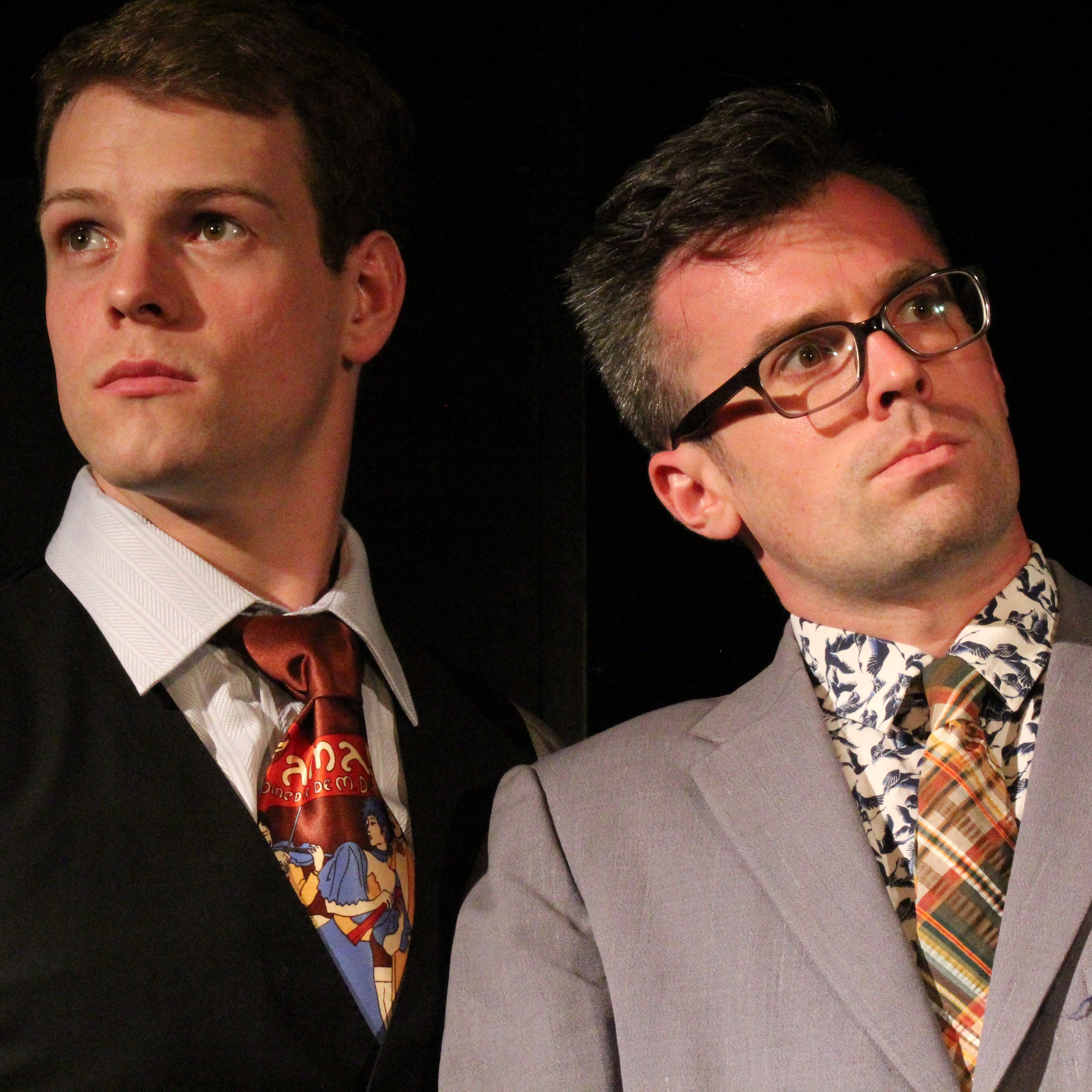 Jake Scott, one half of the improv duo Interplanetary Appeal, is a returning favorite from back in Fringe 2009 when he was on my Top 10 List for Rumspringa the Musical – a play he both wrote and performed in. While I had my issues with some of Rumspringa the Musical, I couldn’t resist its catchy comic premise of “Amish girl falls in love with a robot.”

A similar quirky sensibility infuses Scott’s collaboration with James Rone in this year’s Fringe, Deadline: A Choose Your Own Adventure Story. Rone and Scott have been honing their idea in local improv comedy showcases throughout the year, including good ol’ HUGE Theater, and the hard work has definitely paid off. Deadline: A Choose Your Own Adventure Story is a snappy sampling of long-form improv comedy.

The framework Interplanetary Appeal has chosen is a perfect vehicle for any number of improv scenarios. It’s based on something that itself was a kind of improv in book form. James Rone plays Edward Packard, and Jake Scott plays Ray Montgomery, the two men behind the successful “Choose Your Own Adventure” series of books for young readers back in the 1980s and 1990s (which makes this – gulp – a period piece? I feel suddenly old. Anyway…)

The books were structured in such a way that at pre-determined junctures in the story there was a choice to be made. The reader would choose option or the other, and based on that choice the book would head down a different path.

As this story begins, Packard has moved on and is writing other books, when Montgomery turns up at Packard’s office, begging for one last collaboration. Montgomery has talked the publisher into putting out one last edition of “Choose Your Own Adventure” but only if he can convince Packard to write it with him. The two actually wrote the novels in the series separately all those years, with one exception. Copyright issues eventually drove a wedge between them. This fictional last chance collaboration is something the audience sets in motion and continues to guide throughout.

“They’re gonna ban that book faster than you can say ‘ban a book.'”

Before they unfold the initial Packard/Montgomery framework, Rone and Scott ask the audience for an example of a career (they hastened to add, but not quite fast enough for our crowd, a career you would like to see a play about). Someone called out “Astronaut!”, but not before someone else beat them to the punch with “Teacher!” And so it begins…

“Where did we leave those (invisible, mimed) copies? I think they were right here.”

Except for a couple of grumbling asides, the duo gamely created not one but two teaching adventures. In the first, Scott was a gym teacher facing school cutbacks but also the possibility of joining a union. Unfortunately, after deciding to unionize the children to attack their school principal overlord, Scott learns that his teacher has signed not a union contract, but a contract with the devil for his soul. The final choice – go on a mission to retrieve his soul, or hang out and have drinks with the school secretary and her co-workers.

“The contract you signed, did you read it?”

The second scenario found Rone as a science teacher running afoul of an unhappy parent and her minister, who didn’t take kindly to all that evolution stuff. When meeting with the minister, the science teacher was struck down, not by God, but by a sandbag falling from the rafters. Upon further investigation, Rone discovers Jennifer the Missing Link living up there and helps her escape – to the consternation of the faithful. The final choice – to dupe Jennifer the missing link into believing you have feelings for her so you can keep her around for research purposes, or to simply lock her up and study her, write an amazing paper and sit back to drink in the world’s acclaim.

“You’re just praying in the middle of our conversation? That’s rude.”

Your plot scenarios will of course be completely different, for every audience chooses a different career, and every career path forks in many different directions. Between the two plots in which one partner takes the lead, the other a host of supporting roles, the two authors return to Packard’s desk and squabble over how “that first story idea is never going to fly with the publisher” (the publisher isn’t big on unions, unions are tools of the communists! what, you think the evolution vs. organized religion plotline is going to be less tricky for them?) Ultimately at the end, they find a way to bring their two plot strands together (perhaps they can unionize the missing links!) and agree that maybe this one last collaboration wasn’t such a bad idea after all.

The sense of conflict at the start, as well as the notion of two different stories in which they each take a turn in the role of hero vs. second banana, and the plot reboot in the middle, means there’s more going on underneath the surface of the improv that’s fueling the choices. Keeping that extra layer of the plot in play gives the scenario an added level of difficulty which is fun to watch play out.

“You teach in the music department. If there are cuts, you should go first.”

Also, sometimes the audience choices clearly appalled the character/performers, as when the audience chose to string poor Jennifer the Missing Link along and let her believe that the science teacher was falling for her, just in order to keep her in line to use as his research project. Well, they have a way of compensating for that. It seems the female missing links devour their mates. Ooops. Bad strategy, science teacher. The end. Then the duo steps forward and lets us know they can turn back the chapter to the other (less morally reprehensible) choice and let that one play out instead. When the audience chose to have the gym teacher ditch the search for his soul to have a chance to hang out with a cute lady, he warned her, “I don’t have a soul, is that going to be a problem?” “That’s OK,” she replied, “I’ve got enough soul for both of us.” The end.

(Side note – I have to say again how much I appreciate good improv artists who don’t get hung up on issues of sexuality, these guys being an example. Sometimes the supporting character in the scene is a woman. Whether they’re a convincing looking woman or not isn’t the point so much as that they commit to it emotionally. If the characters are interested in each other, the guys don’t shy away from getting close or wink at the audience as if to say, “Totally not gay here” or “What a joke, right?” They play the scene. The fact that it’s two guys playing out the scene isn’t a big deal to them, so it isn’t a big deal to us. Nicely done.)

“Do tears mean the same thing to your people?”

With multiple choices at several points in each story thread, Rone and Scott may be making their lives harder, but they’re making for a more engaged audience, which is a smart way to go. Also, it keeps them from getting bored, or running out of ideas (not that I imagine either of those problems ever presents itself for these guys). Gotta be on your toes when you’re willing to take the audience on as a third improv partner.

“You dumb sh*t, they can’t put on earmuffs if they’re doing pushups!”

Deadline: A Choose Your Own Adventure Story is a great way to give the audience the illusion of structure (which just makes some folks more comfortable) while still giving long-form improv the free rein it always has to go anywhere it wants. Clever idea, smartly done, and it’s never the same show twice.