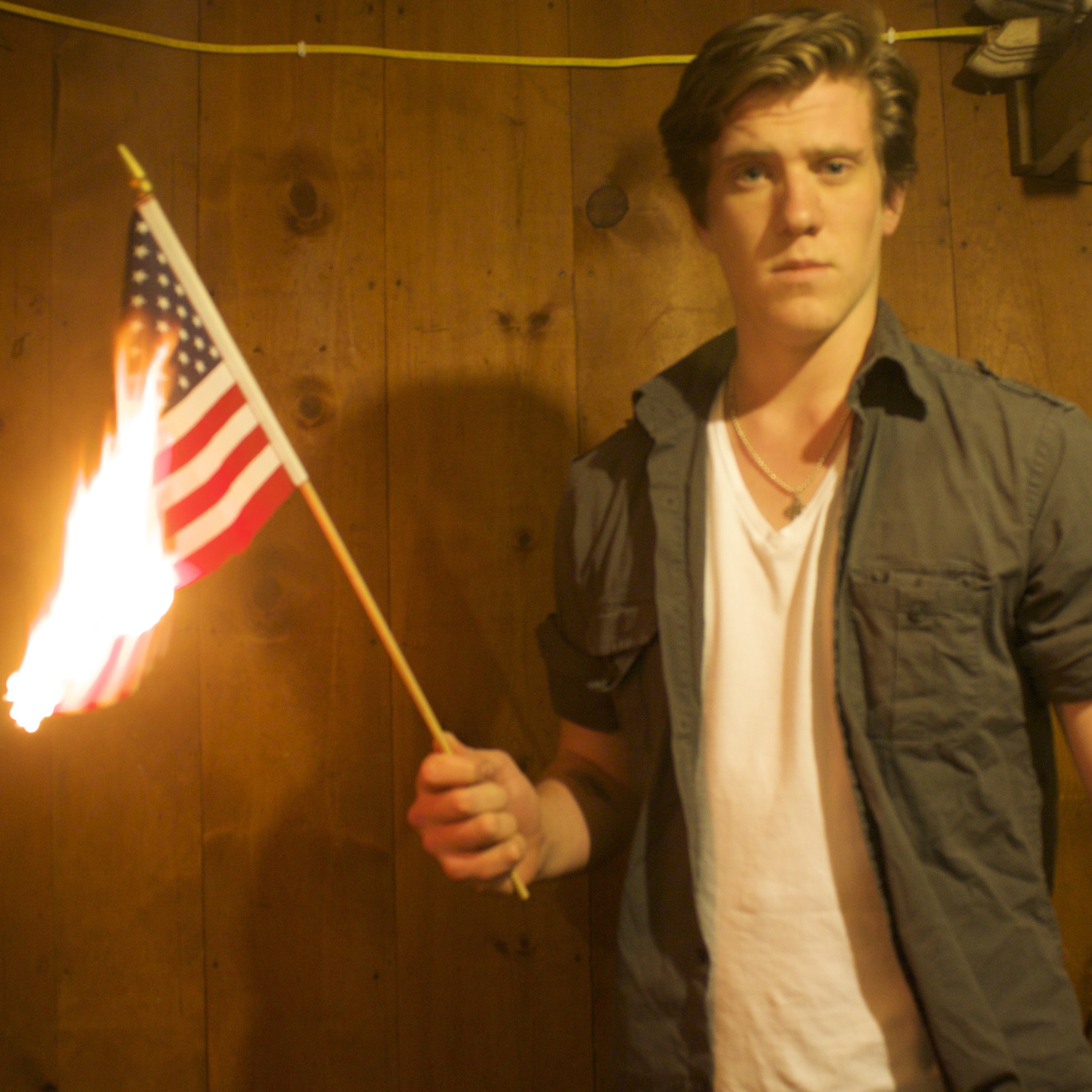 “You show me one instance of non-violent revolution, I will bow down and kiss your feet.”

The Day The Nineties Died is an incredibly polarizing production. In fact, Mom and I were warned off going to see it, more than once, on the day of the performance. I’m so glad we didn’t listen.

Because The Day The Nineties Died was recommended to us by someone who knows I like new plays. They thought the production was tackling some big issues in new ways, and for that reason alone it was worth seeing. Mom and I happened to run into the person who recommended the show right after seeing it and we said, “Thank you so much for telling us to see that show. We both loved it!”

And The Day The Nineties Died doesn’t seem at first glance like an easy show to love. The production is described thusly…

“At the dawn of the 21st century, a group of anarchists plan an attack on an international summit of globalization leaders. But will their idealism give way when confronted with the reality of destruction?”

“If they didn’t have commercials, how would I know what I’m supposed to buy?”

It’s only now that I sit down to write this review (must post quickly, get the word out, see this show) that I see they billed it in the “comedy” and “satire” categories. The production description of “hair raising yet hilarious” is actually more apt. Because The Day The Nineties Died is funny. Often very funny. But the underpinnings of it are deadly serious.

“If you don’t familiarize yourself with the issue, how are you any different than Timothy McVeigh?”

The weird thing is that it’s not about the disillusionment of youth that leads to apathy and indifference. It’s the kind of disillusionment that leads to action. These characters want to fix things. They’ve just come to the conclusion that they only way they can do this is with bombs. What’s fascinating is that you not only understand them, you kind of agree with them. And that’s the point where you start to think, “OK, either they’re crazy or I am, or we all are.”

“You were one of ‘those’ girls. What happened?”

The chief strengths of this strange and wonderful script are the youth, humor and intelligence of its writer/directors – Anders Lee and Ben Yela. An older playwright would have gotten the voice of the characters wrong. You listen to the characters speaking and you think, “This isn’t somebody guessing about the way young people talk. This is actually the way young people talk.” (Edited, yes, none of us are this erudite in real life, but the correct impulse behind the language is there.) This is an extrapolation of all those “what the hell’s wrong with the world right now?” discussions you have the luxury of pursuing in college. The next question, “what’s it going to take to change things, and how can we do it ourselves?” are taken to their logical extreme here. Perhaps the authors started with “what would it take to convince me that blowing something up was the correct solution?” and backtracked from there. However they arrived at this script, I’m glad they didn’t let anyone talk them out of it.

I’m also glad they found this cast to help them. These are some fine young actors. They have better control over their voice and manner than some actors I’ve seen at this year’s festival with twice their age and experience. They make the discussion of this anarchists’ plot, and the reasons behind it, so easygoing and unforced, it’s both amusing and more than a little terrifying.

“You guys have no grasp of fen shui whatsoever.”

Martin (Sam Pearson) brings his high school dropout sister Maya (Suzi Gard) back into his life at exactly the wrong time. Sure, Maya needs to escape their abusive parents. But Martin’s on the verge of attacking an international summit of the WTO, World Bank, and IMF with his fellow believers Nivea (Chelsie Newhard) and Jack (Jeff Shockley). When Martin first informs Maya of the plan, she recoils, but Martin makes a convincing case (and he’s her big brother) so he brings her around. After getting their final instructions from The Specialist (Yela), the group plays host to a couple of college jocks that Maya picked up nearby. Chad (Lee) and Brad (Luther Nelson) are momentarily swayed by the lure of cheap beer and pretty girls, but only one of them has an epiphany that sticks. The next morning the bombs are set and ready to be triggered…

Yeah. They go there.

It’s not video footage. Just the soothing voice of Aaron Brown on CNN, after the planes have both hit, as people are still trying to process what is happening. And then the buildings start to fall…

“There are no words…”

This is actually the first use of 9/11 in a play that’s ever worked for me.  A big part of it is the way the actors sell it.  But it’s the right choice for a play making this argument.   Ballsy as hell, but right.

And you know what? They don’t.

Right to the very end which is swift, surprising, economical, and perfect.

“These are fantastical times. Buildings are on fire.”

There are little things that nagged me like “Why are they leaving the briefcase in the hotel room?” “Why are they coming back instead of just heading out of town and watching the news coverage from hundreds of miles away?” But that’s me as an audience member, focused, laser-like, on all the details because part of me wants them to get away with it. And, honestly, that’s little stuff that I’m willing to gloss over given that so much of the rest of it works so very, very well. This is hopefully not the last we’ve seen of this play, and that’s what minor cosmetic rewrites are for.

“You’ve gotta look at this like it’s an honor. You’re going to be a part of history.”

This play could only have been birthed in an incubator like the Fringe, because it needs an audience to grow. And the Fringe makes it so much easier for this play and its audience to find each other.

You want a play that makes you laugh, seduces you, then gives you a little slap on the back of the head?

You want a play that makes plays seem like they’re worth a damn?

You should go see The Day The Nineties Died.

Callow Youth Productions, my ass. We should all be so callow.

The Day The Nineties Died isn’t for everyone. But it might be for you. Don’t let anyone talk you out of it.