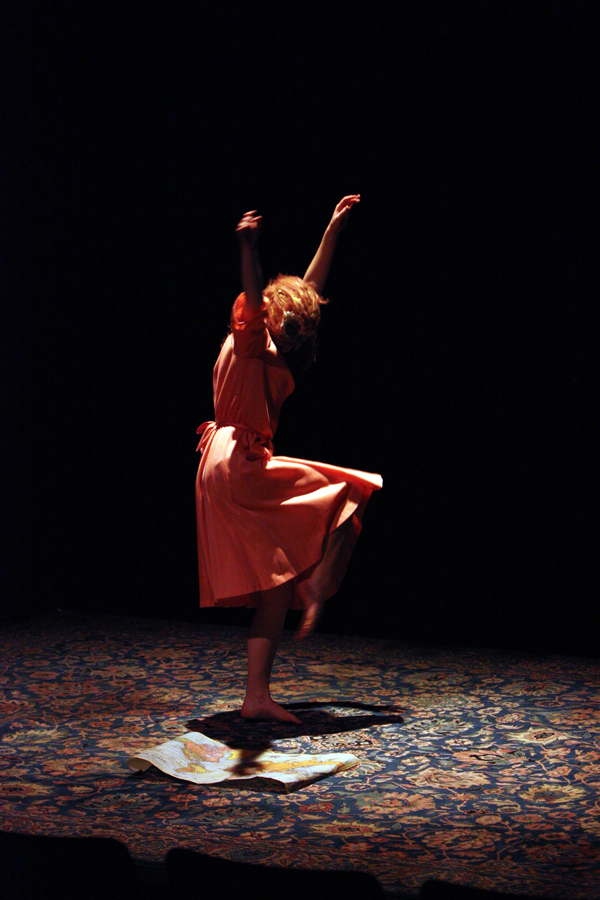 The Attic Room from the Chicago dance troupe RE/Dance Group may be a case of both me and Mom paying too close attention and getting in our own way.

We probably just should have set the program for the production aside and let the show wash over us a bit more. The program indicated the piece was one 45-minute dance theater work in 26 segments. I immediately start doing the math. Mom was trying to follow along in her program in the near dark. If we’d been less interested in trying to figure out where one segment ended and the next began, we’d probably have entered the world of the overall piece more easily. The emphasis in our heads should have been more on “one 45-minute dance theater work” and less on the demarcation of the 26 moving parts. Because one segment flowed into the next fairly fluidly most of the time. It wasn’t so much about beginnings and endings within the framework as it was an overall accumulation of experience.

When it’s at its best, The Attic Room, has a delightful feeling of whimsy about it. The situation, though strange, is also strangely simple. There are six bird people – Stacy DeMorrow, Carolyn Marcotte, Jonathan Monroe-Cook, Melanie Rockwell, and artistic directors Lucy Riner (the R) and Michael Estanich (the E, and choreographer of this piece). And by bird people I mean human beings in normal clothes – button down shirts, slacks, vests, blouses, skirts, and long dresses – and feathered half-masks over the top of their heads, beaks were noses would be (all designed by Brenda DeWaters). Human eyes are fully exposed within their feathery framework, however, so it feels sometimes more “masquerade ball” than “mutant hybrid.”

The six bird people are in an attic space – two high-backed wooden chairs, stacks of old books, an enormous rug, a rolled-up map, a set of tiny lamps with their own paper shades, and a large wooden basket full of paper cranes set into flight by a large electric fan pointed to the sky. But the space does not confine them. Those these bird people never take flight, their imaginations set them loose. A combination of music, spoken text, and movement create a much larger world.

“Just carry yourself back to me unspoiled, from across that lonesome ocean.”

They hop over small stacks of books like stepping stones to cross a stream. They use their bodies to create a large sailing ship, books sometimes used as oars, rolled map as a telescope. They often look out to the audience as if we were a distant shore they were setting out to explore. They curl up around one another in moments of easygoing intimacy. They dance balancing tiny lamps in their hands. They set one of their own giggling as they tickle her with their feet, holding her aloft while laying on their backs in a group, legs straight up in the air. They create an undulating mountain range for one of them to walk over, the back person in line shifting up to the front as the walking dancer steps from one person onto the next, keeping the human pathway twisting and turning.

Best to just let the spoken text wash over you as well (by Estanich, Larry D. Thomas, and the company). It’s more poetry than dialogue. Like the movement, it’s evocative rather than specific – opening the attic world to the larger one beyond with a feeling of wanderlust and mystery, rather than specific details we’re meant to understand and take literally.

“I once thought I was made of glass.”

The music worked for and against them. Like the spoken text and the movement, it was best when it was less specific. Instrumental passages worked most effectively, feeling most like a soundtrack to their adventures. Often the lyrics to songs did more harm than good. I’m sure this may also have to do with the personal experience the audience members have with certain songs which they bring in with them. Much as I enjoy hearing the old pop tune “Magic” from The Cars, or Barbara Streisand belting out “Don’t Rain On My Parade,” they pull me out of the action. I start thinking “music video,” or wondering where exactly this music is coming from, as if it should have a source in the attic room (a stack of a dusty LPs by an old phonograph maybe). Because I have a specific feeling about certain tracks, I start to ruminate on what significance the music has to the bird people and why they chose to listen to it.

I do have to thank them though, for introducing me to Nanci Griffith’s cover of Bob Dylan’s “Boots of Spanish Leather.” That six minute stretch of music and movement was among the production’s most successful. A perfect marriage of source material and new context among those six human-bird bodies. It completely enchanted me. (I’m actually listening to Griffith warbling that ditty on a loop while I type this review.) For that segment alone, this attic is well worth visiting, but there’s much more to enjoy. Just check your brain at the door, set the program aside, and follow where the bird people lead you.