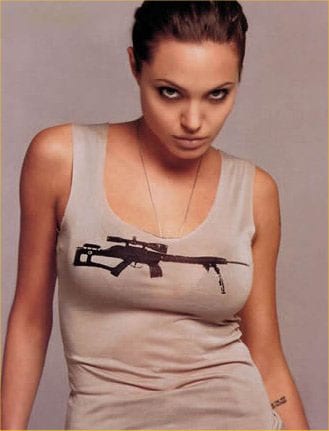 Mom laughed a lot all the way through Partizan Theater‘s latest Fringe offering, Angelina Jolie is a Zionist Whore! or, Plan 9 from Baghdad. I also laughed quite a lot. The show has the added benefit of having one of the catchiest titles in the whole festival, which people have great fun saying in casual conversation.

“Where are you headed next?”

“I hear she’s a Zionist whore.”

“Funny, I heard the same thing.”

In fact, the two jokes that provide the play with its title set the bar for witty humor that the script consistently holds to throughout. This is a sharp, well-written comedy which Mom likened to classic Abbott & Costello antics, and that is great way to shorthand a description the kind of evening you’re in for here. Their publicity blurb also sums it up better than I could…

“Three bungling Iraqi insurgents (Ari Hoptman, Catherine Johnson Justice, Joshua Will) somehow manage to kidnap an American television correspondent (Alex Cole), but quickly learn to their dismay that they might have grabbed exactly the wrong guy.”

These insurgents can’t even get their improvised explosive device to go off properly, or in a high traffic area. They barely startle a donkey with their ill-timed mayhem. The only reason they manage to nab a hostage is that he walks in looking to use their restroom. Not surprisingly, he manages to outwit them. Their awkward attempts at creating a hostage video which close the show are hobbled by things as simple as the props at their disposal. The most threatening implement they have on hand is a spatula. Even the hood for their hostage is reduced to a hilarious Hello Kitty pillowcase.

My only bit of cognitive dissonance here is that I went in expecting a satire, comedy with more of a serrated edge to it. Not sure why. Maybe it was the pedigree of all the artists involved (which is considerable). Maybe it was the location in which the comedy was set. But I was expecting a touch more menace. At no point did I fear for anyone’s safety. The stakes were low and remained so. This is not the fault of the play or the performers. This play was produced for exactly what it was, to elicit exactly the effect (raucous laughter without a hint of discomfort) that it received from the crowd.

It seems that I just have a hard time in general laughing at anything in this particular context. (Even though I laughed a lot at this Fringe show.) Again, my problem. Maybe the only way we get through the mess we made in the Middle East over the past decade is to laugh at it. Plus, Angelina Jolie is a Zionist Whore! or, Plan 9 from Baghdad isn’t really about Iraqi insurgents and the unwelcome invasion of their country by the United States of America. It’s the Three Stooges with a different face. And that’s a good thing for a Fringe comedy to be. A good way to unwind after a long day of Fringing.