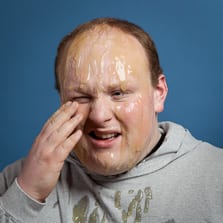 Dripping in Spit: The Resurrection of Father Louis Hennepin by Chasin the Cheese

Okay, so — this is one of those shows I’ll confess caught my eye early on, largely because it’s one of those I-swear-I-had-this-idea-already situations. Father Louis Hennepin is a historical personage who’s always fascinated me — he easily merits a full-length show — and, in fact, I have piles of notes and research buried somewhere laying the groundwork to do just that. Looks like someone beat me to it.

The interesting thing about the guy is the fact that — well, historians have long characterized him as an extremely mendacious personality, almost a Baron Munchausen of the early Americas, and as nearly as I can tell the data seems to bear that out — he’s somewhat infamous for significantly altering his own stories from edition to edition of his work, and that’s been exhaustively documented.

This show takes issue with that, claiming that he was both misunderstood and misrepresented by…well, what seems to be nothing less than a kind of conspiracy against him. I’m not necessarily sold on this, but, okay, I’m prepared to follow it for the purposes of a play.

The play itself is…okay, well, it largely consists of alternating between a traditional, dialogue-driven drama, and a kind of direct-storytelling-to-the-audience in the character of Father Hennepin. I’ve seen this sort of experiment performed several times, and this is one of the less successful examples of that — I found myself bewildered at several points (“Why is he explaining all his thoughts and feelings to…oh, okay, I get what’s happening”).

But, wait…I think it goes deeper than that™. I’m extremely uneasy with the practice of putting words in the mouths of historical figures, which is, yes, kind of the heart of historical drama. But even so, I would have preferred some ambiguity. I didn’t need to know exactly what he was thinking and feeling at every given moment — I would have been perfectly happy to observe his words and actions, and draw my own conclusions. There was something strangely invasive about the asides.

Likewise, the characters had that awkward tendency to — in much of their dialogue — explain to each other things that they already knew. And, yeah, it’s a way of clueing us in, but boy was it heavy-handed. I’m very much in the camp that, if you’re taking me to another place and time, it’s okay if I don’t understand the significance of everything that goes on — I’m happy to observe and figure things out as I go.

(One thing that I *did* like, and that actually goes a long way for me, was the fact that no accents were affected, either European or native — we heard them as they likely heard themselves, and each other. There was also an unusually clear-eyed portrayal of the sheer brutality of many of the Native American tribes — quite politically incorrect, and also quite historically accurate.)

One of the stranger aspects of the attempt to redeem Father Hennepin — claiming that he was unjustly slandered — is that, in order to do so, they kind of have to slander everyone else (including, most notably, Robert de LaSalle), which I find a morally dubious prospect. History aside — as far as the show goes, it creates a bizarre effect — that of a kind, rational man, surrounded by cackling cartoons.

So, there’s a lot here that’s really interesting, and even as a lot of the presentation didn’t work for me, I’m feeling very sympathetic to the whole project, and struggling to find ways to meet it halfway — when at the very end of the play, one of the actors steps out, and in the author’s voice, proceeds to deliver a stunningly condescending lecture, explaining the message that we’re intended to take away, and…

So many problems with this. Let’s start with the fact that it pulls the play firmly out of the realm of thought experiment — out of being a playful what-if scenario — by claiming to have access to secret knowledge, and to have somehow enlightened us from the conspiracy. Moreover, charging us to go out and spread the good word. And, here’s the thing — you didn’t give me any data. All you did was tell me another story. I have no reason to trust your analysis over that of any other armchair historian. I’m not necessarily rejecting your version of events — but why on Earth should I give it any credence?

(Moreover — the idea that what this play is saying would need to be flat-out explained to me — in a play that has largely consisted of characters communicating in expository dialogue, for fuck’s sake — it’s an act of naked contempt for the audience, on a scale I haven’t seen in quite some time.)

In this aspect of the show, ironically, I find the spirit of the Father Louis Hennepin that history remembers — a spirit of mendacity, willing to boldly state any outrageous claim, knowing that the audience it’s being presented to has no access to the true facts behind it. As the show doesn’t bring forth anything beyond wild speculation, I can’t regard it as anything more than a subversion of history, and that…doesn’t sit well with me.