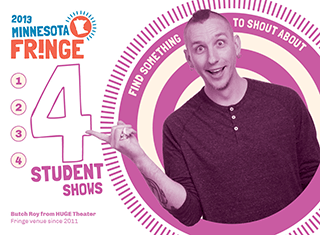 Found this in my inbox first thing this morning.  Here we go…

I like how the Fringe logo drops into view just as the page comes up, as if to say, “Whew, sorry, am I late, did I miss something? Hi!”

*MINNEAPOLIS* – Minnesota Fringe Festival released applications Thursday morning for its 2014 performance festival (Jul. 31-Aug. 10, 2014). Interested performers from across the country and around the state can apply for a spot in the unjuried, uncensored festival. The festival’s lineup of 170+ shows, however, is ultimately decided by a random lottery held in late February.

“The application is very simple,” explained Fringe Executive Director Jeff D. Larson. “We don’t check anyone’s credentials or performance know-how. We don’t even check for a show title. All it takes is the desire to create a performance – the rest is up to the lottery. That’s what’s so exciting about the Fringe – anyone can do it.”

The deadline to apply for the 2014 Minnesota Fringe is February 14 at 5p.m. CST. The application along with instructions to apply can be found at fringefestival.org.  The fee to apply is $25.

Minnesota Fringe is the one of the oldest and largest fringe festivals in the country, now in its 21st year. In 2013, the annual festival issued 50,007 tickets for 895 performances of 176 shows and featured the work of over 1,100 artists. The festival returns at least 65% of ticket sales to the participating producers; in 2013, over $245,000 was paid to artists.