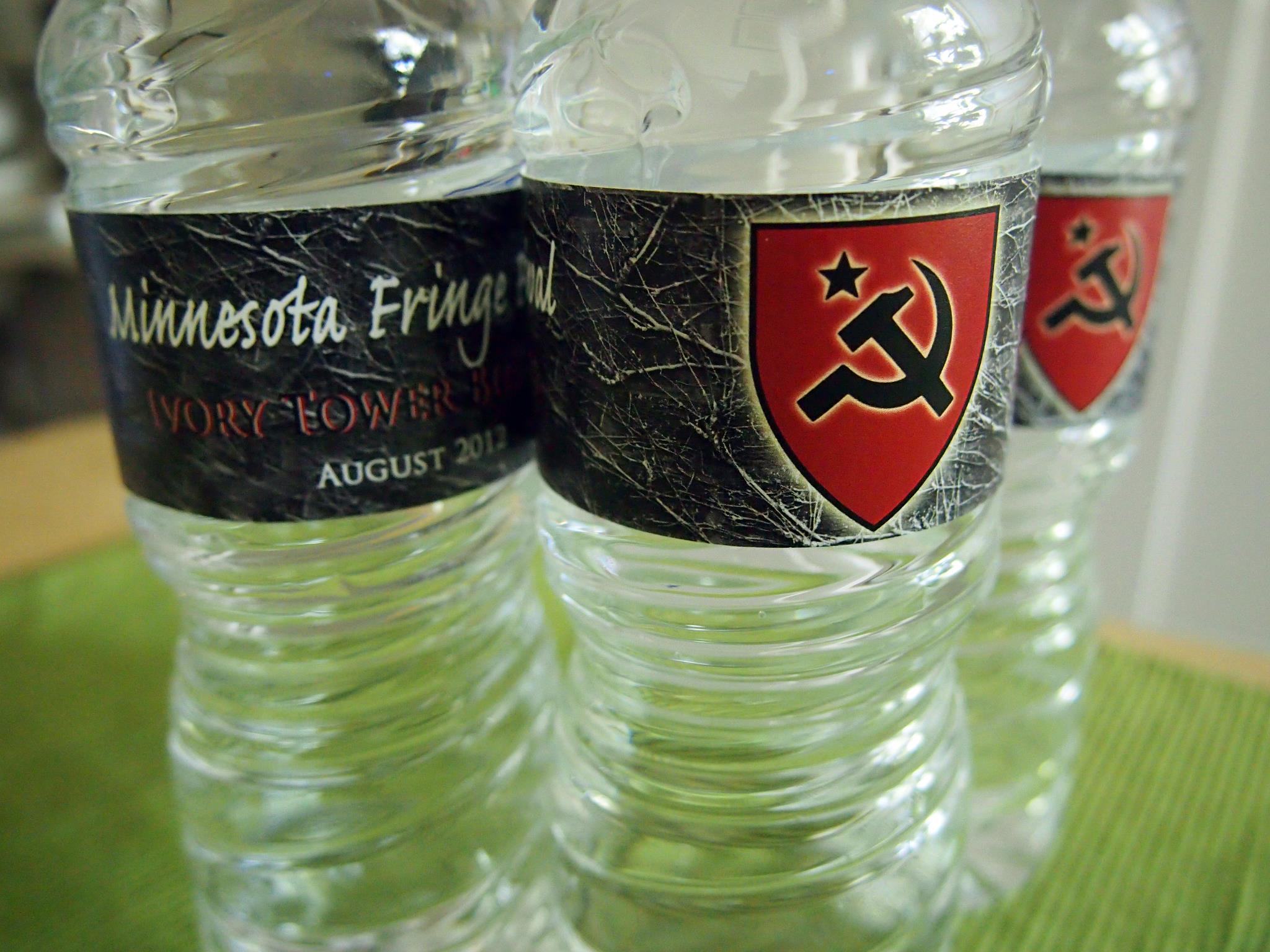 On Saturday night, I found myself in the very unaccustomed position of looking at the back of a stage curtain, listening to an audience gather on the other side. Five years since I started writing about theater for the Daily Planet and 19 years since I last acted in a play, I was performing in my own Fringe show, Ivory Tower Burning.

How did it go? It went great. Those fundraising appeals aren’t lying when they say that you—the audience—complete the production. Though my co-star (who’s also my brother) Joe and I ran through the entire show twice on Saturday afternoon, the show really wasn’t finished until it had aired in front of an attentive audience. It was a genuine thrill to feel my script come alive in the cozy confines of the Bryant-Lake Bowl Theater.

Then it was my turn to wait for the reviews to come in—and whew, they’ve been good! We’re averaging four and a half stars in audience reviews, with comments including “smartly written, well-executed,” “engaging,” and “must see!” For a show with a profanity warning but no nudity warning (nary so much as a tweed blazer is removed), we’re also apparently providing good eye candy; Daily Planet Fringe bloggers Matthew Everett and Kate Hoff have both commented on my brother’s attractiveness, with Kate going so far as to suggest a euphemistic interpretation of the show’s title. Welcome to the Fringe, Joe. (Oh, and sorry, everyone…Joe’s taken. His girlfriend made those sweet water bottles, above, for us.)

In past years I’ve loved biking around town and checking out as many Fringe shows as I can, but between my own show and my several other commitments (including my Daily Planet job, where I’m backed up after an inconveniently-timed family vacation; The Tangential; and two teaching jobs), I’ll be lucky to make it to even a few of these shows. If I was booking the kind of relatively leisurely schedule I had in previous years, though, here are the shows that would be tops on my list.

Ash Land, Transatlantic Love Affair: Audience reviews suggest that Diogo Lopes and Isabel Nelson have done it again, creating a third consecutive stunning show after the triumphs of Ballad of the Pale Fisherman (2011) and Red Resurrected (2012).

The Love Show!, ORL Productions: Courtney McLean is back in the naughtybilly saddle, and I’ve never once skipped through any of her songs when they come up on iTunes.

Nightmare Without Pants, Joking Envelope: Bar none, there is no safer bet in Twin Cities theater than a Joseph Scrimshaw Fringe show.

Pretentious Conversations, Upward Spiral Productions: This would be one of my take-a-chance shows. Their Fringe-for-All preview was hit-or-miss, but as someone whose own FFA bit was regarded as uninspiring, I can sympathize. The postcard is highly amusing, and there are few artists in this world besides Mel Brooks who have the gift of being able to make up genuinely funny names. In this case: Patricia Skylar Van Humphries.

Rip, Dovetail Theater Company: David Darrow and Kara Davidson moved across the country to take up residence in the Twin Cities specifically because of our well-reputed indy theater scene. That’s reason enough to support them, and their show is probably pretty good too.

SuperHappyMelancholyexpialidocious, the Seth Lepore Project: Okay, I probably wouldn’t actually go to this one, since I had the luxury of seeing a longer version of it presented earlier this year at the BLB…but Lepore came out of nowhere to land a Fringe Encore slot with his great show Losing My Religion last year, and I can happily report that this year he’s back with more of the same.

Twist of Fate, Rosetown Playhouse: For the inside story on this fascinating show, check out director Tyler Olsen’s first-hand account of how Minnesota suburban teens came together with teenage refugees from the KaRen community of Burma to create what I hear (from my girlfriend, whose sister worked on the show with Tyler, so okay, now my cards are on the table) is an entertaining, inventive production.

You Smell Like Whiskey and Bad Choices, Raw Sugar: Two years ago, I met Rebekah Rentzel in line for a Fringe show. We went out to lunch, and ultimately became good friends. She’s another transplant to the Twin Cities for theater-related reasons, and last year she presented the one-woman show Tales of the Periously Grounded, recounting her personal journey. This year, she one of the collaborators presenting this Hangover-like show about three ladies who have some ‘splaining to do.