Lake Pepin’s beauty is captivating – from towering limestone bluffs to the nighthawk’s peep soaring over tree-lined shores at dusk. Today, sediment is clogging its waters and settling at a rate ten times faster than what is natural. Its primary source? The Minnesota River. With well-researched levels of nitrate, phosphorous and sediments from agricultural runoff eroding into the banks, bluffs, creeks and ravines, Lake Pepin and a large part of its ecosystem will eventually disappear.

In an effort to learn more about this, an afternoon’s drive through Minnesota’s western landscape of vast fields of corn and soybeans culminated in meeting a pioneer in the farming community of Madison, MN. Here, several water districts away from Lake Pepin, Carmen Fernholz pays careful attention to the symbiotic relationship between land, water, and humans while successfully harvesting his fields.

Fernholz and his wife, Sally, are certified organic farmers of 450 acres in Lac Qui Parle County, near the headwaters of the Minnesota River. According to Patrick Moore, Executive Director of Clean Up the River Environment (CURE), “Carmen has been a shining example of sustainable agriculture in our region for decades.” 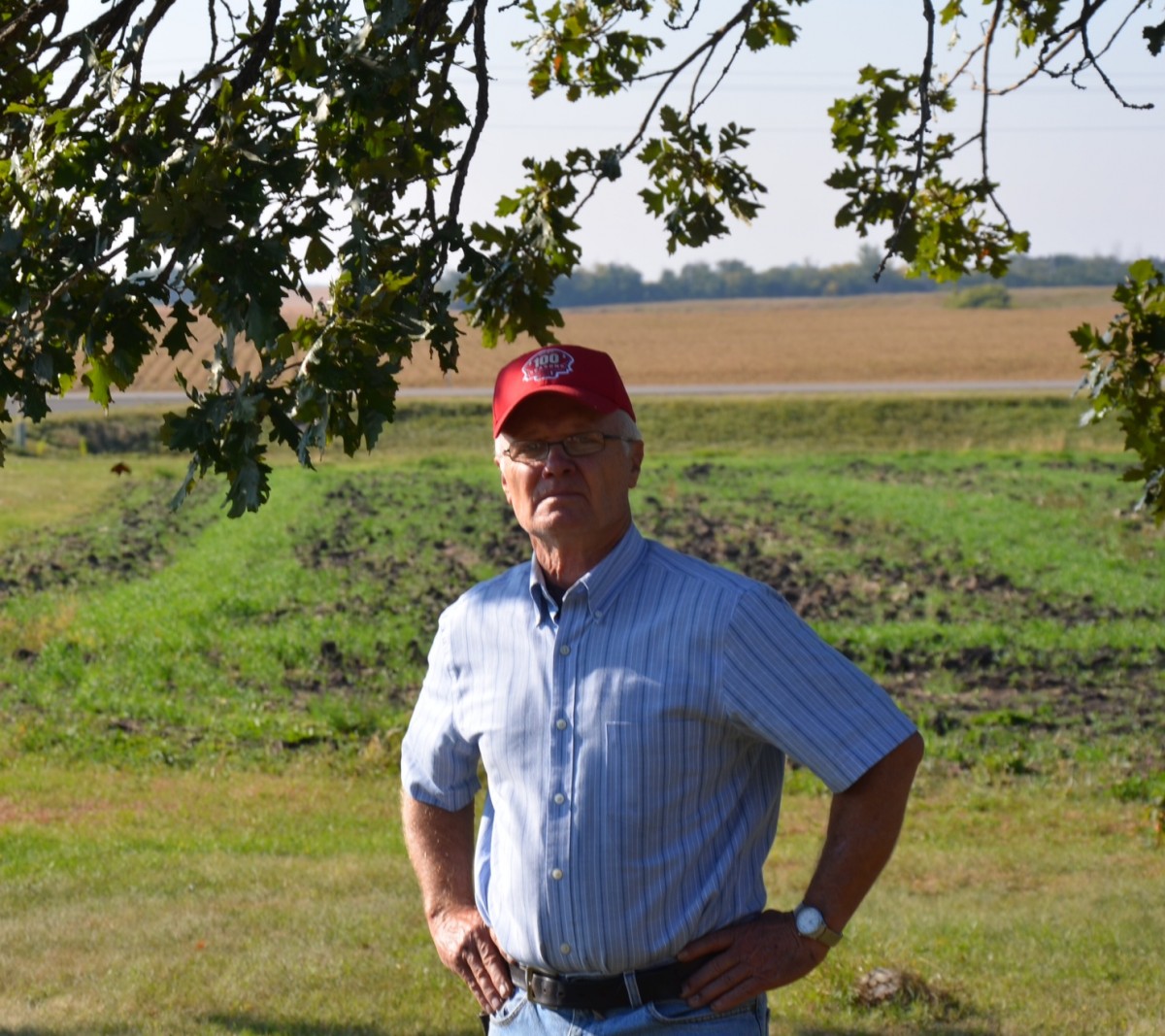 After 39 years of farming, Carmen describes his relationship with the land and water: “There are two elements in farming that are critical: soil nutrients and water. How we can utilize the water, how we can save the water, how we can prevent the water from being destructive – those become the motivations for what I call ‘good management systems’ in agriculture.”

Along those lines, Carmen considers how a plant uses water and harvests crops that are low moisture users. Small grains like oats, barley and wheat are planted in place of corn or soybeans and rotated regularly. Crop rotation enhances the soil structure and helps replenish nitrogen. It also minimizes or eliminates dependence on commercial fertilizers commonly used for corn, which are heavy in nitrogen.

In western Minnesota this year, all farmers have had to contend with heavy rainfall. The risk of topsoil washing off the fields, as well as the flooding of crops is real. Managing water levels is critical. Tiling, dug deep under the fields and widely used for water surplus in the Farm Belt, drains heavily into ditches and into the tributaries and rivers.

Additional conservation methods Fernholz practices include erosion prevention through buffering drainage ditches with reserved acreage for native grasses. Alfalfa fields are planted in rotation to help control weeds, and then mulched to be used as “green manure” or fertilizer.  Through the middle of long fields, patches of tall trees stand as windbreaks to keep topsoil from blowing away. On hilly terrain, diversion terraces have been installed with intake tiles that control its water release. This saves both the crop and the soil.

Water that does run off from the ditches on Fernholz’s land passes through 60 acres of a wetland his neighbor converted from untilled farmland. Here, it is naturally filtered before flowing into the river.

Managing these measures is not the easiest option for farmers. “In this age of ever larger fields being operated by fewer and fewer farmers with larger and larger equipment, to have to look out for grass waterways or field windbreaks or diversion terraces becomes too time consuming,” says Fernholz.  “There is more government incentive through subsidies to grow the corn, soybeans, wheat or cotton than to implement many of these conservation practices.”

These subsidies are listed on the website for the Environmental Working Group which records, maps and quantifies farm subsidies for every state under the current farm program. Financial support does exist in Minnesota for some conservation measures.  It was the Conservation Reserve Program that funded Carmen’s diversion terraces and the Wetland Reserve Program that helped convert his neighbor’s farmland.

Many of these measures, such as controlled flow drainage tiling, are costs that have to be paid out of pocket. Fernholz believes they result in a more beneficial crop and healthier soil, which, in turn, makes them economically viable. In addition, he participates in O-Farm, a marketing service that negotiates collective prices for a larger group of organic farmers who have come together. This has resulted in successful financial returns.

Why, then, haven’t more of these conservation measures and organic efforts taken hold along the Minnesota River Valley?

“Farm policy is driving the changes on the landscape, but I think a bigger part of it is cultural,” Moore said. “It’s so much easier to go along with the mainstream. For all of the science and information that we can present on this issue, in the end, it’s a cultural and anthropological issue. It’s how the people feel supported—and their fears.”

“Risk is one of those fears,” said David Craigmile, a conventional farmer of 350 acres and a long-time volunteer as the secretary of the La Qui Parle Yellow Bank Watershed District.

Fear was also a factor in the brouhaha over the Troubled Waters documentary, released last year. The film, by the U of M’s Bell Museum of Natural History, focuses on agriculture, pollution, and sustainable solutions. While strongly critical of federal farm programs that encourage heavy planting of corn and soybeans, the film interviewed many farmers who are working to find ways to reduce damage to the Mississippi watershed. Molly Priesmeyer, reporting for the Daily Planet, wrote:

Troubled Waters offers an intriguing glimpse into how political interests, the need for fuel, and emphasis on grain production have played a major role in environmental issues that detrimentally affect Lake Pepin, the Mississippi, and the Gulf.

Federal farm programs, state and federal water protection policies, farmers’ choices of crops, tillage methods, drainage and erosion control — all of these decisions play a part in determining the future of Lake Pepin and the entire Mississippi River. Fernholz’s commitment to the health of Minnesota’s land and waters provides one example of a way forward.