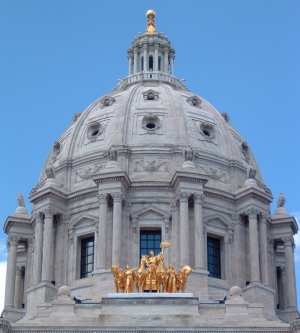 The Minnesota Family Council released poll numbers on Monday that it says shows an advantage for GOP candidate Tom Emmer when the issue of gay marriage is put before voters. Commissioned by the National Organization for Marriage, the poll shows that DFL candidate Mark Dayton has a strong lead over Emmer – 42 percent to 33 percent – until voters learn of each candidate’s position on gay marriage. Respondents then chose Emmer 42 percent to 36 percent. The poll also showed 54 percent supported marriage as “one man and one woman,” compared to 40 percent who said it could be “any two people.”

“The poll points out that Minnesotans strongly support marriage between one man and one woman, letting the people vote on a constitutional amendment, and gubernatorial candidate Tom Emmer because he’s the only gubernatorial candidate who supports marriage,” said Tom Prichard, president of MFC, at a Capitol press conference. “This should serve as a wake-up call to those seeking office that people feel strongly about marriage and any attempt to redefine marriage… will be met with electoral consequences.”

The poll, conducted in late August and early September via telephone, surveyed 695 likely voters and has a margin of error of 3.8 percent. (MFC didn’t say whether the poll was conducted on landlines, cellphones or both.) Prichard didn’t know the cost of the poll, which was done by Lawrence Research.

He said his group, along with NOM, will be ramping up radio, television and mail advertisements on the issue.

“For our state, the spending will be significant… Much more than in past years.” he said. The two groups will be spending in the hundreds of thousands. “The resources will be there,” he added.

The poll differs from one released by Minnesota Public Radio in early September, which found a slight majority of respondents opposing gay marriage (51 percent to 40 percent) and nearly two thirds of Minnestons (64 percent) supportive of allowing same-sex couples to enter into legal arrangements such as civil unions. Only 30 percent opposed relationship rights for same-sex couples.

The NOM poll asked if marriage “should be redefined to be any two people regardless of gender” and found that 54 percent of people rejected that idea, while 40 percent supported it.

When the poll presented voters with the candidates’ positions on same-sex marriage (Dayton and Horner support it, Emmer opposes it), the numbers change to 42 percent for Emmer, 39 percent for Dayton, 9 percent for Horner, with 10 percent undecided.

When poll indicated that Dayton and Horner do not support putting a constitutional amendment on marriage on the ballot, respondents shifted, with Dayton losing three points to Emmer. Emmer stayed at 42 percent, Dayton got 36 percent, Horner remained at 9 percent, and 10 percent were still undecided.