Minnesota’s unemployment rate remained at 7.2 percent, slightly less than the nation’s average of 9.1 percent, according to data released by the Minnesota Department of Employment and Economic Development (DEED) Thursday. 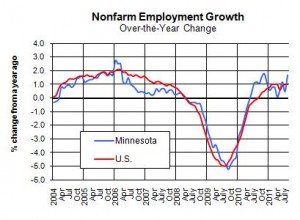 The lackluster numbers were “skewed by the “smoothing” of data that understated the impact of thousands of state employees returning to work en masse,” according to DEED.

But the state did add around 5,800 jobs in the private sector in August, much of the gain coming in the construction industry.

“We have seen state manufacturers, construction companies and other private businesses add more than 42,000 jobs in the past four months,” DEED Commissioner Mark Phillips said in a statement.

Losses in areas like the hospitality industry, which dropped 3,300 jobs last month, evened out the unemployment rate for August.

The state has lost about 2,600 government jobs as local governments tightened their belts. The Mankato area has shown the most job growth in the state this year.