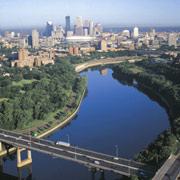 There is much talk about the Commons and “Death of the Commons” these days. A basic library journal search shows more writing on the subject in the past two years than the dozens (and hundreds) that preceded them. A brief primer for those unfamiliar to the concept of Commons: The initial concept applied to land used for the good of the whole community, and that it ought to not be enclosed to benefit the good of a single person.

The oppositional next leap (because there is always an oppositional next leap) was the inalienable right of people to property. With that counter-argument, supporters of each view set into motion a chronic debate. It is the stuff of lawsuits and keeping a veritable army of lawyers in abundant salary. Over the years, the commons has come to encompass a great deal more than land use issues, though they remain (forgive me) the foundation. The present era argument for the commons has come to include everything from genetic material, diseases, and radio bandwidth to the languages we create.*

In Minnesota, our Commons have the same range of issues and disagreements. Is a stadium worth publicly financing if I can’t pop by to use it at my own leisure? If trucks hauling sand in Winona wreck the roads ten times faster than normal wear and tear, shouldn’t the company paying for the movement of the materials also repair the roads? Also, there are the limited versions of the commons: I help pay for the streets, but they are maintained, policed and managed by other entities (most of which I also help pay for with my tax money).

In his article “The Future of the Commons,” CUNY Professor David Harvey examines the role of work, value, and property rights, among other topics. In his article, Harvey correctly points out the history of enclosure (i.e. creating a commodity from what was previously held in common) fails to fulfill common interests.

If you’re thinking all of this sounds vaguely familiar in a “99 percent versus one percent” fashion, it is. Here are a few recent examples: ALEC at the Minnesota legislature; the Koch brother’s disproportionate influence in Wisconsin; the housing bubble and anything related to Wall Street, to name a few.

Harvey goes on to say, “….that the unified effect addresses the spiraling degradation of common labor and common land resources…. The point is not to fulfill the requirements of accumulation for accumulation’s sake….the point is to change all that and to find creative ways to use the powers of collective labor for the common good.”

Of this point the Minnesota legislature should be acutely aware as they all face re-election in 2012. The 99 percent are watching and by my count, no matter how much influence can be obtained by the one percent, my public school taught me that 99 is greater than one.