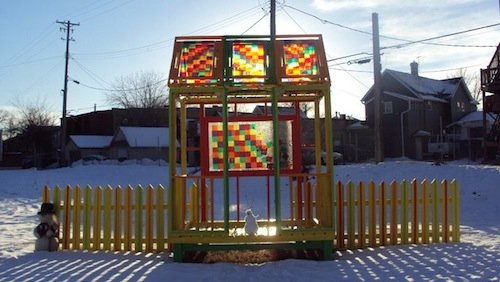 Installation by Mary Jane Mansfield by Artists in Storefronts

I took a trip back down memory lane while reporting the Minnesota College Choices series last week, talking to young people getting ready for their first year of college. It’s such an exciting time — you get to re-invent yourself a little, or at least figure out a little bit more who you are. For myself, I thought about various liberal arts majors- — English? Philosophy? History? I was not really making the connection that these choices wouldn’t necessarily lead to a job at the end of school. I ended up deciding on a theater major because, though I knew the career options were slim, I just really liked theater and wanted to at least spend four years doing it. Then, I had an opportunity to go to grad school on a full scholarship plus a stipend, and my thought was — well, even if this doesn’t work out professionally, at least I get three more years of doing theater.

In hindsight, my reasoning was perhaps not as sound as it could have been. Ten years after graduating I’ve pretty much never made a living as an actor, although I do theater regularly and have gotten the odd teaching or acting-related gig.

Was it worth it? I’m not sure. I guess theater sort of led me to writing, where I’ve managed to carve out a modest, unconventional career. I’m not sure that majoring in English or philosophy would have led to more lucrative careers. A couple of the people that I talked to for the Minnesota College Choices series (see end of this article) either are currently pursuing arts degrees or have recently completed them. What’s interesting is that, though the competition is fierce and it’s nearly impossible to make an actual living, you still kind of need training to get opportunities in the arts, even the ones that don’t pay very well.

Nate Stanger — Starting out as a young artist

Take Nate Stanger, for example. A recent graduate of the University of Minnesota, his four-year total cost was $84,089, including one year in the dorm (he paid his own rent the last three years), fees and books. He had a relatively good gig this summer, stage managing for the Showboat.

Originally, Stanger wanted to be an actor, but he realized in college that it wasn’t necessarily the lifestyle he wanted to have. He got tired of feeling terrible all the time after auditions, and he realized that much of the job wasn’t based on talent. He found that he was good at stage management, where, he said, “if you have competency, doors open a lot quicker.”

Stanger lives simply — he drives his grandfather’s 12-year-old car, shares a basement apartment with a friend and lives quite frugally, according to his mother, Sheila Butler. Butler saved up for college expenses ever since her children were born. For Nate, she had saved enough to cover the first year, and had some money left from her mother to cover the second year. Her husband (not Nate’s father) was deployed in Afghanistan, which covered the third year, and throughout all four years, Butler was saving $400 a month, and that covered his senior year. Plus, Stanger was working 20 hours a week all four years, while taking the maximum number of credits.

After the Showboat season ends, Stanger has shows lined up for the rest of the year, but the pay he’ll be getting as someone just starting out isn’t enough to live on. He estimates he’ll make less than $3,000 for eight or nine months of work, but he feels he has to do that as he starts out and builds connections. One of the stage managing jobs pays $1,000, and at first he was really excited, until he realized how much that actually was per hour. To support himself, Stanger is looking at alternative means of income, applying for administrative work and freelance electrician gigs.

Mary Jane Mansfield spent 2 ½ years at MCAD in the early 1980s, studying sculpture and performance art. For the first ten years after leaving art school, she lived and breathed the “art and punk rock life,” she said. Then a baby came along.

Mansfield got a job as a taxi driver and went back to school at MCTC, where she got her graphic design AAS degree. While she attended MCTC, she worked 12-hour days, four to six days a week, without benefits or insurance. She did qualify for MinnesotaCare and for deferments on her student loans while she attended MCTC.

“I thought I had to get practical and would never be able to finish my fine arts degree,” Mansfield said. She was hired into a corporate job right out of MCTC, but a few years later, her position was eliminated with the economic collapse. Now, she’s at the University of Minnesota, finishing her BFA.

While the cost of college is high, Mansfield said the cost of not going to college might be even higher.

“If you ever have a child and have to work alone or with a partner who is also limited in the range of higher paying career options, you essentially are going to be in survival mode for a very long time, thereby limiting your potential to fulfill your dreams and excel in life with whatever your gift in this world may be,” she said. “There are so many more people now than when I was young and in art school. The expense of nearly everything has gone way up so the ratio of income spent on basic needs to that of higher aspirations, or even having any time or mental energy left to think of such thing becomes silenced to a great degree.”

“The cost of not getting a degree is simply the opportunity cost,” Mansfield said. Degrees for artists are more important now than ever, since there is so much more competition. “It definitely plays into decisions people make on panels when awarding grants,” she said. “They are only human and if they worked to get a degree there is a strong likelihood they would lean in the direction of someone who fits their profile of professionalism where the choice [is] between two bodies of work … similar in strength.”

“My biggest worry now is that young artists who get a BFA may be in the same position I was without one in terms of monetary strength to invest in a career. You need an MFA to teach college level and now for the first time in history there are doctorate/PHD level programs for fine arts,” Mansfield said.

Recently, Mansfield was discussing the situation over dinner with a group of interns at Franconia Sculpture Park. She mentioned the hardships she faced and how the amount of educational debt can impact your family.

“This young woman looked at me almost in tears and said she will never be able to afford a family, and that she has already considered the reality of this fact when she decided to accept the artist she was and finish her education,” Mansfield said. “That is a pretty heavy weight for a young adult to have to consider.”

Recently, Mansfield had a show up at the Ledge featuring 2500 drawings she made during the time she was a cab driver. She drew on typing paper with a ballpoint pen. “I was so poor both for creative time and money that I started buying packs of typing paper and pens and made it a point to draw as often as possible just to maintain a connection and commitment to my creative spirit,” she said.

Because that’s the thing, ultimately about most artists. We do it because we have to do it. There’s something that churns deep inside that basically forces artists to keep doing what they’re doing. Would a degree in business be more economically viable? Most certainly. But that’s not always the most important thing.