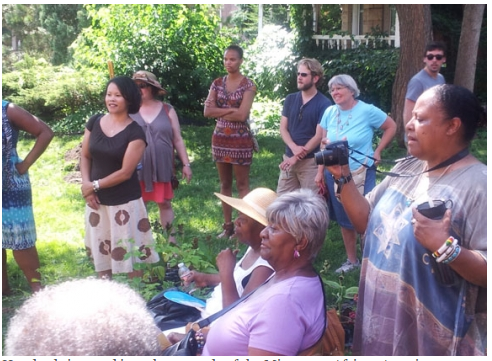 Hundreds jammed into the grounds of the Minnesota African American Museum in Minneapolis to plant trees to celebrate Nelson Mandela’s 95th birthday. They were joined by Fransie Cooper, the Political Consul at the South African Consulate in Chicago alongside Judge (ret.) LaJune Lange, the Honorary Consul of South Africa in Minnesota.

The African American Museum was designated by the consulate as the official celebration site for Mandela’s birthday in Minnesota. July 18 has become known as “Nelson Mandela International Day,” since the United Nations proclaimed it in 2009.

The sweltering heat did not deter those who streamed in all morning and waited their turn patiently to plant trees in the grounds of the museum.

Laetitia Uzarerwa, a nursing student from Rwanda was there to both celebrate Mandela and also to volunteer her time.

“I am with him in spirit and wish him quick recovery,” Uzarerwa said. “He is an inspiration to me and I had to come out here.”

Mandela has been hospitalized since June 8 of a recurring lung infection that has kept him in critical condition. This is his fourth stay in the hospital in the last six months.

At the Minneapolis Thursday event marking his 95th birthday however, the mood was that of celebration as people from different backgrounds and races mingled together in a celebratory mood. Two gentlemen high fived each other that “he made it to 95 man” and each other as they laughed heartily. 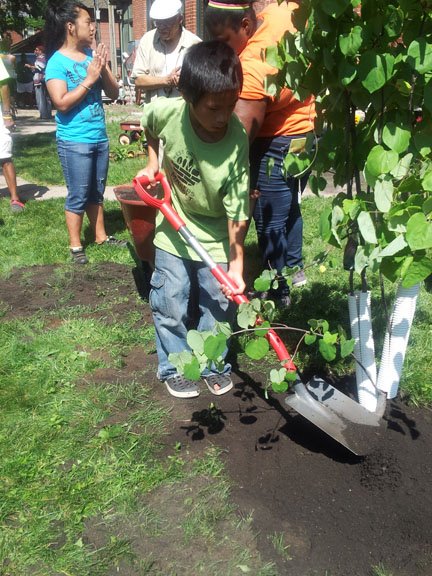 Youth from the museum’s Stevens neighborhood joined with others from around the city such as the Northside gardening task force made up of Summer Step-Up youth working with/for Project Sweetie Pie, Afro Eco, and Ejam and Northside Fresh as were youth from Blaisdell YMCA.

Seng Yang, a seventh grader from the Hmong International Academy, epitomized the energy the youth brought to Mandela day in Minneapolis. He kept refusing help from an adult as he enthusiastically shoveled in the dirt after the tree had been nested into the ground.

At the noon hour, the Mandela Day activities moved to the Cathedral of St. Paul for a public prayer service for the towering Mandela. Father Kevin M. McDonough of the historic St. Peter Claver Church assisted by Deacon Philip Stewart led the congregation in paying tribute to Mandela after the singing of “Lift Every Voice and Sing”.

Civil rights leader Josie Johnson who lobbied to pass Minnesota’s anti-discrimination laws in 1956 did the first reading at the service – Revelation 7:9. Chapter 7 of the book of revelation is commonly referred to as God’s program of grace and salvation during the period of judgment.

Hindia Ali of the Somali Action Alliance did a reading of Archbishop Desmond Tutu’s “No Future without Forgiveness”.

Fransie Cooper of the South Africa consulate in Chicago praised Minnesotans “for celebrating Mandela with us”. 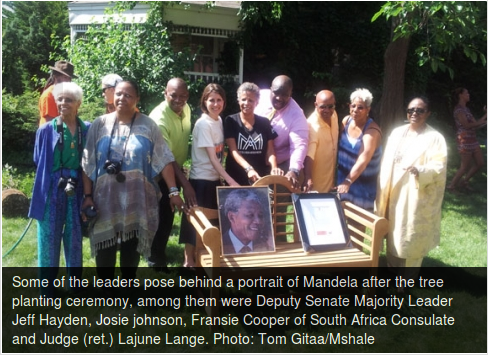