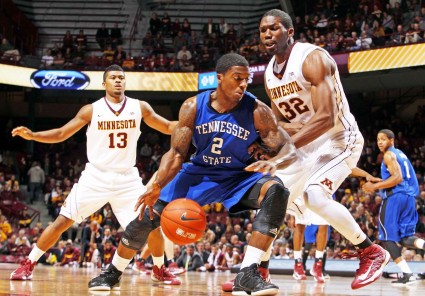 Modern medicine has improved so much in recent years that an anterior cruciate ligament (ACL) injury these days isn’t career-ending for an athlete, but rather a temporary setback.

Historically, “People were really stiff coming out of surgery,” notes orthopedic surgeon Dr. Joel Boyd. “Then the surgical knee was immobilized in a cast, and then began rehab. It would take people a year to come back.”

Boyd, the team physician for the Minnesota Vikings, Wild and Lynx, points out that “accelerated rehab” now is the norm rather than the exception for most athletes. Nonetheless, the doctor says that there’s no substitute for hard work during rehabilitation if the person really wants to get back to action.

“It’s tough, especially the first part of rehab,” recalls Gopher senior forward Trevor Mbakwe, who suffered an ACL injury in late December 2011. The 6-8 St. Paul native is leading Minnesota in rebounds and blocks this season, including a career-high 18 caroms against North Dakota State December 11 and 16 boards against Northwestern earlier this month.

Minnesota Vikings running back Adrian Peterson tore the ACL in his left knee five days after Mbakwe went down on Christmas Eve 2011. He returned to action and rushed over 2,000 yards in the 2012 season.

In both cases, Boyd credits “good genes” among the reasons they’ve returned to their respective teams seemingly stronger than ever. “With most people and athletes, in year one it’s O.K. when they come back. It tends to be better in year two.”

He cites as an example Lynx star Seimone Augustus, whom Boyd worked with after she suffered an ACL injury a few years ago: “The first year [after she returned], she was O.K., wore her brace, but was not quite back,” he points out. “In year two, she was outstanding, and that was the year [the Lynx] won a championship. She felt great and continues to feel good,” says the doctor.

“It was the worst injury I ever had,” recalls Mbakwe.

Just like the Queen Latifah movie Just Wright, where the main character — a pro basketball player — battles back from a serious knee injury, Mbakwe continues, “It’s not easy — there are a lot of ups and downs.” He painfully watched his teammates play the rest of last season, unable to help them. “I definitely had some tough moments, but I was fortunate enough to have a good support group.”

That support group included Gopher redshirt freshman Kayla Hirt, who battled back from two knee injuries. “Along with a couple of [women] soccer [players], we were all in rehab, going through the process. We actually had somebody who first-hand had gone through it, and [that] definitely gives you more confidence. We all pushed each other.”

His confidence was restored when he was able to again dunk a basketball last summer, admits Mbakwe. “There were times when I was thinking would I be able to get my agility and athleticism [back]. But I was able to make some of the moves I was able to make in the past and became more confident.

“It’s a tough process…getting that confidence [back],” admits Mbakwe on the rehab routine, which began after a couple of months on crutches with his knee in a cast. “It’s mental rather than physical. Once I could see myself improving week by week, that was good. You make small goals — hopefully, this week I want to jog without limping, and next week I want to be able to make this cut. You want to make those short-term goals, and I usually did.”

Boyd warns against comparing the Gopher forward to the Vikings’ Peterson, who case “is a lot different.” His knee “was already stronger than what a normal ACL is at the time of reconstruction surgery, the doctor points out.

“I feel good where I’m at,” Mbakwe says. I definitely feel good about myself. I pushed myself to get better.”

Photo: Trevor Mbakwe, #32 at right, is back in action after ACL surgery. (Photo courtesy of U of M)