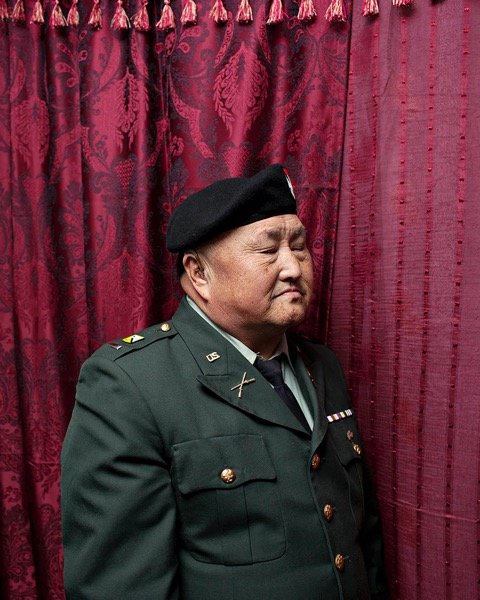 A photo from Pao Her's ATTENTION!

As a society, we are often ignorant of the deeper ideas, the larger events and even the items of material culture that serve to connect us to other global societies, a complicated condition that the installations “ATTENTION!” by Pao Her and Near and Far by Shana Kaplow address in unorthodox and insightful ways. That such links are oblique or overlooked rather than obvious, abstract or intangible rather than specific is the point. As discrete but complementary projects, “ATTENTION!” and Near and Far innocently unite to create one of the most quietly beautiful and intellectually resonate MAEP offerings in recent memory.

With the recent 40th anniversary of the Fall of Saigon on April 30, 1975, Her’s installation “ATTENTION!” is salient. It comprises ten archival ink-jet prints of Hmong Vietnam war veterans from California, Minnesota and Wisconsin who wear military dress and stand stoically before a curtain of rich burgundy brocade. Dramatically lit and mounted high on the gallery’s walls, the stoic portraits watch over a vitrine in the center of the room displaying vividly colored military ribbons and medals. A recording activated by a motion sensor barks out the military command “ATTENTION!” whenever a visitor enters the gallery.

For those too young to recall the Vietnam War, the Hmong, an ethnic group indigenous to Laos, were backed by the CIA and the U. S. government to fight the North Vietnamese in Laos’ treacherous landscape. This heroic military strategy on the part of the Hmong warriors is known as The Secret War. Their most famous veteran was the late General Vang Pao, who fled Laos in May 1975 and eventually immigrated to the United States and became revered as a Hmong cultural leader.

The artist first met the Vietnam War veterans at a funeral for a Hmong elder who had fought in Laos. Many men attended in uniform. Curious, Her began to befriend these men and learned that neither our country nor the U.S. military recognizes them as veterans. In spite of their service, they do not receive benefits or health insurance, and cannot be buried in Arlington Cemetery. Consequently, they purchase or make the uniforms and medals they wear to acknowledge their history.

In return for the opportunity to photograph them, Her gave each veteran a portrait of his choice. Appropriating visual cues from presidential and military portraits, Her has given these men a public face and a measure of dignity in a formal and familiar official portrait genre. The surface of the prints is lush, even luminous. Almost beatific. “By looking up at these men, I wanted to inject a reverence into the viewing experience, and an idea of recognition that these men have yet to receive,” explained Her.

As a cultural intervention “ATTENTION!” is a poetic strike to correct this neglect. Although the veterans’ status goes unacknowledged by the military – and the world – Her’s portraits shed a fierce but timely light on the situation. We are prompted to consider our own identity and place in the world. How would foreign cultures and regimes recognize our past allegiance to them? Not always well, as recent events in Iraq and Syria have proven.

These portraits of Vietnam War veterans contain a personal meaning for Her, who was born in Laos in 1980. Her father fought the communist Vietnamese and Laotian military, who were massacring the Hmong after the Americans exited, before he fled with his family to Thailand in 1983, where they lived in camps. They arrived in Saint Paul in 1986. “ATTENTION!” is an extension of Her’s history, a chapter that she witnessed as a small child with only partial understanding, but one that is embedded in and has shaped her life. 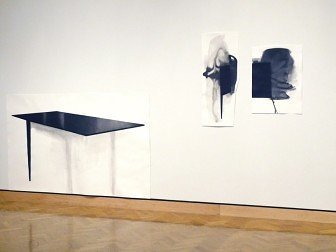 The Table’s Body by Shana Kaplow

Shana Kaplow’s Near and Far is a fluid, multi-component installation that investigates the way our intimate belongings are connected to much larger forces across geographies and cultures. What have been realized as ink on paper paintings, videos and a table balancing on two legs, were formerly ideas that percolated within Kaplow during her two visits to China where she adopted her daughter. While there, she began to realize how our lives in the United States are connected to the lives of people in “faraway places” whether it is through the jeans that we wear or the smart phones that we covet.

Near and Far immediately conveys Kaplow’s exquisite command of the large gallery and how she expertly weaves together the project’s many ink on paper paintings, two video projects, and a table balanced on two legs. It also reveals Kaplow’s explicit understanding of the fugitive medium of ink. Using images of tables and chairs as a vehicle on which to hang her ideas of “what is not seen but sensed,” the chair functions as a stand-in for the human body, or us.

Exact meaning of Near and Far may elude the viewer, but no matter. Is it necessary that we know that her parents on their honeymoon in Scandinavia bought the dining room table depicted in The Table’s Body? Or that the small wood stools are antique Chinese worker stools? Or that the video Color My World, the only element of color in the project, was shot in part at IKEA and is a subtle critique on the cult “of new shiny IKEA-like things”? Endless Stack, an expressive tower of modernist chairs rendered in ink could be simply a reminder of chairs manufactured in faraway places, or it could also be a metaphor for a stack of individuals and how they are linked together. Do we need to know? Not really. Near and Far is an associative project, one that allows the viewer to wander and contemplate, and ultimately construct his or her own narrative. 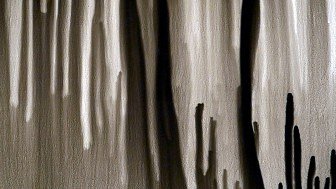 Most mesmerizing and most opaque is the digital video Gravity, a one-hour loop capturing a wide swath of ink streaming down a sheet of paper, a sequence that visually evolves from white to grey to black. Cinematic-like, Gravity’s projection onto the surface of the tilted table generously allowing the visitor to simply stand and gaze.

“ATTENTION!” and Near and Far are concerned with cross-cultural and cross continental relationships, and the fact that we are often unaware of the other. In the end, Her and Kaplow’s installations combine eloquently to form a smart, aesthetically stunning show that demonstrates the beauty and rigor of good art making, while guiding us along with a deeper, intellectual purpose and reward.