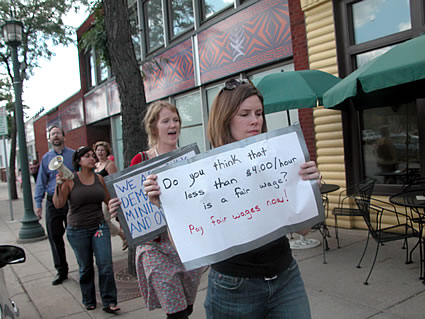 Opponents of wage theft participate in a demonstration outside the restaurant. Photo by Michael Moore.

Francisco Dominguez Sanchez estimates he earned about $4 an hour – well below the minimum wage – while washing dishes and preparing food at a Minneapolis restaurant. And he’s probably not alone.

Members of the Workers Interfaith Network joined Dominguez Sanchez for a protest recently outside Peninsula Malaysian Cuisine on the “Eat Street” section of Nicollet Avenue. They carried signs and chanted, “What do we want? Fair wages! When do we want it? Now!” in both English and Spanish.

“They weren’t paying the fair wages that we’re owed and we demand justice,” Dominguez Sanchez explained. “This is happening in lots of other places and we want to make sure it stops.”

In April 2009, he and another employee, Raymundo Espinosa Moreno, together with WIN, filed complaints with the U.S. Department of Labor, alleging that the company did not pay them federal minimum wage and overtime pay. According to the complaint, workers earned about $750 twice per month while working about 140 hours every two weeks, which would come to about $4 an hour, well below the federal minimum wage of $6.55 at the time.

Brian Payne, an organizer with WIN, said the workers are still waiting for action on their complaint. In the meantime, he said, workers and WIN have made several attempts to meet with the company, without success.

WIN is urging people to call Peninsula Malaysian Cuisine, 612-871-8282, to ask them to meet with the workers and WIN and resolve the situation.

People such as Dominguez Sanchez are part of a “national epidemic” of wage theft, according to Interfaith Worker Justice, a national network of people of faith that has been working on this issue.

“It is a mistake to think that wage theft only affects immigrants.,” IWJ Executive Director Kim Bobo, who recently wrote a book on the subject, said in a recent interview with the AFL-CIO.

“For example, a certified nurses assistant, most of whom are native born, will work through her lunch hour and not get overtime, not get paid for it. And because of the way shifts cross, she’ll stay for an extra half hour to make sure the next CNA knows what’s going on. She’s just worked an extra hour and doesn’t get paid for it. That’s wage theft.

“You talk to any young person who’s worked in the restaurant industry, in recreation. They all talk about having tips stolen, working hours they’re not paid for or being clocked out long before they stop working. Wage theft is all around us.”

Last year, the U.S. Department of Labor collected $57.5 million in back wages for 77,000 workers in industries such as agriculture and garment making. The year before, it collected $52.7 million.

Affiliates of Interfaith Worker Justice have engaged in campaigns to obtain restitution for exploited workers. Through the Workers’ Center at WIN, Minnesota workers have organized to recover more than $300,000 in unpaid wages over the past two years.

The organization said it “has seen a significant increase in cases of wage theft since the economic downturn.”