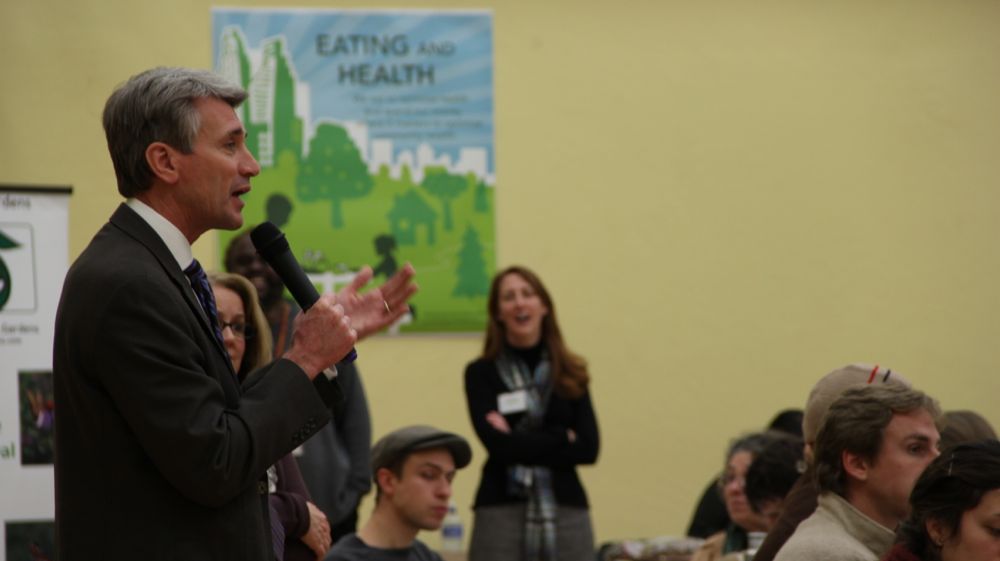 “This is a movement!” said an elated Beth Dooley, a chef, food writer and member of the Homegrown Minneapolis Food Council, as she addressed a gymnasium of people at the December 5 urban agriculture open house at the East Phillips Park Cultural and Community Center.

Full disclosure: I attended the open house both as a journalist and as a new volunteer to the Homegrown Minneapolis Food Council, the city initiative sponsoring the event.

Attendees had the opportunity to peruse the dozen or so booths set up by local food activist organizations and enjoy a light dinner provided by Birchwood Café and Sister’s Camelot before the program started.

During this time, Mayor Rybak said, “We knew that if we laid out a vision of where we want it to go, but mostly let the community tell us where it should go, we could do magic. This took a lot of pushing from inside city hall for awhile, and I’m going to push it as hard as I can, but the bottom line is there is enough momentum- that nothing is going to stop this. So I think it’s great, it really warms my heart.”

During the formal program, City council member Cam Gordon and his aide Robin Garwood were honored as 2012 Homegrown Minneapolis heroes for their efforts in city hall. Both Mayor Rybak and his wife, Megan O’Hara, a leader in founding the Homegrown initiative, spoke. The keynote for the program was a conversation between Eric Larsen of Stone’s Throw Urban Farm and Jim Bovino of California Street Farm.

Homegrown Minneapolis coordinator Jane Shey offered two reasons why urban agriculture was important to the vitality of a city: “Obviously you’re producing food within the community, food that’s fresh, and in many cases more healthy. The other thing about urban agriculture is that the neighbors around the garden connect with it. So they see their food being produced, there is a connection between that farmer and that city lot and the people around them. In some ways the community interaction that occurs with urban agriculture maybe just as valuable as the food that they’re producing.”

“It’s important for cities to be able to sustain their own populations when it comes to food and not rely on huge amounts of gas and natural resources being wasted just to bring unnecessary goods or things we don’t really need that are luxuries to us,” said Deeq Abdi who works with the Hiawatha Care project doing outreach in the Somali community.

Larsen sees access to land as urban farmers’ biggest obstacle, something they’re hoping the park board can help with.

As for Homegrown’s plans in 2013, Shey said, “We’ll be looking more at how we support our urban farmers. What resources do they need, how can we get more information to them, city regulations. A lot of the ideas are very innovative but they don’t fit the neat box of what we used to do and so there is going to be some massaging that needs to go on.”

Homegrown Minneapolis was started in December 2008. The food council is made up of 21 people, some chefs, city council members, food writers, city health inspectors and urban farmers, such as Eric Larsen of Stone’s Throw Urban Farm.