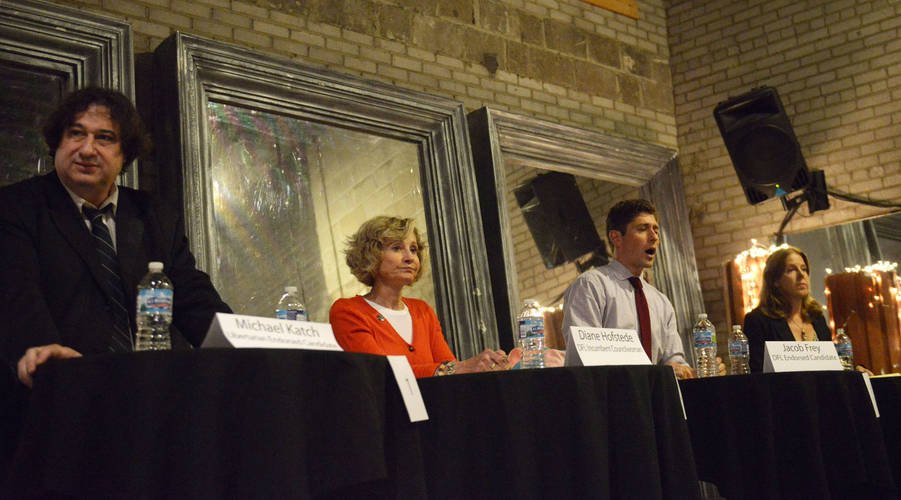 The Northeast Minne­apolis Arts District and the League of Women Voters in­vited four candidates vying for a council seat in Novem­ber to debate city develop­ment and issues facing local artists.

Candidates Diane Hof­stede, Jacob Frey, Kris­tina Gronquist and Michael Katch are facing off to rep­resent Ward 3, which in­cludes parts of the Univer­sity of Minnesota, Marcy- Holmes and Dinkytown.

Hofstede, the Demo­cratic-Farmer-Labor incum­bent, said she supports development with aesthetic appeal, citing Kelly Doran, a developer who’s claimed to have invested $150 mil­lion in luxury apartment complexes in the University district.

This was a change from last month, when Hofstede proposed a rare morato­rium on all development in Dinkytown. The six-month moratorium would have delayed a new Doran proj­ect planned for the heart of Dinkytown, but it failed.

Green Party candidate Gronquist said it’s impor­tant to step back and look at all development with a “critical eye.”

Gronquist, a University alumna, previously told the Minnesota Daily that too much development could hurt Dinkytown’s traditional culture.

“I understand there is a need for density and safe housing for students, but the overbuilding is what concerns me,” she said Tuesday.

Frey said it should be easier for artists to display their work in Minneapolis without being stopped by excessive city ordinances.

“We need to enable artists to practice their trade,” Frey said.

Hofstede suggested the neighborhood increase its number of “pop-up” galler­ies where artists can dis­play and sell their work in shops and restaurants.

She said she’s promot­ed pop-up galleries and restaurants during her time as a councilwoman, adding that she hopes to see more of them in the future. To promote artists and events in the district, Gronquist said the city should increase market­ing and public relations efforts.

Katch said it’s the art­ist’s job to promote his or her work, not the city’s. He suggested individual artists and artist groups partner with the city’s ho­tel industry to promote events in the district.

“We have to take care of [artists] much like any entrepreneur,” Katch said. “But … they’re not en­titled to special privilege.”

Frey rebutted Katch, saying that although the city government cannot create culture, it can help fund it.

Katch disagreed, say­ing subsidized housing should be reserved for those who need it most.

“Charity is important, but artists are not charity cases,” Katch said.