Shawn Postera was one of many biker-artists who came to Saturday's Bikers' Bazaar Craft Fair.

Shawn Postera pulled on a pair of stylish arm-warmers she’d sewn herself, hopped atop her beloved Surly Cross-Check and zoomed down the Midtown Greenway to show off her no-hands-needed riding skills.

Postera, 36, was taking a break from the hustle and bustle of Saturday’s first-ever Bikers’ Bazaar Craft Fair. Held in the Freewheel Bike Shop at the Midtown Bike Center, the event attracted close to 20 vendors, most of whom were women, and many, like Postera, who were there to sell bicycling-related gear.

“There’s a lot of talent here in the bike community, especially amongst the ladies,” said Postera, who’s organized casual, women-only commutes to bars, shops and parties for years. “They cannot only bike, but they do a lot of other things.”

The vendors offered a wide selection of reasonably priced treasures, from several brands of messenger bags, including Trash Bags and those made by Suzanne Janse-Vreeling, to Emily Floyd‘s earrings crafted from used inner tubes (below). 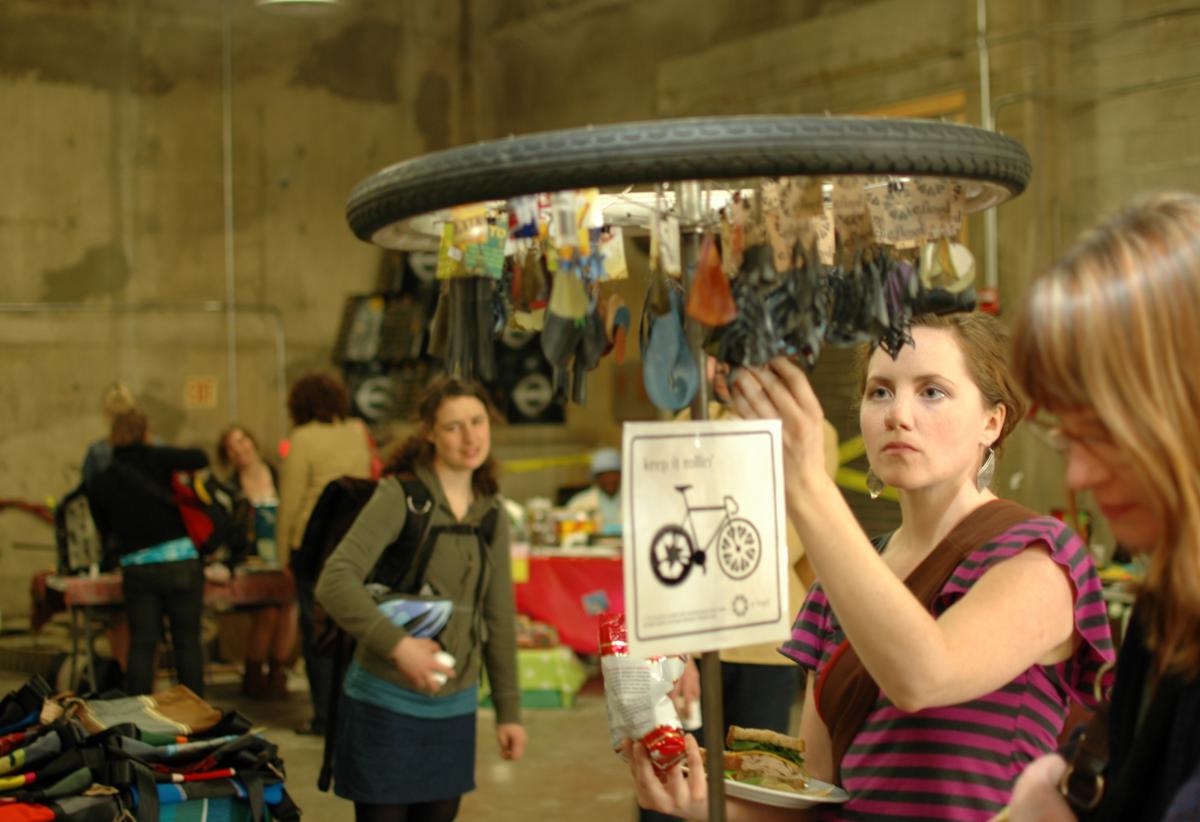 In addition to sharing their products, many of the artists and customers offered their thoughts on Bicycling magazine’s recent decision to name Minneapolis the country’s most biking-friendly city. This is the first time Minneapolis has received the honor, which has long been bestowed on Portland, Oregon.

To make their choice, Bicycling’s editors said they considered, among other factors, the “Bicycling and Walking in the United States 2010 Benchmarking Report” prepared by the Alliance for Bicycling and Walking. Minneapolis’s recent infrastructure improvements, like the bike lane changes on Hennepin and First avenues, played a role in Minneapolis’ getting first place this year, as did its having one of the highest ratios of bike shops to residents.

Earning the label came with a full-length feature story. Its author, Jonathan Chapman, visited Minneapolis during the dreary winter months and talked with some of the bike activism community’s longtime movers and shakers.

The majority of these voices, though, were male — so Saturday’s Bazaar offered a good opportunity to gauge a few of the city’s most devoted lady cyclists’ reactions to the news.

For artist Katrina Kubeczko, it marked the first day she’d heard of her city’s rise to the top.

“Awesome!” said Kubeczko, who was selling ruffled bike seat covers and handlebar pouches for holding cell phones, lip balm or keys. “We were number two for a while now, and now we’re number one? That’s amazing.”

Like many of her fellow artists, Kubeczko doesn’t have a car, and so she depends on her “feet, bike or bus” to get around town. For her, bicycling is one of the easiest and cheapest ways to commute.

As a former West Coast resident whose wife works at Quality Bicycle Products, a Bloomington-based wholesaler, hat maker Holly Magner was already well-acquainted with the news.

“I’m from Portland, so I probably got five calls the day that came out,” she said.

But the tough winter riding conditions tend to keep many off their bikes during the coldest months (a point bitterly noted, Magner said, by her displaced-feeling Portland friends).

Corissa Wikan, an employee of the Midtown Freewheel, co-organized the Bikers’ Bazaar with her friend Corin Abert. Wikan said she wasn’t surprised the Bicycling piece skewed more toward the male point of view, as much of the local bike shop scene — from owners to workers to customers — is still fairly male-dominated.

Wikan (below left, with Abert to her right) said she wanted Saturday’s event to reach out to a wider audience and turn people onto the Midtown Bike Center’s charms. 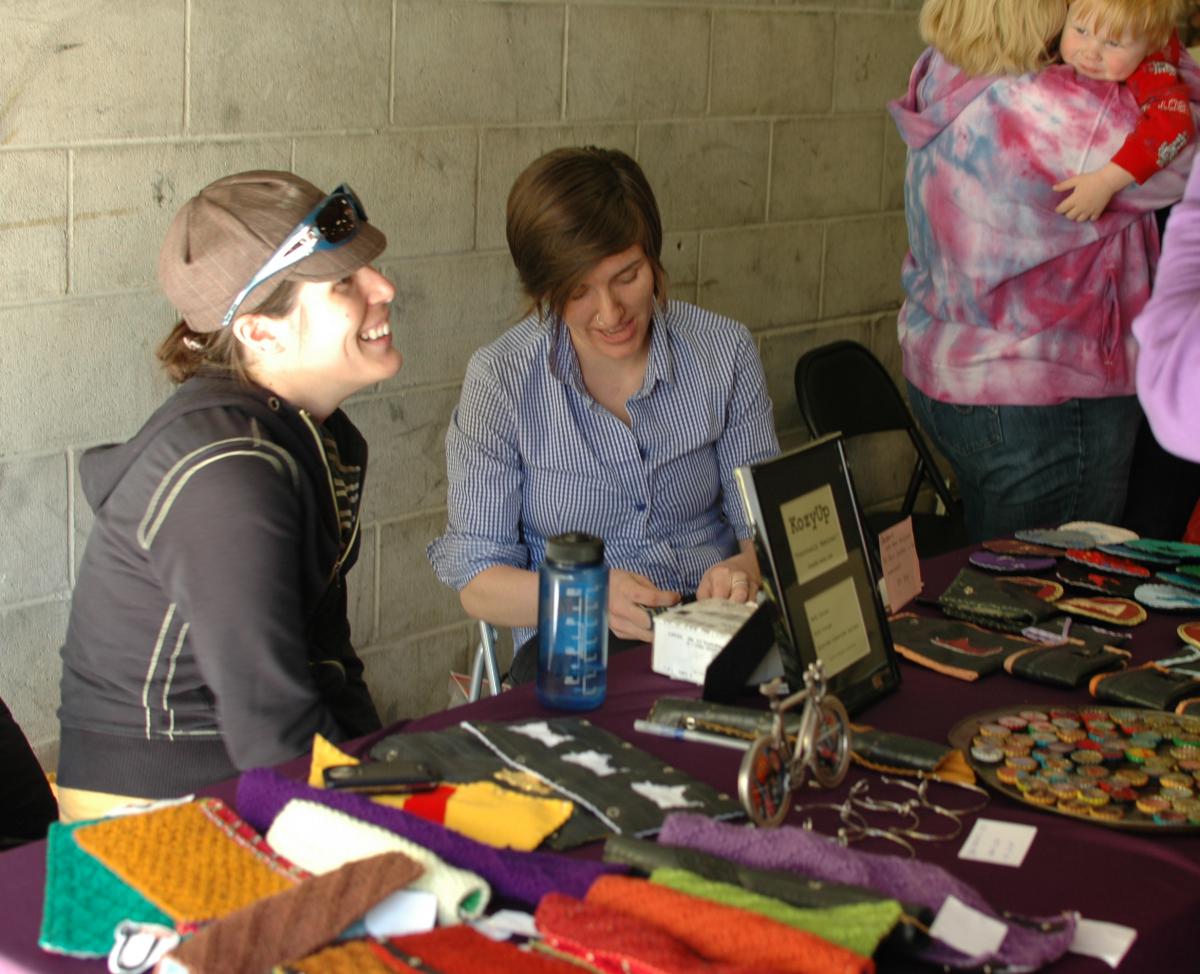 “I just wanted (people) to come out and see what it’s the middle of their community,” she said.

“I’m just an average biker, someone who doesn’t wear spandex or ride a fancy bike,” she added. “I just commute to work.”

It’s lower-key commuters like herself, she said, who could benefit from using the Midtown Bike Center’s amenities, from its shop to its showers, which are available for both people and their bikes.

Graham Olson was one of the few male artists displaying his creations, which are simple spoke bracelets that bespeak the wearers’ cyling passion. He’d sold enough of them that afternoon buy a wallet from his tablemate, artist Abert (below), who creates billfolds and coasters from used inner tubes. 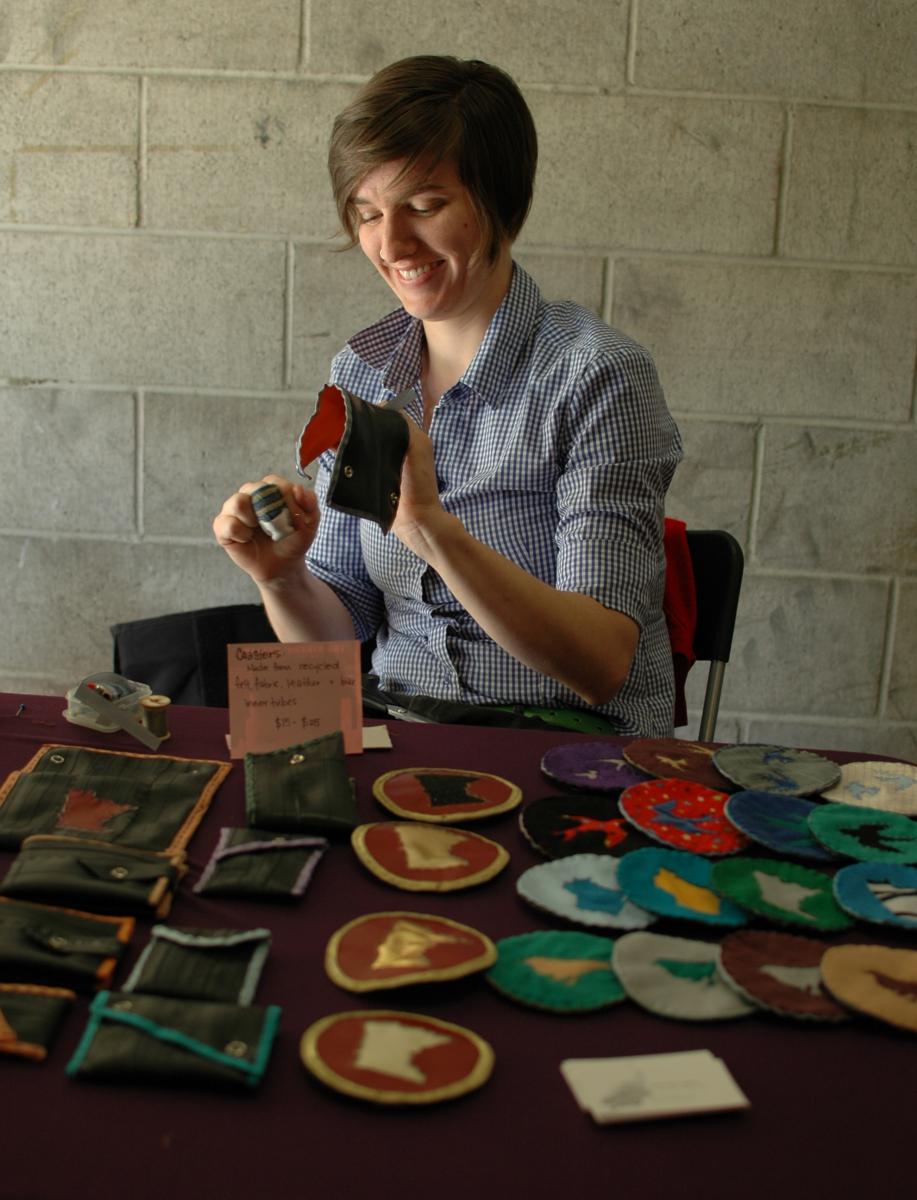 Olson was overjoyed to learn his home-base had hit number one.

More so than many others who spoke Saturday to The Planet, 26-year-old commuters Alicia Dvorak and Rachel Speck grappled with the assumptions behind the Bicycling designation.

Dvorak works as a mechanic at the nonprofit Sibley Bike Depot in St. Paul, and she organizes a weekly “open shop” night for women and transgender folks.

While Dvorak said getting the number one designation is great, she’s also taking the news “with a grain of salt.” That’s because she believes many of Bicycling‘s stories aim to reach a certain demographic — white male road bikers — and that’s not the more diverse face of city cycling she sees happening here. Below, some of the cyclists who came out Wednesday (including Speck, at far left in red, and Dvorak, to her right in green) pause to enjoy a cute baby held by Abert. 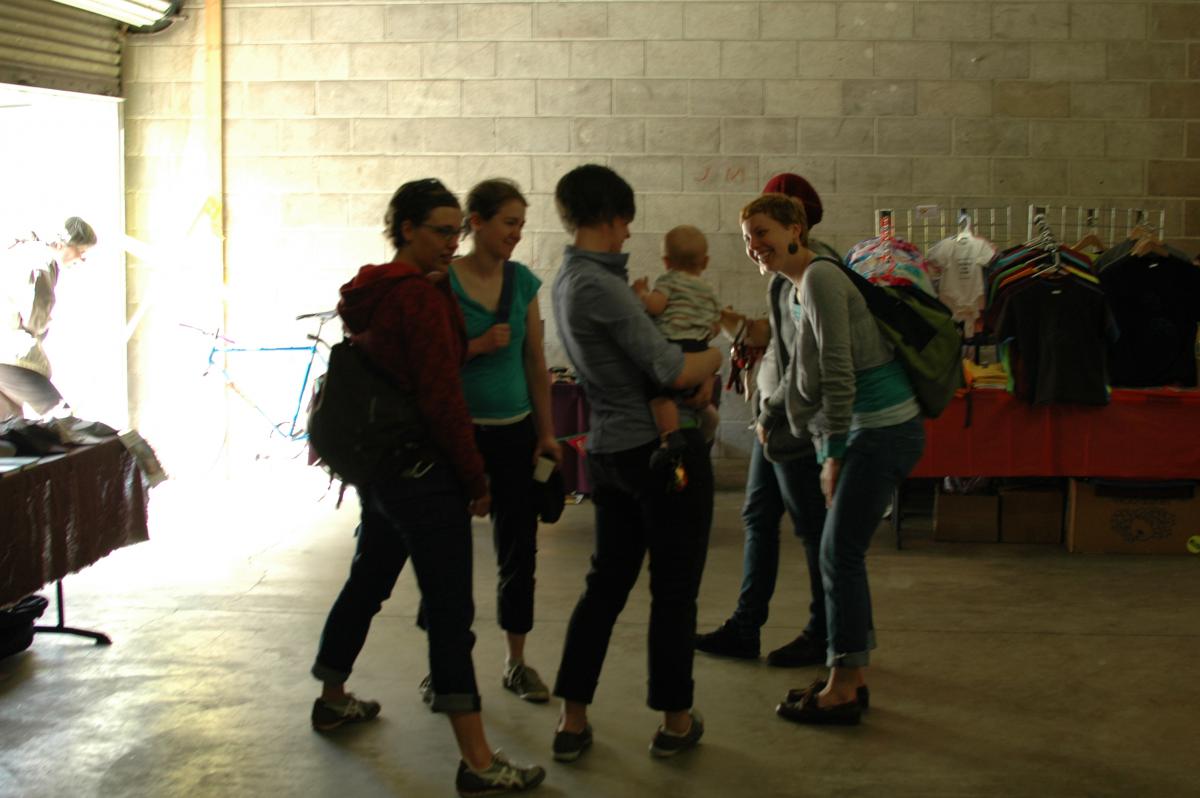 Speck shared Dvorak’s skepticism, citing how the article focused on a relatively homogeneous pot of people (white male bike activists and fixed-gear fanatics). It painted a too-narrow concept of bike culture, she said.

Both women acknowledged that the Twin Cities, which have received millions of federal dollars through the Non-Motorized Transportation Pilot Program (NTP), have been working to improve their bike infrastructure. But, they added, when it comes to making biking seem like a safe and attractive transportation alternative for women, low-income people and non-English speaking folks, there’s still a lot of work to be done.

“It can be really empowering for people to realize,” Speck added, “that they can move themselves places.”

“I’m hoping it will be an impetus for the government to say, ‘now that we’ve got national recognition, let’s do all the things we promised to do and do them well,'” Fulner said.

For their part, the grassroots coalition has led volunteer efforts, such as nightly group patrols, to make travel along the submerged Greenway more safe. More recently, they started the Heads Up, Buddy Up program, so people won’t have to ride alone on the trail after dark, and Women on Wednesdays, a weekly group ride that Fulner hopes will get more women interested in using and protecting the commuting resource.

Magner, whose Grovecraft caps are sported by male and female bikers across the city, agreed that more needs to be done to get women out on the road. Too many bike shops, she said, still assume that women don’t know what they’re doing. Having an upleasant shopping experience can add to women’s wariness about taking on the biking habit, she said.

Despite such systemic challenges, Magner said Saturday’s first-ever Bazaar marked a step in the right direction.

“We’re showing that women are part of the bicycling community in a functional sort of way,” Magner said. “We’re smart, we know what cyclists want and we’ve got it going on.” 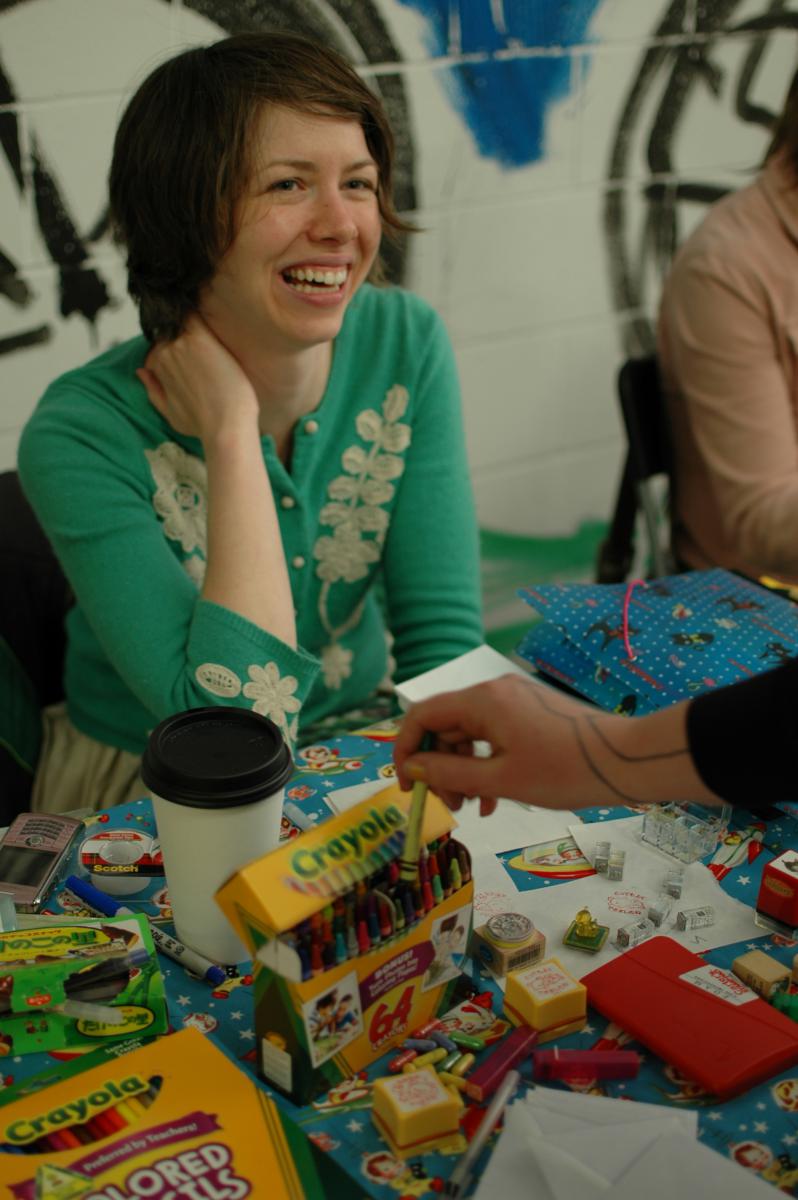 Above, artist Erin McKee, who rides a vintage yellow Schwinn cycle to her several jobs, offered Bazaar-goers a non-biking treat: For $3, they could make an “epistolary time capsule” — which is a letter to themselves, their partner or some other special person that McKee will send out next April 17.