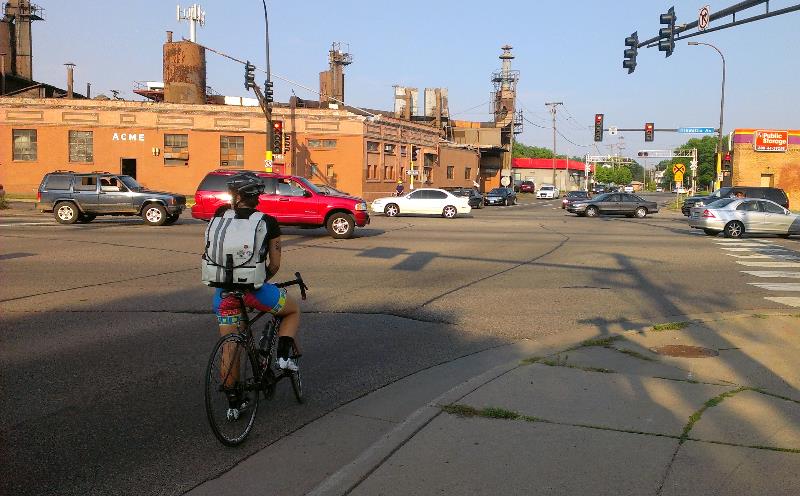 East 32nd Street is a highly used bicycle route connecting the Corcoran and Longfellow neighborhoods. “I use it every day to get to the (Midtown) Greenway,” states bike commuter Megan Barr. “A lot of people use (this crossing) as an alternative to Lake Street.”

A substantial and growing number of students at South High School are also among the cyclists who use this bike route everyday. Yet, the current condition of the crossing of 32nd Street and Hiawatha Avenue not only discourages bike use, but is also a dangerous intersection.

Becca Krasky, a South High student leader, says “These improvements are not just something we think would be nice, but rather, things that we need because it is scary biking to school.”

In December 2012, Corcoran Neighborhood Organization specifically requested that the County and the City to include additional measures at the intersection to improve cyclist safety as well as increase awareness that the roadway is shared by cars, bicycles and pedestrians. The following spring 125 high school students signed a petition requesting the same safety improvements.

Government staff seem to have listened. Hennepin County, the City of Minneapolis and Minnesota Department of Transportation have all agreed to fund crossing improvements at 32nd Street & Hiawatha Ave. 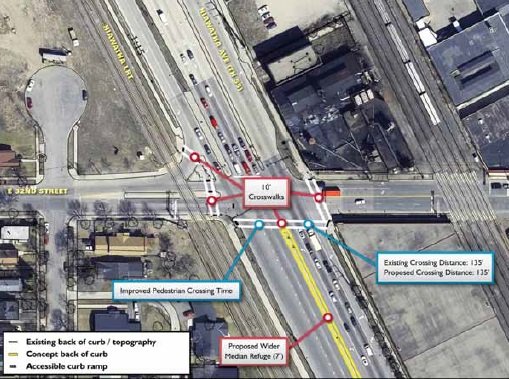 “These intersection improvements will make it easier and safer for walkers and bikers to cross Hiawatha and help bridge that physical barrier between the neighborhoods,” says Robb Luckow, project manager for Hennepin County’s Minnehaha-Hiawatha Community Works, which has made improving mobility for all corridor users a project priority.

However, two key improvements seem to be missing from the current improvement plans. Not pavement markings are designed for the westbound lane east Hiawatha. This is concerning because of how narrow that section of the road is and rolling stops of vehicles in the right-hand turn lane onto Hiawatha.

Corcoran resident Jullonne Glad also expressed, “I’m wondering if it would be possible to get some sort of signage to clarify how cyclists should proceed through the intersection?”

Glad conveys “Sharrows are helpful, but sometimes (these) give the impression that cyclists need to remain over in the gutter pan which can be hazardous due to debris or snow.”

For more information, to share your thoughts or to get involved in bike route improvements please contact Ross Joy.