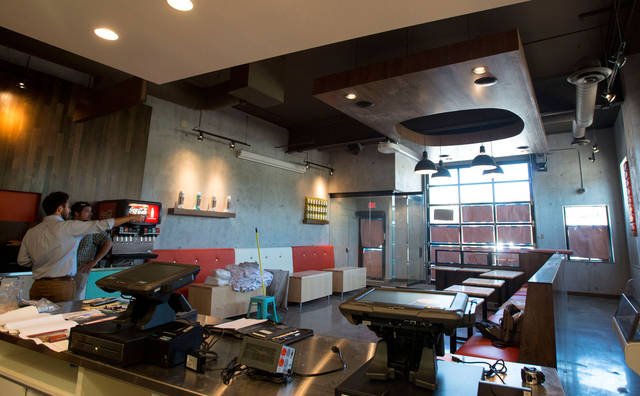 My Burger owner John Abdo gives directions to a worker on Tuesday, July 16, 2013, in Stadium Village. The restaurant is currently under construction and will open later this month. (Photo by Amanda Snyder)

As new apartments and businesses sprout up in Stadium Village, the University of Minnesota-adjacent neighborhood could become a new locale for student nightlife.

My Burger, a local burger and beer chain, will replace the old Oak Street Textbooks site this month. The restaurant will join the new wave of business in Stadium Village as the area experiences more student-focused development.

When looking to grow his business, My Burger co-owner John Abdo, said Stadium Village seemed like the perfect spot for a new location.

“We want to become a part of the neighborhood,” he said.

The Oak Street location will cater to University students — “Study Hall” will be painted on one wall, while another will display the walking times to campus buildings.

The sit-down restaurant is awaiting city approval for late-night and liquor licenses, which would allow them to sell wine and beer until 2 a.m.

Although My Burger wants to serve the late-night crowd, Abdo said they’re not looking to be a “party bar.”

My Burger will follow suit with other Stadium Village restaurants, which typically cater to a calmer, day-time crowd. However, some area businesses are hoping new developments and the light rail will bring a more vibrant night life.

Stub and Herb’s Restaurant and Bar manager Josh Zavadil said he’s seen a surge of more young people in the neighborhood and hopes the lightrail will bring more late-night customers.

Area developers are hoping for the same attraction.

CPM will start construction July 26 on a 98-unit apartment complex where Sally’s Saloon and Eatery now stands. CPM will also start construction down the street on the 333-unit WaHu student housing development by the end of the year.

Dinkytown restaurants and stores may find a rival in Stadium Village in the future, Oberpriller said.

“This side of campus is more appealing as more apartments come in,” he said.

“It will be interesting to see what happens in the next year,” he said.

“The area’s definitely changed,” Zavadil said. “But I don’t see it becoming the new Dinkytown.”

“They have some great places over there,” Johnson said. “We’ve both always been unique in our own way.”

“People will still make the trek,” he said.