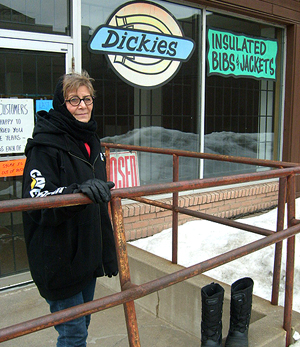 Former customer Elaine Klaassen stands in front of the empty store wearing her gloves, Caterpillar hooded sweatshirt and boots from Kaplan’s. She feels, like many loyal fans in the Twin Cities area, “Kaplan’s was my kind of store.”

Kaplan Brothers store, founded in 1926 on the corner of Franklin and Bloomington, and relocated to Lake Street and 15th in 1988 after a terrible fire, closed for good on Feb. 16, 2013, at 5 o’clock in the afternoon.

Some musicians introduced me to Kaplan’s almost immediately upon my arrival in Minneapolis, in 1981. I bought my first pair of winter boots there, which finally wore out 16 years later. I had paid $16 for them so I thought that was a pretty good deal. For years they showed not one sign of wear.

I went to Kaplan’s at the first snow this winter to get new boots (now they cost $40, which, if I can rely on precedent, my kids will inherit …) and while shopping thought I’d get some socks, too, those wool Army socks I’ve worn every winter since 1981. They were out. I went back a few weeks later and learned that the company didn’t make them anymore and furthermore had gone out of business. 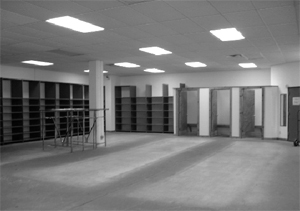 Then a guy named Terry Hokanson sent an email to Southside Pride saying that Kaplan’s was going out of business. He had posted the news on facebook and had received an immediate outpouring of dismay and sadness. He himself had this to say: “As the son of blue collar parents, living in a hype-driven commercial world, I always felt like Kaplan’s was the Real McCoy, a store for my kind of people—fun-loving, plain-talking, hard-working. You didn’t go there for status brands and frills; you went there for durable clothes that would get the job done and last more than one season. And you paid prices that obviously weren’t covering a bloated advertising budget. Kaplan’s didn’t bother with hype. They just walked the walk.”

Founded in 1926 by Joseph and Jacob Kaplan, the store stayed in the hands of the Kaplan family for 60 years. An outside manager was hired in 1955, when Joseph died. Over the years, his brother Jacob, who died in 1978, and the descendants of both brothers kept the store going. They were all owners, but some worked in the store and some didn’t.

The final decision was to sell the inventory and the name. Four people who had worked in the store bought the business as well as a new property at the corner of Lake Street and 15th Avenue South.

They lost business for a couple of years when Lake Street was closed for repaving. That was a blow.

In December of 2009, a pipe burst and the basement flooded all the way up to 3 feet deep on the first floor. A huge amount of inventory was lost; the sidewalk in front, with the forest wreath patterns stamped into the tinted cement, caved in and had to be replaced; the store was closed for nearly four months, and even with insurance, it was pretty impossible to dig out.

Another factor is that a number of Kaplan’s supplier companies have disappeared, like Burnsville Hosiery, which made the fabulous Army socks; or the company that made the popular thin white cotton socks with gold threads in the toes (Lisle), in business over 100 years, that went belly-up when cotton prices went up; or the manufacturer of thin socks in individual sizes, from whom Kaplan’s received a letter a few years ago: “We haven’t made money since 1991, so we are closing.”

Some of their biggest suppliers forced them to raise prices, which also hurt business.

Another problem: There hadn’t been as great a demand for warm outdoor clothing because there had been no winters for a long time. The manager, Tim Grant, said, “It’s been at least 10 years.”

Also, according to Grant, the demand for work clothes has decreased, because, there is no work and working people aren’t working.