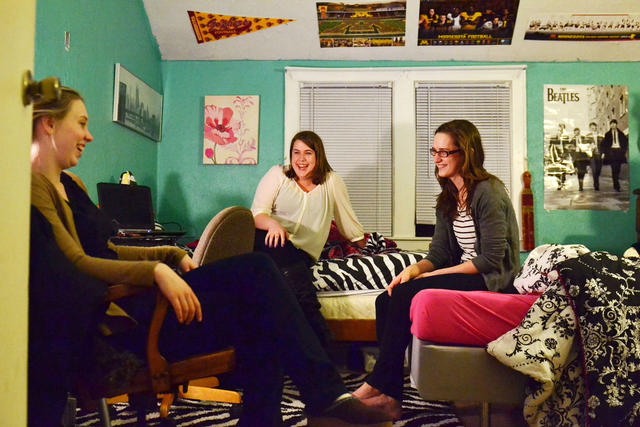 Roommates Maria Finsness, left, Maddie Hansen, center, and Emma Reese relax in one of their rooms Sunday, March 10, 2013, in their Dinkytown home. The three roommates share the home with 11 other people and said they consider rent very affordable. (Photo by Amanda Snyder)

Minneapolis is the place to live, according to the city’s most recent resident survey.

Nine out of 10 survey respondents rated living in the city as “good” or “very good.”

While respondents reported satisfaction with the livability of the city, they also revealed their increased concern for housing — especially in the University District.

On campus, the affordable housing is there, said Tom Streitz, director of housing development for the city — the perception is just that it’s been there for a long time with little new development.

At the same time, the district was among the top four for residents feeling their housing costs were affordable.

For psychology sophomore Emma Reese and many other University of Minnesota students, the concern for finding affordable housing is very real.

Reese lives with 13 other students in a house and pays $439 a month for rent.

She said she never considered new upscale apartment complexes in her search for a place to live because of the high rent rates.

“I’m paying for school myself,” she said, “so the cheaper the better.”

Students, like Reese, often deal with expensive rent by pooling resources or taking out loans, according to Ryan Allen, University assisant professor of community and economic development.

Steps like this, he said, explain why almost 90 percent of the district reported that their housing costs were affordable.

The city considers paying less than a third of one’s total income on housing to be affordable housing, he said, so students don’t realize that sometimes “affordable” housing on campus isn’t universally seen that way.

And because students are keen to live close to campus and willing to turn to their parents for financial help, Allen said, they find ways to pay their rent.

“Given this inelastic demand, students are going to live close to the University come hell or high water,” he said. “So they’re willing to pay a little bit more.”

Streitz said projects around campus detract from the fact that there’s plenty of affordable housing on campus.

“People tend to focus on the fact that the new developments tend to be higher-end,” he said. “But there is still a lot of affordable housing in the U District.”

The perception that recent projects are expensive is accurate, but the idea that there isn’t enough affordable housing to offset it is not, said Kelly Doran, the prolific developer behind Sydney Hall and the upcoming Knoll apartments.

New development comes at a high price, he said, and high rent is the only way to finance it.

Because of the cost, it’s not financially viable to invest in new construction and then charge mid-range rent, he said.

“That’s a terribly inefficient way to develop affordable student housing,” he said. “You can’t build a $200,000 apartment and charge less rent just because someone needs to have it affordable.”

Instead, Doran said, investing in remodeling or improving existing affordable housing is the best solution.

Through discussions like these, the city can use the resident survey as a scorecard for its work, said Ahmed Muhumud, a city outreach manager.

Streitz said he was pleased with the results of the survey, both for the city as a whole and for his department.

“It’s heartening to see more people describe affordable housing development as something important to them,” he said. 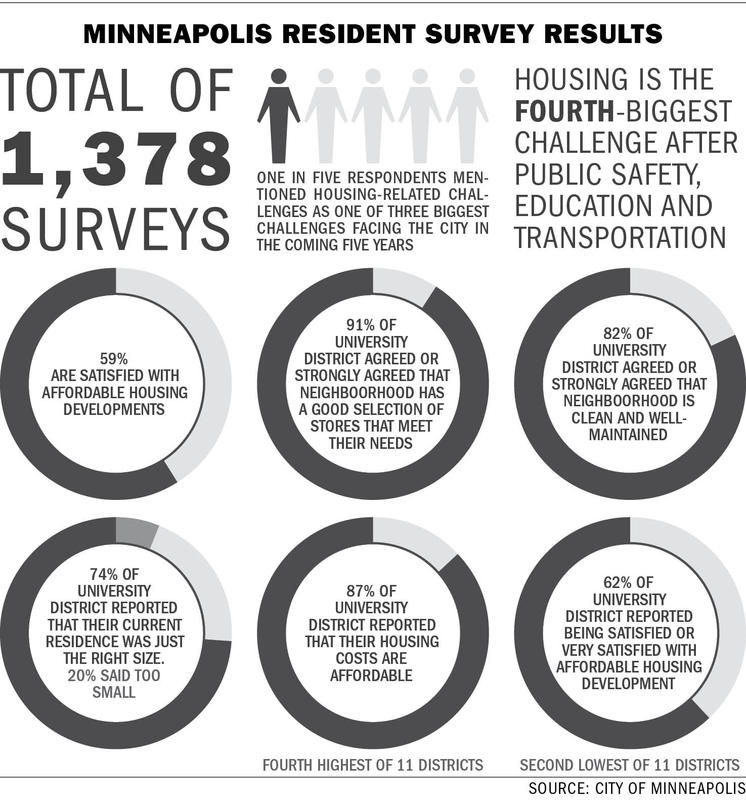