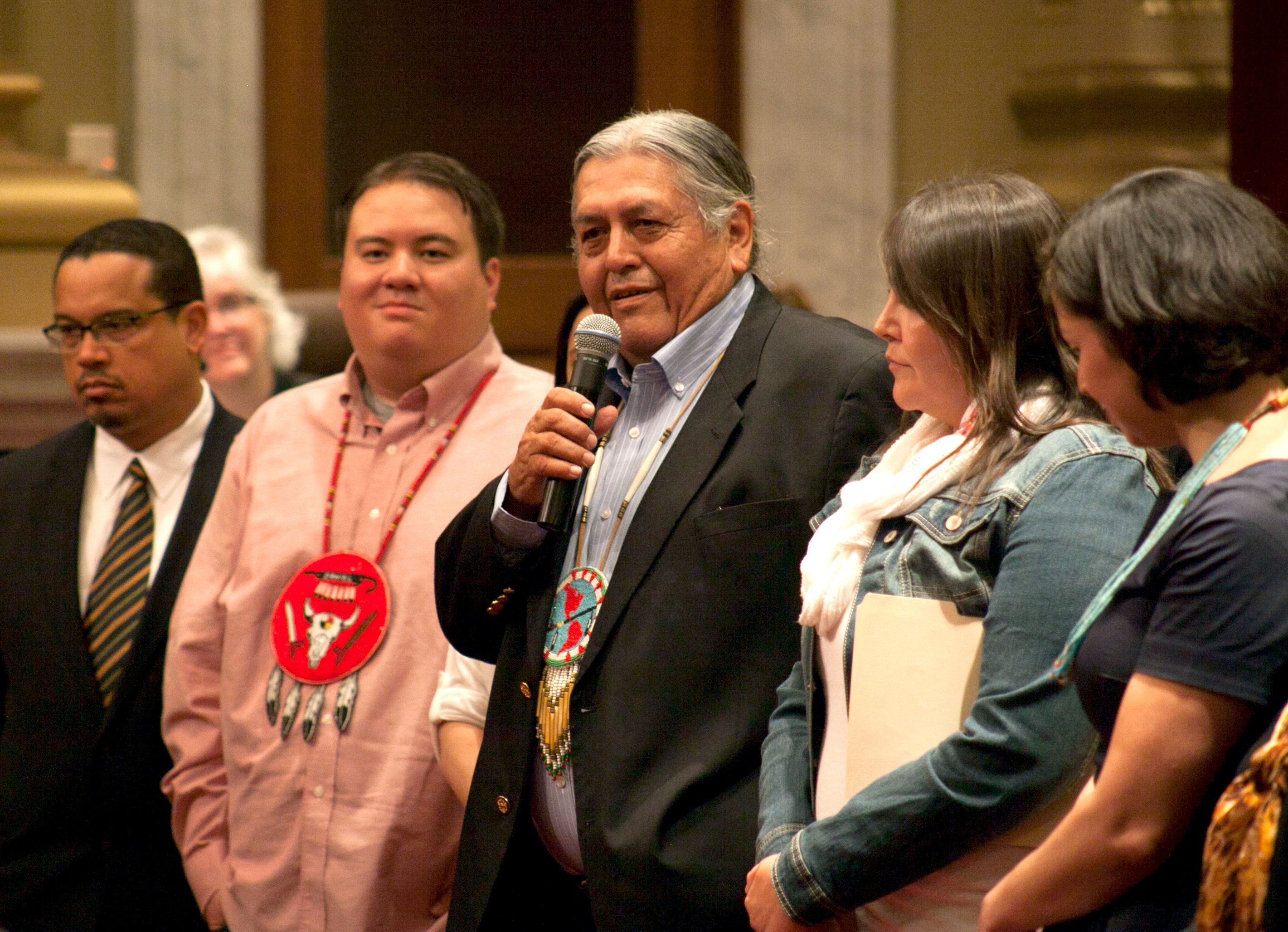 Marking a milestone in tribal relations, the Minneapolis City Council voted unanimously on April 25 to recognize Indigenous Peoples Day on the second Monday in October, effectively replacing Columbus Day on the civic calendar.

The gesture by the city government speaks to years of struggle for recognition and equity by members of the city’s Native American population. As one of the cities with a high Native population in the country and birthplace of the American Indian Movement, it hasn’t been until recently that city officials embraced its indigenous history. In 2012 on the sesquicentennial of the Dakota War, efforts began to understand the state’s history from a Native perspective.

To that end, momentum has been building in the community – focused through the Native American Community Development Institute – to address issues of equity and justice. The organization, led by Jay Bad Heart Bull (Oglala/Hunkpapa) and Daniel Yang (Anishinabe) utilized its political and human capital to build a dialogue with city leaders, beginning with last year’s mayoral election.

Then mayoral candidate Betsy Hodges committed to taking Native issues seriously at the city level during her campaign in the summer and fall of last year. Along with Council Rep. Alondra Cano (Ward 9) and policy aide Ashley Fairbanks (Anishinabe), the effort went into full force last month when the resolution to change the name of the holiday was drafted.

“I’m here to take a stand so my daughter Breanna and my son Nigozis are able to grow up in a city where they feel safe, respected and honored. Replacing Columbus Day with Indigenous Peoples Day in the city of Minneapolis would show my children that it’s never too late for healing and reconciliation to occur between communities and throughout Turtle Island,” Standing Cloud said.

Bad Heart Bull was quick to give credit for this generation’s position influencing policy. In an interview last month he said, “NACDI was the catalyst in working with the community, but it builds on decades of work from other organizations, groups and thousands of activists that have worked to push this … It’s the Bellecourts, the grandmas, the youth groups, Little Red Schoolhouse, Heart of the Earth. We’re just lucky stand on the shoulders of all of these great leaders, activists and advocates in our community. We feel like we would be doing a disservice if we didn’t try to push even further and build on top of that foundation that the laid for us young folk.”

On the morning of the vote, government officials and hundreds of community members gathered in City Hall to pay their respects not only to the efforts of those civic leaders to address the issue, but to the shared history that led to the day.

“We get to acknowledge that – not just history – but a living, breathing relationship, a living, breathing community that is at the heart of the city of Minneapolis. I want to thank the community for organizing, I want to thank the community for insisting on its own behalf that we are one Minneapolis, we are one city, that we are one people and we should acknowledge that – officially and formally – as a city,” Hodges said.

As the Congressional representative for Minnesota’s Fifth District, encompassing much of the city, Rep. Keith Ellison acknowledged the history and his admiration for Native issues.

“I remember standing at the docks of northern Minnesota and Wisconsin as Native fishermen were trying to just extend their right to hunt and fish per agreement and were being contested by hostile crowds,” he said. “The very foundation of the United States, the theoretical concept of it, offered to our nation by the Iroquois Confederacy, as we were told growing up, ‘Oh, this is from the Greeks.’ We weren’t told about the Iroquois Confederacy, but we learned about it. And now that we have established Indigenous Peoples Day, every child – whether that child is Native, or whether that child is not – will learn the truth about where America really, really comes from.”

In his speech to the city council, Means made note of the shift in attitude toward the Native community during his lifetime. “It’s kind of refreshing to come and be invited to this chamber because usually we have a drum outside, three or four-hundred people marching … and so this marks a great change in our relationship to be able to come to this legislative body with an idea that has come to fruition: the recognition of indigenous peoples.”

Touching on an identity widely known throughout tribal communities but generally unknown to mainstream America, Means expounded, “We too, as indigenous peoples, have a creation story to tell. We too have a language, a culture, a government that governs our people. This is the beginning of the recognition of those contributions to the United States and indeed here, to Minneapolis.”

Ellison briefly spoke about his experience in learning history from an outsider’s perspective. “This is so important because it’s difficult to imagine if you’re from a mainstream experience, how it feels to sit in a classroom and be told ‘Oh yeah, well you know, there was this darkness and then Columbus came and then there was light.’”

For her part, Standing Cloud, 35, described what it was like for someone of her generation to have grown up with the legend behind Columbus. “I remember feeling lied to and really deceived and then after working through it for awhile, it wears on you. It affects a kid’s self-esteem – everybody’s self-esteem – because you’re celebrating a man that murdered millions of your relatives and then, there’s a national holiday for him,” she said.

“It’s kind of confusing for indigenous children to work through that and resolve that because there’s no protocol and no institutions are going to help anybody reconcile that. So I guess that it’s a little challenging for young people trying to find their identity.”

In the summation of the complexity of identity in the state of Minnesota, Council President Barbara Johnson (Ward 4) wove a rich history of her own family’s ancestors as they watched history unfold in Minneapolis.

“One of my relatives who came from France was a man named Joseph Renville and he had a son, the son had a Lakota wife. Joseph was a fur trader, he had a post, he translated the Bible from English to Lakota and he has a remarkable history in this state. He married into Little Crow’s family,” she said.

“Joseph had a brother named Victor Renville and he was – in this brutal history – scalped by Ojibwe people. Victor’s son – Gabriel – was raised by Joseph. Gabriel was an integral part in the Dakota Conflict. He worked against his relatives, who were Little Crow’s family, and defended some of the settlers who were involved in the conflict. Gabriel went with a number of Renvilles to Fort Snelling and spent that very, very cold winter there and their names are reflected on a plaque there.”

Johnson continued, “I represent people that have Italian history and some are offended by this change, this recognition, but I think it’s about all of us moving forward and understanding the strength that we have because of all the different groups that have impacted this community long ago and today … I think on the second Monday of October, we’ll all be reminded about the challenges that we have, but also the joint successes that we have as a community.”

While the resolution is only binding on city government, communications and policy, it also encourages city businesses, organizations and public entities to recognize Indigenous Peoples Day. According to Bad Heart Bull, the next step is to approach the city of Saint Paul to consider a similar resolution with a long-term goal of doing the same at the state level.