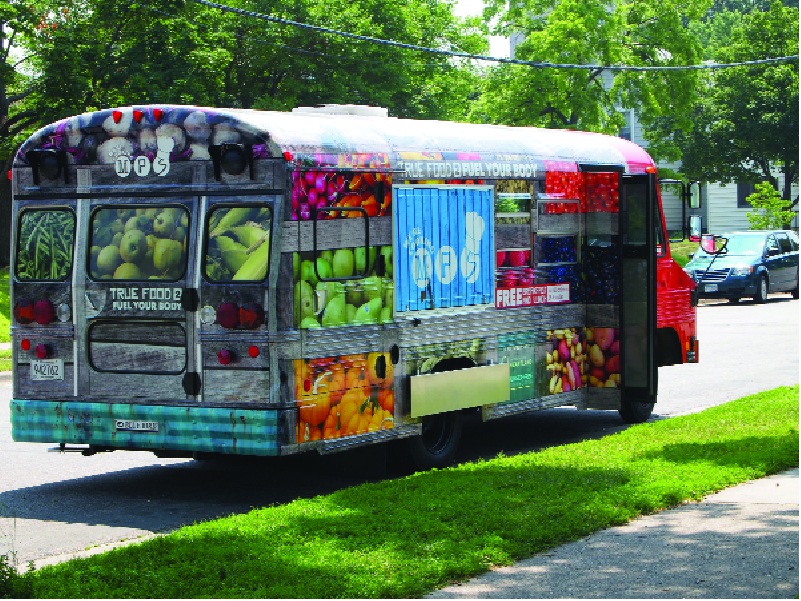 “My son ate broccoli and carrots for the first time, seeing his peers do it. And the ranch dressing helped,” said Andrea Worsfeld, picnicking at Jackson Square Park with her two year old son, his six week old sibling, and another mother and her children. They’d come for swimming, but stumbled upon the free meals for kids offered from the Minneapolis Public Schools food truck.

Elijah Dodds and Bobbi Varichak, who staff the food truck, said they served 54 lunches on Thursday, July 11. “The kids run to the truck when it comes,” Varichak said. “They are very thankful, they always say thank you.”

One girl was politely refused when she came back and asked for a lunch for her brother, “he’s on house arrest, he has one of those ankle things,” she said. The program covers all youth up to age 18, but the rule is they have to give the meal to the child and watch them eat, said Bertrand Weber, the school district’s nutrition director. He said the point is to nourish the kids and not let them be used to ferry free food for adults.

But, to encourage parents to bring their kids, there is also a $15 two-week pass that parents can purchase so that they can eat with their kids. It’s not sold on-site, but through the Nutrition Center.

Elizabeth Koski and her mom, Adelheid were there, too. “Since they switched to the food truck the lunches have been better,” Adelheid said. The food truck is new, and is serving four parks around the city.

Other parks receive lunches that are dealt out from coolers. Second Harvest Heartland is among the sponsors of the USDA Summer Food Service Program; to find nearby sites, go to the website 2harvest.org/summerfood.

The school food truck lunches may be served in plastic and assembled at a central location, but they’re part of an evolving school district mission to keep kids healthy, nourished with locally grown foods.

Jackson Park is just a baseball’s throw from Edison High School, one of the district’s high schools that started serving healthier lunches this past year. Coincidentally, Ashley Mueller, whom you may remember for her role in the Edison Green Campus launch, went on to work as the district’s farm to school coordinator. According to her former boss, Bertrand Weber, she just this past week moved to Manhattan, creating an opening for the position.

We caught up with Weber, Director of Culinary and Nutrition Services, before he headed off to a national conference on school food. Most American school districts prepare their own lunches; Minneapolis was and is different, as he describes the history:

“In the mid-1960s, only four elementary schools had lunch programs. All the others went home for lunch.” Implementing a lunch program to make sure kids were fed, in the 1970s they built the central kitchen as a distribution center for “pre-pack” foods purchased from processors.

“But the high schools, some of them had kitchens. In the late ’80s and ’90s, the format was fast food. There were branded stations,” contracts with fast food companies. “Schools followed society trends and one by one the kitchens were replaced” with basically re-heating stations.

Enter Weber in January 2012, about six months after the previous incumbent retired. A hospitality manager with a couple decades’ experience, Swiss-born and possessed of the accent, he shows the passion of a Jamie Oliver without the made for TV exaggeration. Printed reports describe Weber’s overhaul of the Hopkins school district lunches stemming from his outrage at what was offered his son, who has diabetes.

By the way, “we encourage parents to come eat lunch with their kids to see what we’re serving,” Weber said. The price, just $3.50 for an adult. Students pay $2.10, though most who eat school lunch are getting it free because of their family’s low income. North and Northeast have the highest participation, Weber said, and Southwest the lowest “where the perception is still that school lunch is processed.”

Weber’s first step in Minneapolis, before the 2012-2013 school year, was to renovate the serving lines at the high schools and a handful of elementary schools that had the right equipment (Edison , Henry and Hmong Academy are among them). They reintroduced foods cooked on site, or cooked at the Culinary and Nutrition Center at 812 Plymouth Ave. N. and assembled on site. “We can make the bulk pizza sauce and spaghetti sauce, real chicken, roast turkey, the stuff for burrito bars, the fruits and vegetables for the salad bars. It’s an improvement from the food perspective and the presentation perspective.”

Does the food cost more? No. In fact, the farm contracts and contracts with intermediaries such Ferndale Markets (for turkey) make the cost of raw ingredients less than the cost of processed food, Weber said. The labor is a little more. “Every other school in Minnesota cooks on site. St. Paul never went pre-pack. We actually buy some of their stuff.” St. Paul’s kitchens are set up so three to four people will serve 300 to 400 kids.

The advantage of Minneapolis’ central kitchen is producing high quality food in bulk, with consistency, and sending it out cold the day before. “Two cooks can make” what it would take 60 to make at scattered sites. The Culinary and Nutrition Center workers can make chilis, soups, sloppy joes, vegetable lo mein, fried rice and squash bake as well as the foods mentioned above.

“The cost is in the infrastructure. Once it is operational, it’s sustainable.” Weber said there are a few more schools whose cafeterias can be converted within his department’s budget, the rest will hinge on results of a larger feasibility study. He estimates that converting the central kitchen will cost $5-$6 million; to that, add the costs at the schools where some don’t have a kitchen or even a sink.

“It’s not about money, it’s about changing the food culture to benefit the kids,” Weber said. “Trying to get back to basics, true food.” The district started True Food Thursdays featuring scratch cooking, and had recipe tastings at schools to find out what healthy foods kids would like.

At the high school level “food waste has about disappeared, and at the elementary level, at the salad bar kids only take what they intend to eat so there is little waste there, too,” Weber said. The schools order online based on historical usage.

The change is not just in the cooking and distribution but change in the food itself. For example, a hot dog from Thousand Hills Cattle Co. will be beef and celery juice taking the place of nitrates, no hormones or antibiotics.

And while those food truck lunches will come in plastic, Weber said that during the school year they’re using more compostables. For a video about Minneapolis school food, check out nutritionservices.mpls.k12.mn.us/

Elizabeth Koski thought the ranch dressing that came with the broccoli and carrots was yummy. (Photos by Margo Ashmore)