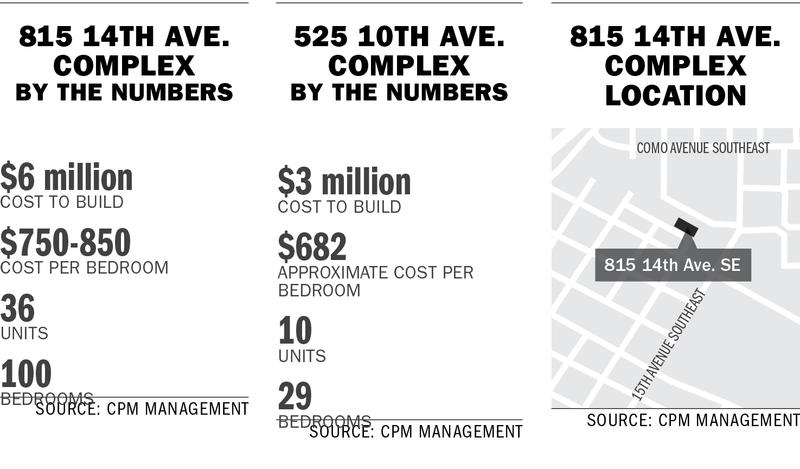 A new apartment complex could spring up alongside the main railway near the University of Minnesota campus next year.

The $6 million, 36-unit complex would be built along the alleyway between Eighth Street and the railroad tracks next to the walking bridge.

The potential unit, which CPM Property Management proposed to the city in late March, would replace Printz, a local printing shop.

“It’s a very forgotten part of the neighborhood,” said Doug Carlson, president of the Marcy-Holmes Neighborhood Association. “We were actually delighted that the city would get any good development in there.”

The complex fits in with MHNA’s small-area plan that calls for denser housing around the perimeter of the neighborhood.

The new project could be the start of a shift from industrial buildings to housing units along the railroad, Carlson said, because of a desire for more residential housing in the area.

“The land is so valuable, and the industry is not going to be able to afford that parcel for that sort of use,” he said.

Developers also saw the space as a better opportunity for housing than business.

“It’s not the highest and best use of the current land that it’s on right now,” said Daniel Oberpriller, owner of CPM. “We thought it was a good opportunity to reposition it.”

Rent would run at about $750 to $850 per bed, Oberpriller said, and the complex would open July 2014. Construction would likely start this fall.

Another CPM project along 10th Avenue, called 525 Tenth, is set to open this fall and will offer 10 units with a total of 29 bedrooms. The $3 million project will be fully furnished and run at about $682 per bed, Oberpriller said.

The different housing complexes are meant to fit the needs of a diverse range of people, Oberpriller said.

“Not everybody wants to live in a 98- to 100-unit building,” he said. “There’s something to be said that you can live with less people in a more boutique feel, closer to campus.”

With increased development in recent years, some have voiced concerns about oversaturation in the past, but city officials aren’t particularly worried.

“[We’re not concerned] at this time,” said Kimberly Holien, Minneapolis senior city planner. “As long as a project is consistent for the guidance with the land use in the area, that’s the most telling factor for us.”