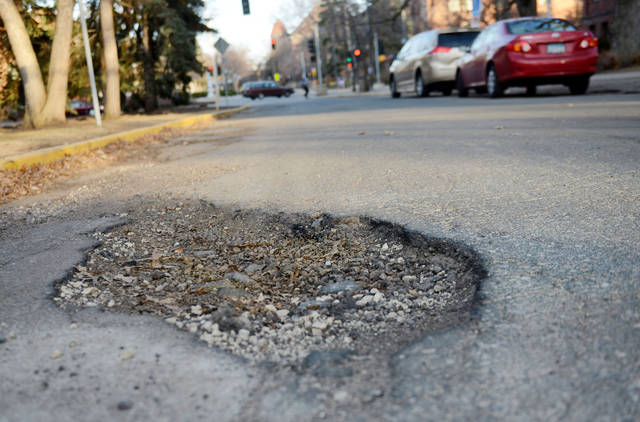 One of the many potholes that cars attempt to avoid hitting on Pillsbury Drive Southeast on the University's East Bank on Thursday. (Photo by Holly Peterson)

But the streets that the University of Minnesota operates won’t receive extra help.

The Minneapolis City Council approved an extra $1 million for pothole repair this spring. Although University roads may be suffering, too, officials say they aren’t worse than in past years.

University Parking and Transportation Services spokeswoman Jacqueline Brudlos said the extreme cold has increased the number of potholes citywide, but the severity is relatively average on campus.

The University is responsible for maintaining on-campus roads, including Church and Beacon streets southeast, and most damaged roadways around campus aren’t under the institution’s control. For example, Brudlos said Pleasant Street Southeast by Jones Hall and Eddy Hall was particularly hit with potholes this winter, but it’s owned by the city.

Pothole severity usually stays steady, Kennedy said, but this year’s level of damage is relatively high. The extra funding will extend services for the next two months, which Kennedy said will hopefully be enough time to make up lost ground.

Potholes form during cycles of freezing and thawing in winter months, he said.

Moisture seeps into cracks or fissures in pavement, Kennedy said, causing the street to disintegrate as water expands and contracts in cycles.

But with the extra funding, the city’s public works department can rent more equipment and hire additional workers, bumping the number of crews from six to nine. Kennedy said the department will also use contractors and construction crews when necessary.

City crews should minimize the future harm to streets with prevention strategies, Kennedy said. Since 2008, city leaders have promoted these tactics, which include coating streets with a sealant.

The City Council didn’t grant additional funds for pothole repairs the past two years, Kennedy said, but boosted funding by $1 million in 2011 and by $500,000 in 2010.

At the University, Parking and Transportation Services promote a pothole hotline, which allows members of the University community to call when they want a pothole fixed, Brudlos said.

This year, there hasn’t been an unusual surge in calls, she said.

Still, students are noticing the large number of deep potholes throughout the city.

Neuroscience junior Jen Richie said she sees potholes while driving from Minneapolis to St. Paul and most of them are on small streets.

Genetics junior Gillian DeWane said she hopes the potholes are filled as soon as possible.

“They’re kind of annoying,” she said.