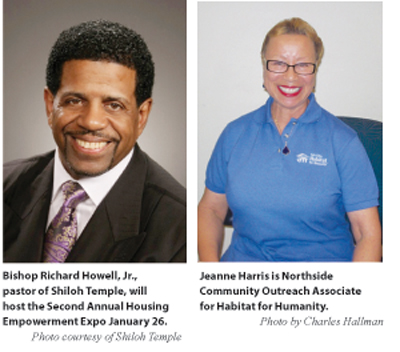 Homeownership among Blacks on the Northside has been waning in recent years, first because of the mortgage foreclosure crisis, and secondly by the May 2011 tornado. As a result, a group of North Minneapolis pastors met a few months ago and joined collaboratively to help address this issue.

This issue “is urgency to our congregations. Right now there is a small percentage of homeownership by African Americans,” explains

The pastors of these churches have become an advisory group for Habitat for Humanity, a faith-based, nonprofit organization that builds affordable housing. At least 20 percent of 2,000-plus houses in the Twin Cities the national organization has built or repaired are located in North Minneapolis.

“All of us who are African American pastors are concerned that our people will be served adequately with the right information and to motivate them to pursue homeownership,” states Howell.

“They are the real leaders of the community and true representatives of the community,” proclaimed Habitat for Humanity spokeswoman Jeanne Harris of the Northside pastors. “They have their fingers on the pulse of that community in ways in which we can never know.”

She adds that her organization “wants to be a service but doesn’t want to make assumptions on what the people need or what they’re open to. Oftentimes, we have all sort of groups and organizations that come and set up shop in North Minneapolis in order to do things for the community and to help the community; and at least sometimes, all these groups just come in on their own initiative, not having been asked or invited into the community.

“Habitat for Humanity is very sensitive to that,” continues Harris. “We felt we needed a real working relationship and partnership with the pastors on the North Side. These ministers also have a reputation of being engaged [with other organizations].

“The Northside Pastors’ Collaborative exists solely as an advisory body to Habitat for Humanity,” notes Harris. “This collaborative is trying to find ways for [more] African Americans to be homeowners.”

As a result, Shiloh Temple will host the Second Annual Housing Empowerment Expo January 26, 1-5 pm. “We will have staff from our three major programs” and set up appointments for Habitat personnel to come to residences for inspections and property assessments, Harris points out.

Habitat for Humanity is more than just a group of people providing “sweat equity” to help people build their own homes, says Harris. “Our mission is to eliminate poverty housing wherever it may be found. We build for low- and moderate-income families. We want to serve as many people as possible. Single mothers, single fathers, married couples with children — we want them to have a home of their own.

Harris says that Habitat for Humanity has had a presence on the Northside for nearly 20 years. She joined the organization last year. Among its homeownership program with zero-interest mortgages available to qualifying applicants, Habitat also offers “A Brush with Kindness Program,” which provides painting, landscaping and repairs for low-income homeowners, with priority given to the elderly, veterans, single parents and residents with disabilities. Their Mortgage Foreclosure Prevention Program offices are located in the Urban League on Plymouth Avenue.

“We are committed to making sure that you are able to stay in your home once you get in your home,” says Harris. “We’ve seen on the North Side many homes that have been demolished because they fell into disrepair. Many times the homeowner could not afford the repairs and they were forced out of their homes because of that.”

Harris added that the organization’s current focus is “an eight-block area” on North Minneapolis. “This area fell on the same path as the tornado, which sustained extensive damage. We’ve been there for at least a year trying to bring it back to life.”

“I think the information [available] on January 26 hopefully will continue the efforts in really motivating African Americans to be homeowners through Habitat for Humanity,” surmises Howell. “The need is greater now. This could’ve come at a better time. I think our president sees this as a great need as well. This should be an African American agenda — housing empowerment.”