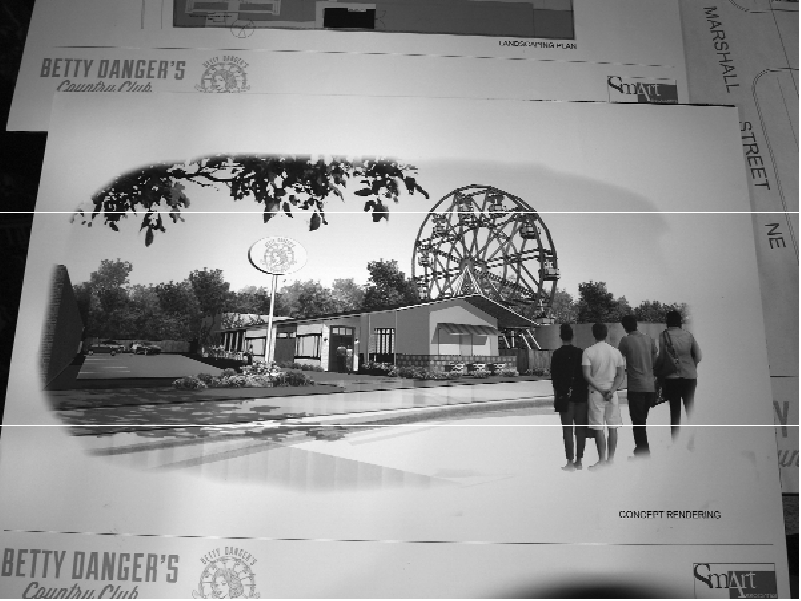 To pick up where we left off, about “Poor Betty,” misunderstood or shunned by some, embraced by others, the proposed new member of Leslie Bock’s restaurant family: The rendering of Betty Danger’s Country Club [above] explains a lot.

The former A&W, former Psycho Suzi’s at 2519 Marshall would be demolished and a new building built, said Tom Wasmoen from Smart Associates, a company that has designed many successful restaurants. Diners who choose to use the vertical revolving patio on a specially built Ferris wheel might sit in fours in partly-enclosed gondolas. The wheel would be at the front of the site, making it highly unlikely that people would see into the surrounding homes, he said.

The wheel would shut down at 10 p.m. There would be dining inside as well, and other outdoor dining. A mini-golf putting green, available only to diners, in the southeastern portion of the lot, would keep kids occupied while parents are finishing dinner, or be an additional diversion after getting off the Ferris wheel.

There was much back and forth at the Concerned Citizens of Marshall Terrace (CCMT) neighborhood meeting June 20 about the concentration of bars already within a square mile (23, according to one neighbor) and whether liquor was needed. “If you’re not going to offer at least a tap beer, you go out of business,” said another representative from Smart Associates. Tex-Mex needs margaritas so that’s why they’re not just sticking to wine and beer.

A woman said Bock told them the same things about being a good neighbor before opening Suzi’s, “but the alley was dirty from the garbage, they got raccoons, and people cut through our yards to get to their cars.” A neighbor man said “They will cut through, sit on my patio to have a cigarette. Nobody gave a s—t, the parking will be the same as what we had before.”

Ryan Eklund, who worked at Psycho Suzi’s when it was at 2519 Marshall and now manages Donny Dirk’s Zombie Den, said “we patrolled on an hourly basis. We changed our type of plastic glasses and got different cups” compared to other bars “so we could tell if it came from us.” There was argument about whether cutting through yards indicated that people were from the neighborhood or farther away.

How many jobs created? Roughly 60. How much subsidy asking for? Zero. Several spoke in favor based on getting a business site back in use and producing tax revenue.

Everyone was concerned about parking, even/especially Emily O’Brien, Bock’s designated spokesperson. (Bock attended the meeting but demonstrated she’d lost her speaking voice due to allergies.) “We all would like more parking. It will open opportunities for other businesses to grow, such as pedicabs.” O’Brien said they are researching many possibilities. “Leslie flew to Austin, Texas where they have street-legal electric golf carts.” Trolleys, shuttles, MTC, pedal pubs and multi-person pedal cabs were mentioned. “We’ll do as many bike racks as we can.”

Bob Marget from River Liquors on the southeast corner of Lowry and Marshall said he’d provided parking in the past and would hope to in the future. He said in the late 1970s and early 1980s when the Edgewater Inn and the Wig and Bottle were operating, “parking was an issue back then.” His parking lot is where the Wig and Bottle used to be.

O’Brien said the CCMT board had asked her to research other possible lots to purchase or lease. She listed off more than a dozen, reporting those who were not interested, or where she was still “researching the decision maker,” and a few that were potentials.

Wasmoen interjected that the city doesn’t require as much on-site parking as they used to, because “they want more livable, walkable cities.” He also pointed out that the site plan “has no access to the alley.”

One woman said she loves Psycho Suzi’s “but I don’t go there on the weekends, it’s a different kind of people. It’s dangerous driving past there because of all the street parking.”

O’Brien, hearing several people say the only way to cut down on street parking is to have free off-street lots, perhaps with shuttles, said “It won’t just be valet” parking.

First Ward Council Member Kevin Reich, on his way out to another meeting, said “a lot of work has been done, a lot more needs to be done. I have every confidence you will be creative and get a solution that works.” He said he would work with the neighborhood to get a checklist together of everything to be solved. “I like that building.”

A woman named Bonnie commented that “Leslie is talented. Everything she touches turns to gold. If she were really concerned about the community, she could turn it into something more family oriented and forget the beer and other booze.”

A neighbor who had been critical earlier said, “it would be great to put a business in. I’m mostly concerned about the type of people leaving, drunk, and the traffic.” A couple of others said “I love it, and I will be affected by the parking.”

It sounds like the matter may move soon to the city’s planning and zoning process. Bock’s representatives said they have had several meetings with city planning staffer Becca Farrar in preliminary site plan review, targeting an early fall construction start. Wasmoen said “they’re excited. It is more than a passing fancy.”