How do you build a 150 square foot mosaic in a month? Southwest Senior Center is doing it by bringing together more than 180 people to improve the neighborhood by creating a piece of art that will be installed on Bryant Avenue Market located at 3200 Bryant Avenue. The market has been the frequent target of taggers and is located across the street from Bryant Square Park.

The project is funded by an Innovative Graffiti Prevention Micro Grant from the City of Minneapolis and by Calhoun Area Residents Action Group (CARAG). The goal of the grant is to remove and prevent graffiti in the city.  Since a mosaic was installed on the Center’s building in 2008 as part of another grant, the taggers have stayed away.

Participants have ranged in age from five to ninety-nine and, while there are some artists in the crowd, most are first timers to mosaic. “I believe that not only are we building a mosaic, all the different people who have worked on it are a mosaic themselves,” said Jeanette Weeks, 64, who has participated in multiple workshops. She has partnered with an eighth grader from Barton, a teenager, a doctor from the neighborhood and a graphic artist in his twenties, among others. Since beginning the mosaic on September 17, the Center has held ten large workshops on site including workshops with a class from Barton Open School and an employee group from Optum Health.

The mosaic’s design was inspired by two community meetings during which participants gave their input on themes and images. Sharra Frank, lead artist, then developed the pattern, which features a winter theme and a biker. “It was interesting how many times that people mentioned winter and biking. Given the other mosaics in the community, I thought that we had something unique by doing a winter scene and it is clear that there are many bikers in the area.” 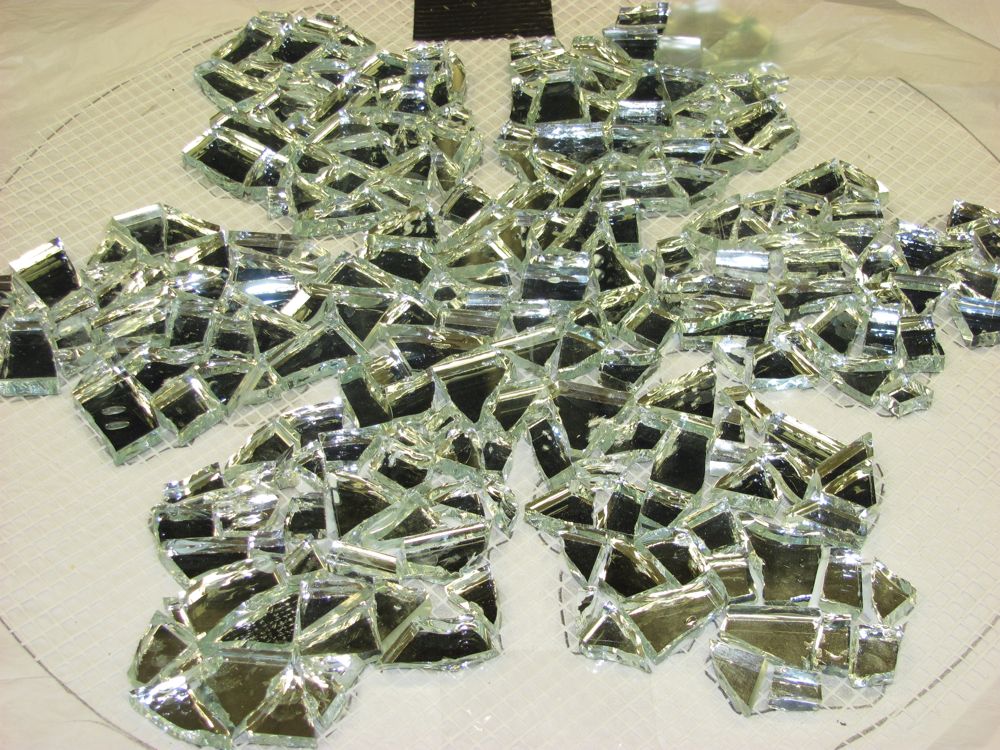 The design also lent itself to working with large groups, since it includes almost forty individual snowflakes which could be worked on by a couple of people at a time and were portable (except for the three that that are over five feet in diameter). Staff could transport the smaller snowflakes offsite, which allowed children in the after school program at Bryant Square Park and residents at Walker Place to work on them in three separate workshops. “The snowflakes also worked great when we had some of our larger workshops, where forty people would be working to create the snowflakes. We could move them around and we could encourage connections by bringing people together to make something beautiful,” said Laura Campbell, Southwest DayElders Program Manager.

Installation is scheduled for October 27 – 29, with a group of volunteers slated to work with the artist and installer. After installation, the mosaic will be covered and the official unveiling will take place on Saturday, November 19. The celebration and unveiling will begin at 10 a.m. at Bryant Square Park with a slide show of the process, followed by a parade over to the market and the official unveiling around 11 a.m. As part of the project, the market received a fresh coat of paint and CARAG’s Crime and Safety Committee plans to work with the business owner to clean the windows and remove graffiti from the glass.

Southwest Senior Center is part of Volunteers of America- Minnesota and is located at 3612 Bryant Avenue South. The Center provides exercise classes, social work, senior dining, an adult day program, computer lab, and educational and health services. For more information about the programs available at the Center: 612-822-3194, voamn.org, or mschoenberger@voamn.org.