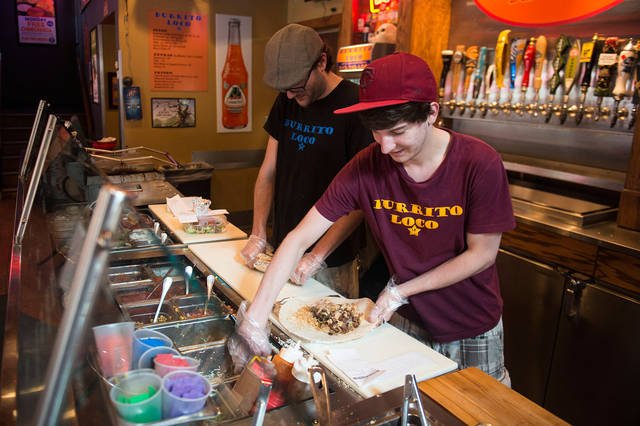 Burrito Loco manager and delivery driver Patrick Sandoz and delivery driver Cody Allen prepare food for two deliveries on Tuesday afternoon. Owner Greg Pillsbury said the restaurant's staff work hard to deliver as much food as possible, but still struggle to comply with a city law that requires 60% of revenue to come from food. (Photo by Chelsea Gortmaker)

Since Burrito Loco Bar and Grill’s debut more than a decade ago, owner Greg Pillsbury said food sales have increased every year.

Still, the Dinkytown establishment struggles to comply with a city law known as the “60-40” rule that limits sales of alcohol to no more than 40 percent of a restaurant’s total revenue.

“If your mom meets her old roommate on the patio and they split an appetizer and each have a strawberry margarita, I’m out of compliance,” he said.

With growing frustration from city restaurants like Burrito Loco, some Minneapolis leaders say the rule needs reworking. The City Council is considering changes to the laws that require many restaurants to make no more than 30 to 40 percent of their revenue from alcohol sales.

Besides being outdated, Ward 2 City Councilman Cam Gordon, who represents parts of the University of Minnesota area, said the laws are confusing and sometimes contradictory of each other.

One section of Minneapolis city code mandates that restaurants within 500 feet of a residential zone can’t make more than 40 percent of their revenue from alcohol, while another states a stricter regulation, limiting alcohol sales to no more than 30 percent of a restaurant’s revenue.

The City Council is holding a public hearing on Wednesday for an amendment and will likely move to remove the 70-30 regulation.

The 60-40 rule’s intent was to keep certain bars out of residential areas, “so you don’t have drunks walking around the city,” said Ward 3 City Councilman Jacob Frey, who also represents parts of the University’s area.

But since that law took effect in 1983, some say it has become obsolete.

Stub & Herbs owner Josh Zavadil said the establishment doesn’t have to maintain the set ratios because their 75-year-old liquor license predates the rule.

Despite being grandfathered in, Zavadil said he’s in favor of changing the “outdated” ordinance. As alcohol becomes more expensive, businesses struggle even more to adhere to the rules, he said.

Though that amendment is still in its early stages, Frey said, he hopes to create an ordinance that regulates Minneapolis restaurants without making it difficult for them to operate.

Pillsbury said the current code isn’t effective and restaurants are left to struggle with the ratio.

“We’re pumping out as much food as we can,” Pillsbury said.

Even an ordinary patron’s bill can push a restaurant outside of the ratio, Pillsbury said.

Frey said the price of his favorite meal — a salad, burger and two beers — is about 50 percent alcohol.

And not every customer orders food with their drinks, Pillsbury said. Even if they did, he said it would be tough to keep in compliance with the law because many order multiple drinks with a meal.

“Nobody orders two or three burritos,” he said.

And as more expensive craft beers become more popular, Gordon said current city law can be even more unfair, as some brews cost as much as a meal.

Library Bar General Manager Joe Berg said he also has a difficult time staying in line with the ordinance.

He said some bar owners are frustrated that most taprooms, which are growing in popularity around Minneapolis, don’t have to comply with the same rules as restaurants.

The ratios can also be difficult to enforce, Frey said. For example, he said a bar owner could ring up a round of drinks as food to fix their ratio.

Pillsbury said he fell out of compliance for the first time last year, with about 42 percent of his revenue coming from alcohol. In that case, he said he only received a warning.

If the city began strictly enforcing the ordinance, Pillsbury said, many restaurants would likely be in trouble.