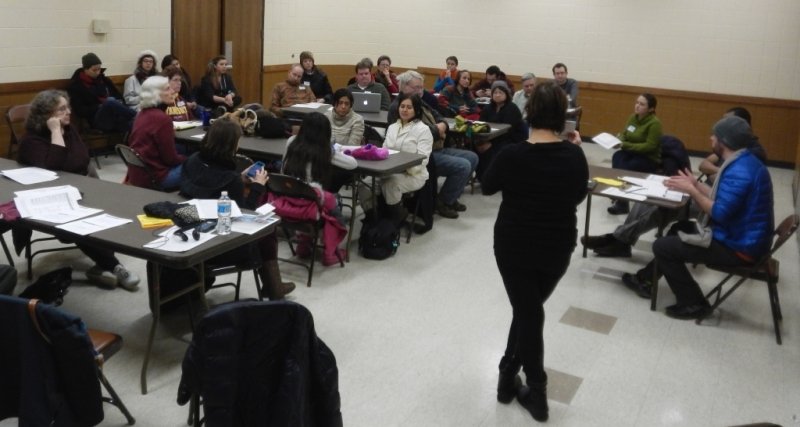 The Lyndale Neighborhood Association (LNA) is discussing whether or not LNA should support legislation to increase the minimum wage. The idea for this action was first raised from feedback gathered during canvassing that took place last fall.

In October, in preparation for the election, LNA volunteers reached out to community members to talk about getting out to vote and issues they are concerned about.

The team of over 25 volunteers knocked on 551 doors and talked with 198 community members. While canvassing, we confirmed the information we have been collecting from people coming into the community center in the past year; we have large populations of people concerned about safety, education, housing, and low wages who live and work in Lyndale.

After collecting input, the canvassers talked about ways LNA can support our community members facing economic challenges, such as increases in the cost of housing and having to work multiple jobs. A really timely opportunity presented itself in the legislation to raise the state’s minimum wage.

The current bill in the House would raise the state’s minimum wage to $9.50/hour over three years, which would increase the wages of folks who are paid minimum wage ($7.25/hour) by $2.25/hour. At 40 hours a week, that increases a person’s wage by $360/month. Community member Marissa, who has worked near minimum wage for over ten years, says she would use the extra money to “buy fresh produce like oranges and cabbage.”

When the legislative session starts, the bill will be in conference committee, which means that members of the House and Senate will be negotiating and deciding upon a final version. LNA is considering supporting legislation to increase the wage to $9.50/hour, indexed to inflation (meaning it will continue to rise with inflation over time), with some kind of tip credit for restaurants.

LNA is taking a measured approach as we evaluate options. This is because LNA has rarely gotten involved in legislation, but with the understanding that this proposal is coming out of issues identified through work with community members who are directly affected.

There are a few options for how LNA can proceed on this issue:

The canvas group has continued to talk with community members and local businesses at La Posada, the Lyndale Community Dinner, January’s General Membership Meeting, and through canvassing, to gather their thoughts on whether LNA should support the legislation. The presentation at general membership included background information, stories from community members who would benefit from an increase, and a small business owner.

Conversations with Lyndale businesses can be summarized in a couple of themes. Quite a few small, locally owned businesses support the increase and already pay around $9.50/hour or more to their employees. Chain businesses have been harder to connect with, but the ones we have spoken with have been split between negative and positive responses. Lyndale’s restaurants are concerned about paying $9.50/hour if there is no tip credit that would allow them to pay less to tipped employees.

A whole other question is whether or not LNA should take a position on this legislative issue. As Mark Hinds, LNA’s Executive Director, said in the meeting, “in the past we have only taken on a few legislative issues –around NRP and neighborhood funding.” Long-time volunteer Cindy Skrien suggested caution around this new area of work, “I support an increase in the minimum wage, but before LNA takes this on we need to think really carefully about what kind of precedent we set. If this is our first legislative issue, what comes after this?”

There are clear downsides to taking on a legislative issue. Such work could:

There are some benefits to publicly supporting an increase in the state’s minimum wage. Tim Cowdery, a board member, said that while he has worked with LNA, “we’ve tried everything we can think of to keep property values high.” At the same time, though, Tim mentioned that it’s been important to LNA to maintain the “balance of renters and homeowners [as the essence of our neighborhood’s diverse identity]…So, the only thing to do is the other side of that. Increase the money people have.”

If we take on this issue, LNA could:

During the next month LNA will continue conducting outreach on the issue. This will include canvassing residents and businesses, hosting a conversation at the next business association meeting on Feb 14th, and have a discussion at the LNA Board about what taking on this issue means Lyndale. At the February General Membership Meeting, we will come together to make a decision as a community.