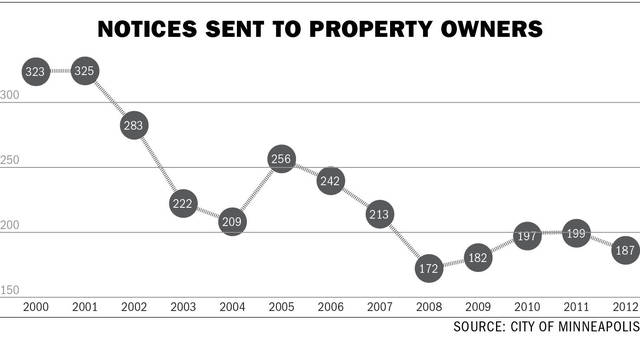 A Minneapolis ordinance that punishes property owners for crimes their tenants commit may get stricter if the City Council acts on a recommendation from city staff.

Proposed changes could increase action taken against landlords and require them to participate in workshops after their tenants are arrested or cited for certain crimes. The proposal follows a trend of increased scrutiny on landlords from the city.

The city’s Conduct on Premises ordinance was created in 1991 to curb crime. It kicks in when tenants of a property or their guests break certain laws related to noise, prostitution, gambling, alcohol, drugs or weapons.

Minneapolis police crime prevention analyst Luther Krueger said most of the notices under the ordinance come from narcotics, prostitution and weapons cases.

“These [crimes] can be very disruptive to communities,” said Kellie Jones, manager for the city’s Problem Properties Unit.

After police cite or arrest the offenders,
property owners must currently submit a management plan to the city within 10 days of the first or second incident, depending on the severity of the crime.

These plans lay out for the city why the incident occurred and how the owner plans to keep it from happening again.

“We just need to see a written management plan to see if you’re on top of things,” Krueger said.

Owners are “a little low” in their compliance with the requirement, Jones said, which is one reason why she wants to tighten the ordinance. The plans benefit the city and property owners, she said, because they’re “all working off the same information.”

“I think a lot of that is great, but I don’t want us to tip too far in one direction,” he said. “That might have some unintended consequences that we regret later.”

Currently, police may recommend the City Council revoke owners’ rental licenses if they don’t comply with regulations. In the past five years, the city has revoked 16 licenses under the COP ordinance.

One proposed change would allow for a $500 fine instead — a more reasonable “stepping stone,” Jones said, before immediate revocation of an expensive rental license.

Local property owners said they don’t run into the ordinance often — but do fine their residents for crime.

Greg Jansma, building manager for Northstar at Siebert Field apartments, said he fines residents $300 for citations to discourage criminal behavior but has to do so less than once per year.

Instead, Jansma said, he spends more time “on the front end,” letting his tenants know they need to respect city ordinances and neighborhood expectations.

“You want to stay in the good graces of everybody in the neighborhood,” he said.