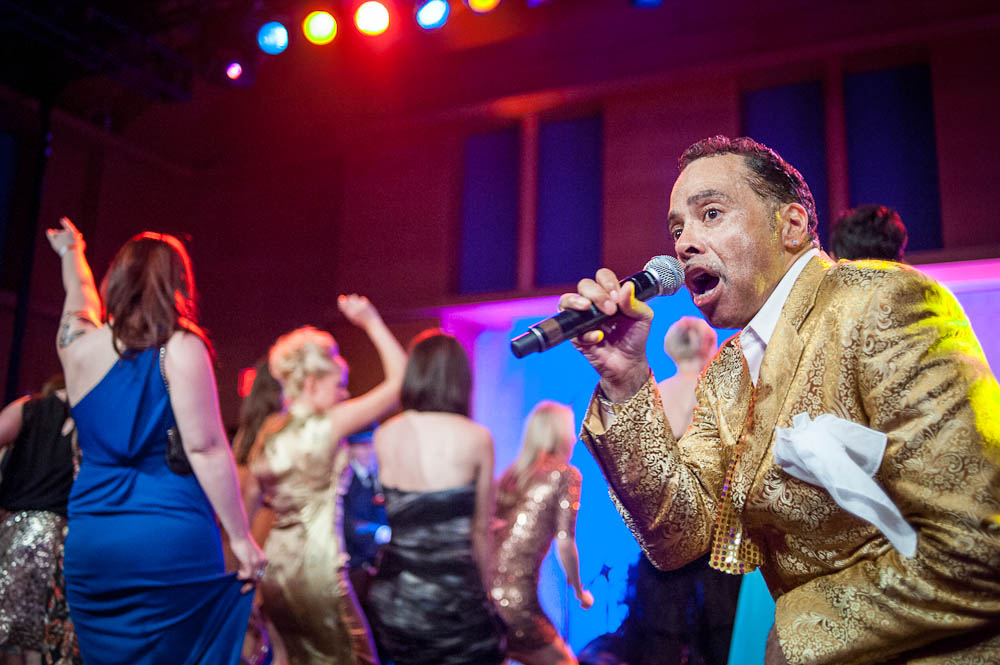 On Saturday, June 1, the Minneapolis Institute of Arts (MIA) hosted its annual Gala and Summer Party Fundraiser. Photographer Meredith Westin and I attended the Summer Party part of the evening, which featured Doomtree and the now iconic glam-rock-era-Minneapolis-Sound Morris Day and the Time. The exhibition More Real? Art in the Age of Truthiness was the inspiration for this fourth annual fundraiser.

How do you cover an event where people have paid between $85-$750/ticket, attire is “cocktail” to “black tie,” and the soundtrack of the evening is rap to funk created by two groups best known for First Avenue performances? An event that’s part high-society and part emerging-artists, a little funk and a lot of glam, but all sincerely focused on the Twin Cities arts community? I decided to ask a lot of questions learned a lot about what entices a community member to put their cash into an evening of flash.

The event was held on the third floor of the new-ish Graves-designed wing of the MIA, not in the outdoor Garden area. Neither decor nor signage suggested “Summer Party,” which was a little disappointing. Umbrellas in drinks? No. Beach Blanket Bingo? No. Garden Party Hats or Gentleman’s Jackets? No. You just climbed the wide stone stairs to the top of the building until you met up with Jennifer Steinkamp’s projection art entitled Intelligent Asteroids (asteroids inscribed with drawings and paintings that possibly collided with the Earth). Think mini-Sistine-Chapel meets Nova (or not). I walked up the stairs with an MIA supporter who explained his history of supporting the arts (not quite a Medici, but generous, still). Upon reaching the top he stated his hesitations about supporting contemporary art within the walls of the MIA (versus say, the Walker) which ended up being a statement I heard repeatedly throughout the evening. Something tells me the MIA curators hear about it, too.

The Summer Party and Gala night was full of characters like the aforementioned dapper classical arts supporter. The local paparazzi were out snapping the staged photos you’re sure to see in a glossy local mag soon. A Miss Minnesota representative as well as Krista Wanous, Miss International, were there championing their commitments to community outreach and the arts. Wanous explained the programs Free Arts MN and Art Heals, for which she advocates. Other champions of the evening included a marathoner who explained that she thinks these fancy evenings out are a great way to financially support the arts and get an insider’s look at rooms and spaces not often visited by the public. One woman, Patricia, simply loves a party and a chance to dress up (but not the chance to wait 25+ minutes for a glass of wine at the bar #partyfail).

Local fashion and design champions, a.k.a. “stylenistas” Jahna Peloquin (l’etoile magazine), Emma Berg (fashion designer/curator), and Courtney Smallbeck (drama) represented the now-generation of arts supporters. Well-heeled executives and entrepreneurs (female and male) in tailored black-tie attire accompanied glamorous partners (female and male) in flowing gowns and sequined mini-skirts. One teenage couple scored tickets from their mom (“Yeah, I have a really nice mom. No, I don’t know who Morris Day is.”) And more than one couple in their 70s, sipping on black straws in mini-bottles of Moet handed out upon leaving the Gala, responded, “The music is interesting, but a little too contemporary for us.”

The bands perhaps best represented the breadth of the evening’s reach, getting all ages and gown-lengths to get their Garden Party groove on. About 9 p.m., Doomtree began their powerhouse rap and hip-hop. What an intimate opportunity to see them perform! A huge stage meant great live action. Although Dessa and P.O.S. may be the names the public hears most often, the entire collective of performers didn’t skip a down beat note of lyrics or rhythm. Acknowledging that “this is not our typical demographic” (Dessa) and politely giving a ‘what’ya’goin’do?’ shoulder shrug when announcing the song title “F*ck Your Stuff” (P.O.S.) they let their art rip full throttle. “Things are going really well here with the fancy dresses, can we take the sound up to ‘five’ now? They can handle it” (Dessa). They gave all due respect to their genre, much to the relief of the fist-pumping fan club members in attendance. Regardless of the ‘house,’ Doomtree took up full residence for an hour-plus set.

MIA director and president Kaywin Feldman introduced the next group. Wearing an elegant and glamorous gown, she was a gracious host, thanking patrons for raising over a million dollars that evening to support the mission of the Institute. Morris Day and the Time then took the stage for a well-rehearsed, classic set of glam funk and R&B. Although a drum hiccup caused a mid-set lull, Day came back with his sexy to take us “on a journey to 1984.” Complete with funky mirror-carrying valet, Morris Day and the Time reminded everyone there what Time it was, and got the entire ballroom grooving. They are dance masters, rhythm slayers, and style makers…still.

The evening lasted until just past midnight. Strolling out through the gorgeous space of the MIA garden, I was sad that it hadn’t been an outdoor affair. But then, in Minnesota, you just never know how “chill” an evening might be.

Read Logan Adams’s review of the most recent Doomtree Blowout at First Avenue, with photos by Jeff Rutherford