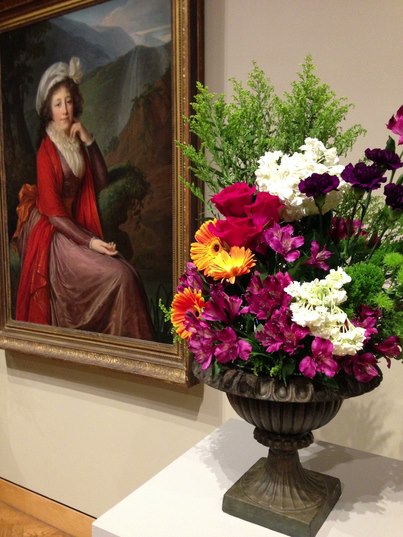 I had been looking forward to the Minneapolis Institute of Arts’s annual Art in Bloom show since March. I’d never gone before, and considering the lack of spring we’ve had this year I figured it would be a great way to usher in the new season. As with most events that I anticipate with no prior experience I set my expectations ridiculously high.

In this case I envisioned flowers everywhere—draped across every hallway and adorning every entrance. I imagined flowers sprouting from the second floor fountain and flowers spiraling down staircase railings. I basically recreated the MIA in my mind as a fantastic garden paradise; the only thing missing was the fairy dust.

I expected Art in Bloom to mystify me, and it didn’t even come close. I spent most of my time feeling bored and a little disappointed that I got an art exhibition of floral arrangements instead of a magical sensory experience, but this was mostly my fault.

I think my disappointment stems from having spent most of my adolescence from the age of 12 to 18 working at the Minnesota Landscape Arboretum in Chanhassen; spending entire summers surrounded by a vast expanse of greenery. From swamp to prairie to the dense forests all 1,137 acres was like a splendid visual playground. I can remember hiding out behind blades of sharp tall grass and daydreaming in the Japanese garden. I watched tadpoles hatch (which was gross) and watched turkeys graze (which was scary) and even though the work was arduous the flowers were always in vibrant bloom.

So, naturally I have a bit of a bias and my standards are kind of unreasonable, but regardless I think I would have still been a little let down. The only arrangement that really struck a chord with me was done by Garden Gate Flowers and I wished it could have extended throughout the rest of the show. The pastel pink roses and the white stars of Bethlehem (at least I think that’s what they were) contrasted naturally with the statically placed log and dangling moss they surrounded. This piece was staged in front of an ornate brass bar railing that could’ve given the illusion of a Victorian gate belonging to an adorable secret garden hidden form the eyes of the modern world.

It made me feel something that the rest of the exhibit didn’t, which is strange because flowers are often the simplest way to evoke a sense of the sublime. But that didn’t happen for the most part—nothing else in this show was as inspired. I’m well aware that it would have been extremely difficult to execute a wonderland of flowers throughout every corner of the museum, but why not just relegate it to one gallery? If Macy’s can fill an entire show room with flowers, then the MIA can fill one gallery.

I think that what I was looking for was something more like the ethereal ambiance of the rose garden or the Como Conservatory. I didn’t just want flowers in pots, I wanted something atmospheric and I wanted something that morphed the MIA’s environment into something foreign and esoteric. I wanted to walk into a dream of flowers that I would never want to wake up from.

You can’t always have what you want, and that’s okay. Maybe I’ll have a better time at Art-A-Whirl.