Two neighborhoods are starting to see the effects of a campus housing boom.

With a slew of new luxury apartment buildings, Marcy-Holmes is getting louder — noise complaints in the neighborhood jumped last year, reversing a decline in years before.

The increase could be blamed on a higher number of students in the area, said Nick Juarez, crime prevention specialist for the second precinct. With student housing projects bringing about 1,000 new residents to the neighborhood next year, he said the noise warnings will likely increase.

The Southeast Como neighborhood, however, continued a decline in noise complaints since 2009. Juarez said this decrease could be caused by students moving away from the area.

“We’re seeing a bit of a shift,” Juarez said.

The decrease in burglary could be attributed not only to just locking more doors and windows but also to pressure from neighborhood organizations on neglectful landlords.

“Back in 2009, there wasn’t nearly as much student housing in Marcy-Holmes, and now we have buildings going up left and right,” he said.

“A few years ago it used to be the housing was so tight you hardly ever saw a ‘For Rent’ sign,” he said.

It’s possible students are moving away from the Como area, but it will likely stay attractive because of its price range, said Ricardo McCurley, neighborhood coordinator for the Southeast Como Improvement Association.

“In our talks with students, we found that while the new housing is great, it’s expensive,” he said.

“Even though there still is a lot of price scrounging going on in the [Como] neighborhood, it’s still cheaper, and there’s a lot more wiggle room.”

New neighborhood initiatives may have contributed to the drop in burglaries.

SECIA organized a task force to pressure “absentee” landlords — building owners who are neglectful or don’t live in the neighborhood — to be more attentive to their properties.

“When the landlord doesn’t care, and the tenants don’t care, that usually means that there are going to be bad things that go down,” McCurley said. “It creates a culture of apathy, and with that, usually crime comes.”

“It appears that word has gotten around,” she said. “Over these three years the numbers of problem properties has dropped quite a lot.”

Juarez said the perception of the neighborhood can influence crime.

“It goes with the broken window theory — when other properties start to go down or look bad, the perception of the neighborhood is it’s a bad neighborhood,” he said. “That has a negative effect.”

Communication between residents and authorities is still a concern for some Como residents.

Despite less burglary and aggravated assault, Como saw an overall increase in crime from 2011-12, and is re-examining how the public is alerted to crimes that have happened.

Right now alerts are sent from the police to “block leaders” within a two-block radius of where the crime occurred. The leaders are then responsible for disseminating the information to neighbors.

But SECIA doesn’t believe this is the best method for the neighborhood, McCurley said, because of the quick turnover of students.

“The bad landlords are notorious for preying on the ignorance of their tenants and providing no [safety] information,” McCurley said.

Board members from SECIA plan to meet Tuesday to discuss options other than the “block leader” model for informing residents of the Como neighborhood.

McCurley said he’s more interested in educating students about 311 and connecting them with neighbors.

“I’m much more about neighbors who know each other and can go knock on the door at 10 o’clock at night and say ‘Hey guys, my kid’s asleep. Could you keep it down?’” he said. 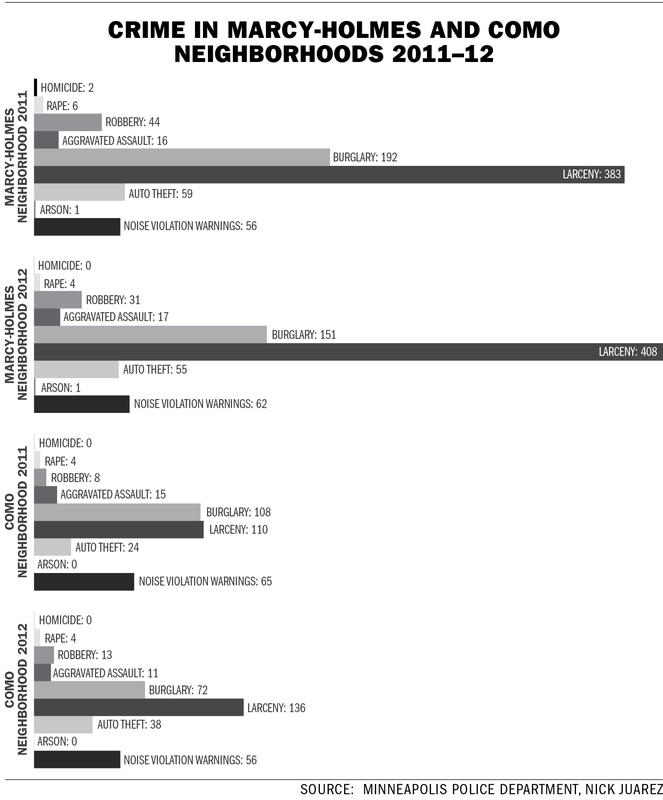