Hmong residents from North Minneapolis met with Councilmembers Don Samuels and Barbara Johnson last Saturday to ask for help in getting more Hmong police officers in north Minneapolis.  The meeting, which was half in Hmong and half in English, addressed concerns by the Hmong community that language and cultural barriers are causing them to feel they can’t go to police, and when they do, little happens.

Residents told stories of lack of responsiveness by police and of inability to communicate.

A recent report from CURA found that only two Hmong police officers were deployed in the Fourth Precinct, where Don Samuels and Barbara Johnson’s wards are located. The report, titled “Hmong Police Numbers and Deployment in Minneapolis and Saint Paul”, was funded by the University of Minnesota’s Center for Urban and Regional Affairs (CURA) for the Hawthorne Neighborhood Council and written by Research Assistant Melinda Yang.

Some 72.8% of Hmong residents in Minneapolis live on the north side, the report states.  Both Hmong police officers had night shifts.

One community member at the meeting said that he and others didn’t call the police because they can’t communicate with them.  When the man did call 9-1-1 because of an arson incident next door, the police came to the scene, but never asked the man what happened.

Another resident, Ka Kong, has eight children and has lived in Minneapolis for 15 years. Kong said that one time her relative was robbed, and when she called the police, nothing happened because “my issues are not as important as whites… they have no respect for the Hmong community.”

In another incident, Kong’s purse was stolen.  Kong called the police, and they caught the culprit, but there were no consequences for him because “the man persuaded the cops he was innocent.”  She said that it was difficult to describe what happened to the officer because of her limited English.

“I’m very upset,” said Kong.  “Why is this happening?  I trust the police less and less.”  Kong said she doesn’t feel safe in her neighborhood.  “We don’t call the police,” she said, “and when we do, nothing happens, which makes us less inclined to call them the next time.”

In a telephone interview, Minneapolis Police Spokesperson Bill Palmer said that the police department uses a paid phone translation service for working with victims who don’t speak English.  When an officer interviews a victim in person, they are supposed to call the translation service in order to communicate.  Palmer didn’t have the statistics readily available for how often the service gets used, but he said it is about once a day for all of Minneapolis.

When the Hmong community members were asked at the meeting if anyone had been offered a translation service when speaking to the police, none of the 40 people in the room had, nor did they know that such a service existed.

In response to the comments by the Hmong community members, councilmember Barbara Johnson said, “These stories are distressing.  It’s absolutely the case that we need more Hmong police officers.”  Johnson encouraged parents to talk to their children about a career in law enforcement.  “I’d be happy to set up a meeting with Police Chief Dolan,” Johnson said, to address the issue.  Johnson also cautioned that “if people don’t report crimes, statistics get thrown off,” and the neighborhood could lose police officers. 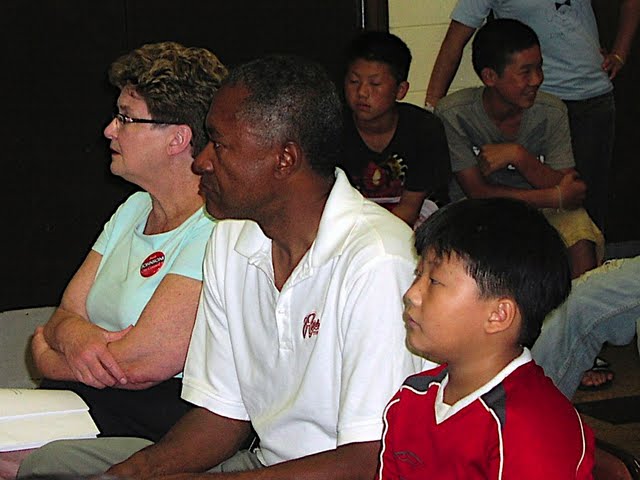 Samuels reiterated the urgency for the Hmong community members to always report crimes.  He said that if children didn’t see their parents seeking advocacy, “they will want to defend themselves — and very quickly that turns into gangs.”  He said he has seen in his own experience with the African American community that when a community doesn’t trust police, “boys will want to take matters into their own hands.”

Samuels pledged to work with Johnson to help get more Hmong officers in the Fourth Precinct, but he said unfortunately “We aren’t going to be hiring new police any time soon because of the economy, but we need to put things in the pipeline.”

That pipeline make take years, and Johnson and Samuels both said that it starts with recruiting youth to enter the police force.  In the meantime, Johnson encouraged residents to “be your own advocate,” which she acknowledged was very difficult for those who don’t speak the language.