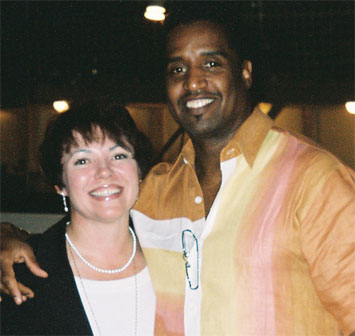 Mike Tyson rips off part of Evander Holyfield’s ear nine years ago during a boxing match, the story makes national headlines, and that’s pretty much all a large portion of the general public retains about boxers. Not a very flattering picture. Not something you want your own child to emulate.

That’s just the ugly side of a contact sport, however. “A lot of people think boxing teaches violence, but it does the opposite,” says Sierra Samuels, mom to Golden Glove boxer Jamal James, 17, currently ranked third nationally among 132-pounders. “Confidence is built up so that they don’t have to prove themselves in school or on the street,” Samuels explains.

The young fighters also recognize the value of the Circle of Discipline (COD), the gym where they learn to box. Wilshaun Boxley, like James in contention for the 2008 Summer Olympics, boxing at 125 pounds, praises boxing for the confidence and character he’s developed.

“I wanted to box since I was eight years old, but I never found a gym,” Boxley tells me as we lag behind the 20 other men who are jogging to Powerderhorn Park to run the steep steps as a part of their evening workout. Training with his current gym, COD, was like “being a part of a family,” Boxley confides.

A friend told him about COD, and Boxley began his boxing career at the age of 19, a couple years before graduating from Volunteers of America alternative high school.

When I meet Boxley, he is team-leading nine other young men under the direction of coach and trainer Adonis Frazier, son of COD founder Sankara Frazier. “Pick it up! Let’s go! Stay in line!” Boxley booms out, encouraging his team to succeed over the team on the other side of the sidewalk, led by Jamal James. But when Boxley steps over to talk to me, his voice is composed, his demeanor humble.

Diana Spiess credits his composure to the discipline imposed by the gym. Spiess, a volunteer at the Circle of Discipline since its inception in January 1993, sees improvements in the boxers’ health, weight, diet, and schoolwork. “That is, if they get serious. The harder they work, the last thing they want to do is pollute their bodies,” Spiess says, referring to the gym policy of no drugs, no tobacco, and no alcohol.

“They run every other morning, go to school, then come in at night. When they go home, they’re tired,” Spiess says. In other words, too tired to hang out on the street corner cooking up trouble.

Which is exactly what some of the youth had been doing prior to joining the Circle of Discipline. COD pulls from a wide demographic, but their mission is the same for everyone, whether the individual is four years old, 14 or 24: providing youth and young adults with alternative programs and enrichment activities by meeting their spiritual, physical, emotional and mental needs.

“[COD] is not just learning to box,” Spiess says. “The way we work with the youth, we become a substitute family for these kids. We teach them to give back to their community.”

James agrees with the idea of family, calling Adonis Frazier his stepbrother, although there is no blood relation. His mother, Samuels, a single mom, was concerned for his future and wanted to keep him out of gangs. Her sister boxed at the gym, and when Samuels brought James down as a small child, he loved it.

There doesn’t seem to be any gang in James’ future. In addition to his shot at the Olympics, his plans include attending Minneapolis Community and Technical College where he has a full two-year scholarship.

According to COD’s founder, Sankara Frazier, a seventh-degree black belt, “Boxing was a poor man’s sport; it was a way out.” What hasn’t changed, says Frazier, is that beyond that is the need to get an education, to get involved in a church, to belong, and to have a family.

COD fills that need. It meets kids where they are at, appeals to them perhaps because of the strength and power that boxing projects, then turns the kids around through hard work and tough discipline.

“If you go and do your best, you ain’t gonna hear nothing [bad] from me,” Frazier reassures youth.

The Circle of Discipline is a nonprofit organization. It is located at 1201 E. Lake St. in Minneapolis. For more information about its programs, call 612-721-1549.