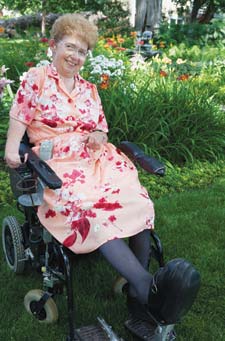 Joyce Vincent. Photograph by Sarah Whiting. "If you can see the gardens, either from the sidewalk or the alley  in back, it brings people together and builds community."  - Joyce Vincent

You’ll be forgiven for overlooking the stunning view of the Minneapolis skyline from Joyce Vincent’s house. The pink astilbe, columbine, purple dome aster, mums and daylilies are unfair competition. On any given day, someone-or several someones-will be wandering around Vincent’s gardens, often with their cameras, always with her blessing, no appointment required.

Vincent, a leader since 1983 of Metro Blooms (fka Minneapolis Blooms, and before that, Blooming Boulevards), inherited the gardening bug from her mother and grandmother. Her philosophy: “If there’s space for it, I’ll put it in. When I go to the farmers’ market and see new stuff, I can’t resist temptation.”

The physical work is done by two part-time gardeners, Joni and Jill, who answered an ad she placed-coincidentally, though they replied separately, the two women were acquainted. Such is the small world of northeast Minneapolis. For Vincent-a woman for whom sitting down is (in her words) “a four-minute process”-digging in the dirt isn’t an option.

The rheumatoid arthritis came on when she was 11. For the next 25 years, Vincent needed help to sit, stand and get out of bed.

Challenges start young
Early on, at 12 and 13, “I cried a lot,” Vincent said. “I was the tomboy, jumping off garage roofs into snowbanks. It was a tough adjustment.”

For a while, the schoolteacher came to her, but Vincent was able to attend school her senior year (“They had this big, clunky, wooden wheelchair, and another student pushed me from class to class.”) She liked numbers, so her next move was getting an accounting degree via correspondence.

“My counselor put out feelers to the Minnesota Society for Crippled Children and Adults,” Vincent said, “and they came to my house to interview me” for a receptionist/accounting position. She got the job. In 1978, MiSCCA became Courage Center. Vincent retired in 2000 as director of Courage Cards and Gifts, a program she launched in 1958.

Since age 37, Vincent has undergone a dozen joint replacements: both knees, both hips, both ankles and her right elbow. Some joints have been replaced more than once. In 2001, doctors said her right knee couldn’t be replaced again. “I was told I could have a straight leg forever, with a titanium rod, or amputation at the knee and a prosthesis,” Vincent said. “I chose straight leg forever.”

Asked what fueled her after arthritis ended her garage-roof leaps, Vincent cites her loving, resourceful parents. “They had gone through many struggles, and my dad always said, ‘If you can’t do it one way, try another.'”

She found a lot she wanted, submitted her building plan to the neighborhood board-and was rejected. Smelling discrimination, Vincent made some calls.

“One [board member] was honest with me,” she recalled, “and told me they didn’t feel a handicapped person would keep up the property.”

Now, Vincent serves on the St. Anthony West Neighborhood Board of Directors, and is active in the Boom Island Village Block Club (with 45 homes, politics don’t get much more local). Vincent supervises the kids who get “age-appropriate wages” to maintain the club’s 12 public flower gardens that dot the street medians and end caps.

One such garden-shaped like a heart-memorializes a teenager who was accidentally shot in her home. A relative was unloading a rifle, Vincent said, so nobody would get hurt.

Grounded in her local community, Vincent also acts globally. She’s active in the Minneapolis Club of Zonta International, which works to advance the status of women worldwide through service and advocacy. Among other duties, Vincent sells tickets and rounds up donated items for the annual silent auction, as well as holds the auction, which benefits causes such as Wayside House in St. Louis Park. “We did some volunteer work planting gardens [at Wayside] too,” Vincent added.

Indeed, her gardening and political activism are intertwined. Candidates for Park Board, City Council and Legislature hold fundraisers and campaign kick-off events in her yard. And to Vincent, gardening is itself-or should be-a form of community activism. It starts with visibility.

She abides by the philosophy of Metro Blooms: “If you can see the gardens, either from the sidewalk or the alley in back, it brings people together and builds community,” she said. “It’s one of the most effective anti-crime programs, because it helps people get to know their neighbors.”

Vincent encourages people to wander through her yard anytime, and to return at least monthly, because the garden is always changing-much like the neighborhood in which she’s put down her roots.

If you go:
When you’re in northeast Minneapolis, stop by and see Joyce Vincent’s garden at  38-7th Ave. N.E.