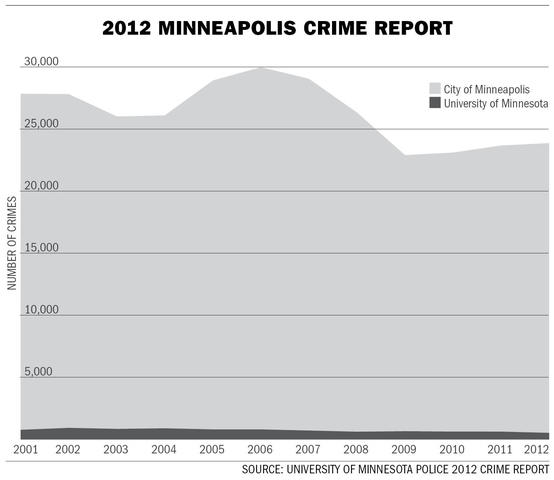 Following a national trend of a drop in crime rates, the University of Minnesota and the city of Minneapolis ended 2012 with historic lows in several categories of serious crime.

The national downward trend in crime is because of better technology and changing social dynamics, according to University sociology professor Chris Uggen.

The University recorded the lowest number of serious crimes — which the FBI defines as violent offenses and most property-related offenses — since police began keeping track of statistics in 1983.

Minneapolis finished 2012 with a slight increase in overall serious crime for the third year in a row but also had the second-lowest number of violent crimes since 1983.

Serious crime peaked in most cities throughout the country in the early 1990s, but Uggen said crime levels in Minneapolis did not begin to decrease until several years later.

Police work has become more modern and professional since then, Uggen said, which has contributed to the drop in crime.

“It’s really tough to measure because police departments vary so much,” he said, “but we know police have changed in many ways in how they do business.”

“It took a little while for law enforcement to grasp that computers are there to help us and do some of the work for us,” he said.

This came with the introduction of the CompStat accountability system, which was first used in New York City in the early 1990s and slowly trickled into departments across the country.

The system requires police to report crime statistics on a more frequent basis than in the past. Before the system was implemented, Miner said, statistics could be reported as little as once per year.

“It made police officials more accountable for reducing crime,” he said. “If they didn’t, they would get chastised in front of a large group, including the media.”

Minneapolis police adopted CompStat in the mid-1990s and University police began using it shortly afterward, Miner said. Since the introduction of the system in both areas, crime has steadily declined.

In Minneapolis, police have become much more aggressive in investigating crimes —particularly burglaries — than in previous years, said Crime Prevention Specialist Nick Juarez. Now, police are not only using technology to track hot spots but also to keep tabs on chronic offenders and get them off the streets.

“It’s all about using every resource we have available,” Juarez said.

But even though improved policing is important, Uggen said, it’s not the only factor in reducing crime.

Criminologists haven’t come up with a single reason for the national drop in crime but have named a few theories, like higher incarceration rates, more proactive policing and even the banning of lead paint in homes, which has been found to make children more aggressive.

Thefts and burglaries accounted for some of the greatest drops in serious crime in and around the University in 2012.

Police and experts said the number of property crimes is declining because of reduced opportunities to commit them.

“We can sum up reduced criminal opportunities to technology,” Uggen said.

In the second precinct, which includes the University, burglaries dropped 12 percent in 2012 — the most of any Minneapolis precinct.

“That’s good because property crimes drive up the numbers in the second precinct,” Juarez said.

In the Cedar-Riverside neighborhood, near the University’s West Bank, there were 7.5 percent fewer thefts in 2012 than in 2011.

“We’re really encouraging people to ‘hold the phone,’” she said. “When we’re distracted by our mobile device, we’re not in tune with who’s coming around us and who’s bumping up against us.”

Both Minneapolis and University police expect developments around campus will bring more challenges in coming years.

The Central Corridor light rail will be complete by 2014, and Miner said it could make it easier for criminals to reach campus.

“We had a huge influx of youth from St. Paul who would come to commit crimes through transit buses,” he said. “So people might also use the light rail for inappropriate reasons.”

Juarez said Minneapolis police are concerned about how the new housing developments in Dinkytown will alter crime patterns.

“We need to see how [the developments] will change traffic flow and people flow in the area,” he said.

Although crime in Minneapolis has dropped considerably since the mid-1990s, the decline has stalled in the past three years.

But, Uggen said, people should look at the overall improvement in fighting crime rather than the recent fluctuation.

“It looks as though we might be plateauing,” he said. “But the big picture is the significant drop we’ve had.”