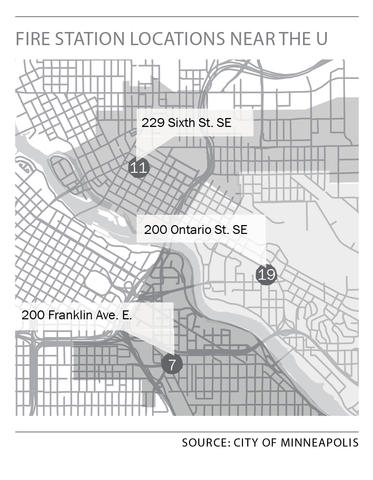 Facing dwindling financial support from the state, the city of Minneapolis will likely be forced to cut firefighter positions.

City officials and the firefighter’s union leaders have been meeting in the past week to discuss how to minimize layoffs. But Mayor R.T. Rybak has already acknowledged that the city can’t maintain current staffing levels.

“After the state cuts, we can’t afford as many firefighters as we currently have,” he said.

The city needs to trim $1.4 million from the fire department’s budget following news that the state Legislature allocated $23 million less in Minneapolis’ 2011 Local Government Aid than the city budgeted.

Fixing the fire department’s budget with layoffs alone would result in the loss of 40 to 50 firefighters, which Rybak said would be “completely unacceptable.”  He said the city may avoid significant layoffs by making retirement more attractive for firefighters.

Mark Lakosky, president of the firefighter’s union, said he is expecting layoffs to come sometime this year. Firefighters received an email from Minneapolis Fire Chief Alex Jackson last week that warned of potential layoffs in the coming months.

Lakosky expressed frustration that the fire department is a target for cuts while other programs remain untouched. He warned that fewer firefighters would make it harder to respond quickly to emergencies.

Since 2006, the number of firefighters has dropped from 424 to 403. That reduction didn’t involve layoffs, said Assistant Fire Chief Cherie Penn.

The most recent round of layoffs came in 2003 when 41 firefighters and cadets were let go. All but one was rehired months later, Penn said.

But Lakosky was less convinced. The department is already stretched thin, he said.

Due to a smaller workforce, Minneapolis fire trucks generally have just three firefighters on board, he said. The National Fire Protection Association recommends four per truck. The possibility of further reductions or layoffs raise Lakosky’s concerns even more.

The union plans to get the word out about the danger of the cuts to neighborhood groups in the coming weeks, Lakosky said.

“The hard part is there’s an inherent risk in what we do,” he said. “The sad part is that we accept it because we believe the people in charge are providing us with the appropriate amount of people and equipment.”