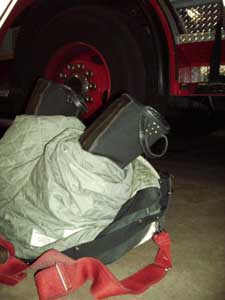 Boots await their owner at Station No. 1.

The aroma of cinnamon and apples wafts from the kitchen to the living room, where the TV anchorman talks about the latest news. The smell comes from a delicious freshly baked coffee pie that is spreading its smell all over the building. But it will have to wait there for some more minutes as there is no single person around to take it out of the oven and try it. Actually Minneapolis’ Fire Station Number 1, located close to the Metrodome, where just a few minutes ago four firefighters sat around the kitchen table, is a deserted place since the alarm went of a few seconds ago.

One can read about firefighters in the newspaper very often. Recently there were more reports on budget cuts and new response time standards than on the actual work they do every day. But as Christmas is coming closer, the busy time for the fire stations is about to begin. It’s not only about burning down Christmas trees. “People do things they usually don’t do,” says Mark Munson, captain at Station Number 1, the oldest of Minneapolis’s 19 fire stations. “For example, they travel more than during any other time of the year and they try to cook Christmas dinners,” And the heating season has its own risks, too.

The day had started early for the station’s firefighters. Being on their second day of a 48 hours shift, the two woman and three men started their day at 8 a.m. with routine work—less spectacular than one might expect it. Their normal routine includes inspections, training, and cleaning duties. Sometimes nothing happens for hours. To avoid cabin fever, the firefighters try to keep themselves busy. For example, the whole teams goes grocery shopping with the fire truck, or single members go running while the engine follows them everywhere they go, as they have to be prepared for an emergency every single minute of the day. But then—they might be vacuuming the floor—this peaceful situation changes within seconds when the alarm goes off. “Wait, we have a run!” is what they tell people who are talking to them on the phone before they hang up.

How can firefighters handle those sudden adrenaline kicks? “It is especially hard when you just got up from sleep,” says Isabel Moreno, one of Station 1’s firefighters. As many colleagues suffered from heart attacks caused by their exhausting job, the alarm system was changed a few years ago. Now lights go on first before the alarm rings. Different types of alarms signal the team if it is a medical or a fire emergency. In case of the latter, they would have to change into their fire uniform within about 20 seconds. This is only possible as their boots and pants are standing in front of the fire truck all day. The engine company and the command truck leave the station within seconds. The first unit has to arrive within five minutes or less after 911 was called.

After they left, it is suddenly very quiet. The doors of the station close automatically behind the rig, leaving the station deserted. The two pairs of shoes, that the firefighters jumped out of to change into their boots are lying on the floor in the middle of the garage next to where the fire truck was parked only a few seconds ago.

Unlike what people often think, firefighters don’t only fight fires. 911 is called due to lots of different reasons. The variety of incidents ranges from a smoking monitor to window washers that are stuck high upon a skyscraper. Fires are only a small part of what firefighters are challenged with all day. In 2004, only 6 percent (or about 2,000 total) of all incidents reported to the Minneapolis Fire Department were fires compared to 66 percent (or 21,500) rescues and emergency medical services. “This other day a little girl on a day camp put a key chain ring on her finger and couldn’t get it off anymore” says Moreno. The population of Minneapolis seems to know how to prevent its firefighters from getting bored. That morning Station 1 had to response to three medical emergencies and one small fire. “It’s a medical call, that’s a mercy for us!” says Michael Korogi, who is the engine’s captain that day, before he jumps on the rig. After fighting fires, the firefighters have to change their smoky clothes, and need to clean up their equipment. Taking a shower to wash away the strong smell of smoke is only possible when they are lucky and they have time before the next alarm. Sometimes it happens that they are just taking a shower when the alarm announces the next run. Then they have to get dressed as quickly as possible. “The hard part is to slide the pole when your hands are still wet,” says a smiling Elizabeth Pierson, the fire machine operator. This is one of the reasons why newer fire stations only have one single floor without poles or stairs. Too many firefighters hurt themselves on their way to the fire truck.

When they drive to work, firefighters never know which kind of a shift awaits them. “Sometimes you have to get up three to four times a night,” says Isabel Moreno “This is especially hard when this night is followed by a hard day during which you don’t even have the time to take a nap.”

But why did they want to become fire fighters, when this job is so hard? “It’s different from other jobs. We don’t do the same thing every day. And you can help people,” says Korogi.

Moreno adds, “My crew, they are my family.”

When the rig comes back from a run, the firefighters just go on with what they were doing before—vacuuming the floor or eating. And this day there is still a coffee cake waiting for them.