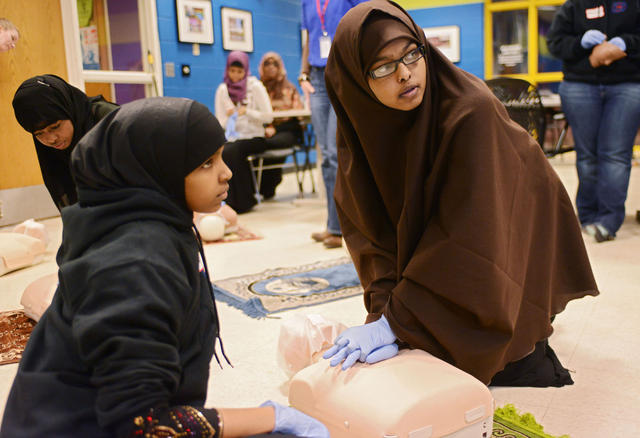 Sixteen-year-old Ubah Salad, right, and 20-year-old Mona Abdullahi practice chest compressions on a test dummy Tuesday, Feb. 19, 2013, at the Brian Coyle Center in Minneapolis. The Minneapolis Fire Department started the program to educate youth and improve relations between the department and the Cedar-Riverside community. (Photo by Emily Dunker)

One at a time, he and his crew zipped the group into a taxi-yellow suit with attached boots, gloves and hood, making them look like something out of a science-fiction movie.

The teens were trying on ice rescue suits as part of the Cedar-Riverside Youth Fire Ambassador Program. The 15-weeklong program is designed to improve the relationship between the Minneapolis Fire Department and the neighborhood’s large East-African population.

The program is led by MFD Capt. and University of Minnesota graduate student Tracy Moore and MFD Capt. Casidy Anderson.

It’s funded by a grant from the Blue Cross Blue Shield of Minnesota Foundation’s Connect for Health Challenge program, which is meant to increase social connectedness to improve health in communities, said spokeswoman Julie Ann Eastling.

The relationship between the fire department and the East-African community is strained, Moore said, and the program is meant to narrow the cultural gap.

The city’s fire department fields a number of unnecessary 911 calls from the neighborhood, Moore said. The calls can be related to a smoke alarm battery dying or minor medical problems.

The sight of a fire truck can cause fear and confusion for the East-African community, Moore said.

The program is reaching 25 people directly but a lot more indirectly, Moore said.

“We are going to teach our community about the fire department and safety, how to get out of a burning house,” said participant Chala Ahmed, 19. “They don’t know English so much, so we have to help them.”

Ahmed said he will pursue becoming a firefighter after the Fire Ambassador Program ends.

The learning ‘goes both ways’

Although the rescue harness Hemdi Abdujalil tried on looked heavy, it was actually comfortable, he said.

Abdujalil, a program participant and sophomore at Minneapolis South High School, said his favorite part of the program is “everybody coming together, working together [and] sharing stories. It’s really fun.”

The participants have also visited the MFD Emergency Operations Training Facility, where they tried on full firefighter suits and crawled through a burning house simulation, Ahmed said.

The teens write weekly in journals to brainstorm ideas for community safety and reflect on what they’ve learned, Anderson said.

When the participants graduate from the program in April, they will be CPR and first-aid certified by the American Red Cross and will receive a Fire Ambassador badge from the fire department, Anderson said.

But they aren’t the only ones learning from this program.

“It goes both ways. I think that it impacts the firefighters as much as the participants,” said Brandi Ziegler, a University alumna and lead youth advocate and educator at the Brian Coyle Community Center, where the program is based.

The MFD currently has no East-African firefighters, Moore said.