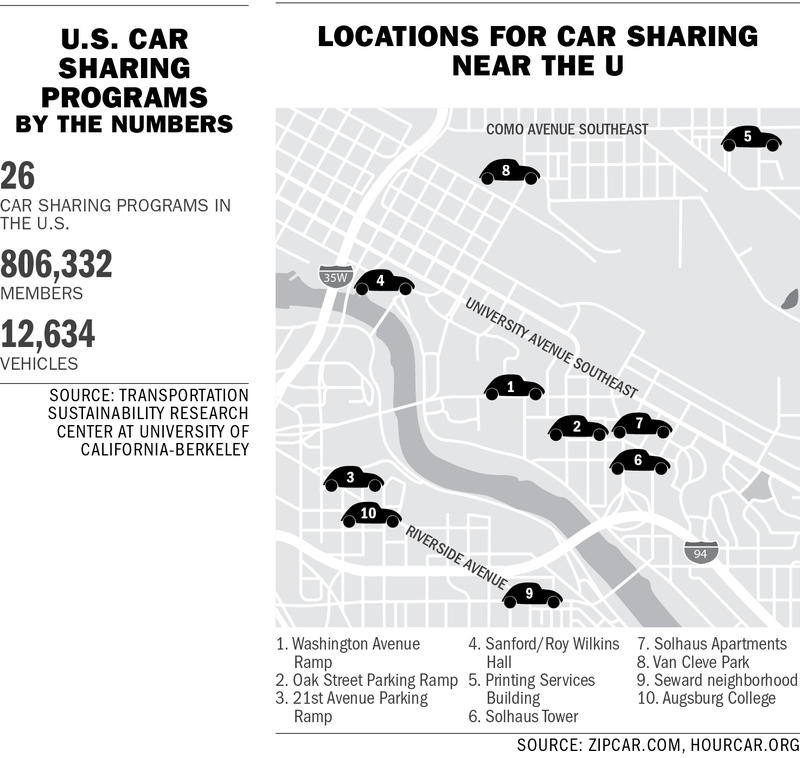 Minneapolis plans to implement a citywide car-sharing program in hopes of offering more convenient transportation options to residents and students this year.

There are currently car-sharing companies in the Twin Cities, like HourCar, and Minneapolis hopes to pair with one to expand access to residents. Car sharing is a transportation service that allows members to rent cars by hour or by day.

By April, the city will choose a company to partner with for a two-year pilot program where cars will have designated spots in more areas, including on city streets.

While there are private car-sharing services for residents in Minneapolis, the programs in place are not as comprehensive as in many other large cities.

“There’s literally dozens of cities out there that are doing car sharing and many of them have on-street components to them,” said Atif Saeed, the city’s parking systems manager. “So I think it is time for Minneapolis to try some of this out and see how it goes.”

Currently, the University of Minnesota has a partnership with Zipcar, which has five stations around campus in private ramps or lots.

The University’s alternative transportation manager, Steve Sanders, said for now, the University will maintain its 6-year partnership with Zipcar, regardless of which company the city chooses but may consider working with the city in the future if the pilot goes well.

“The advantage of having the same service as the city is to the user because they would have a bigger network of cars they can use,” Sanders said.

According to a nationwide study published by the University of California-Berkeley Transportation Sustainability Research Center, one shared vehicle can replace nine to 13 individually owned vehicles.

These numbers align with the city’s climate action plan goals, which aim to reduce greenhouse gas emissions and the number of people who drive alone by 2015.

“Car sharing is probably not the answer to everything, but it certainly allows people to take [mass] transit or use a bike as a primary mode of transportation in the city,” said Brendon Slotterback, the city’s sustainability program coordinator.

He added car sharing is good for hauling items or for quick trips.

The city noted most car-sharing businesses use newer, fuel-efficient cars, which may replace older cars on the road as people opt to rent rather than own.

HourCar program manager Christopher Bineham said about half of the nearly 40 HourCars in the area are hybrid, and five cars in Minneapolis are plug-in hybrid-electric cars, meaning they use both electricity and fuel.

Some parking ramps in downtown Minneapolis have charging stations for electric cars.

While students who use carsharing can avoid the hassle and initial costs of buying a car, repairs, gas and insurance, there are still annual membership fees and user fees each time they rent a car.

Theater junior Grace Christenson used Zipcar at the University before deciding to buy her own car last year.

“I think cost was the most important factor for not using [Zipcar] more,” Christenson said. “It’s really convenient if you have one quick thing to do but not if you have a job you have to drive to.”

With the new proposal, the city is looking to combat concerns about price. Currently, rental cars and car-sharing cars are taxed at about 12 percent, which is more than 4 percentage points higher than taxes on other goods and services in the state. As part of the climate-action plan, the city will consider lowering taxes on car-sharing services.

“In many cities, it is typical to tax car-sharing services at the same rate that rental-car services are taxed,” Slotterback said. “While that is not a huge amount, it does make some difference on what your ultimate bill is as a car-sharing customer because the market for car sharing is not the same as it is for a rental car.”

For now, the city will be reviewing proposals from several rental and car-sharing companies in the Twin Cities and hopes to have a car-sharing plan in place by the beginning of May. But Saeed said that date is tentative.

“We want to make sure we do this right,” he said.