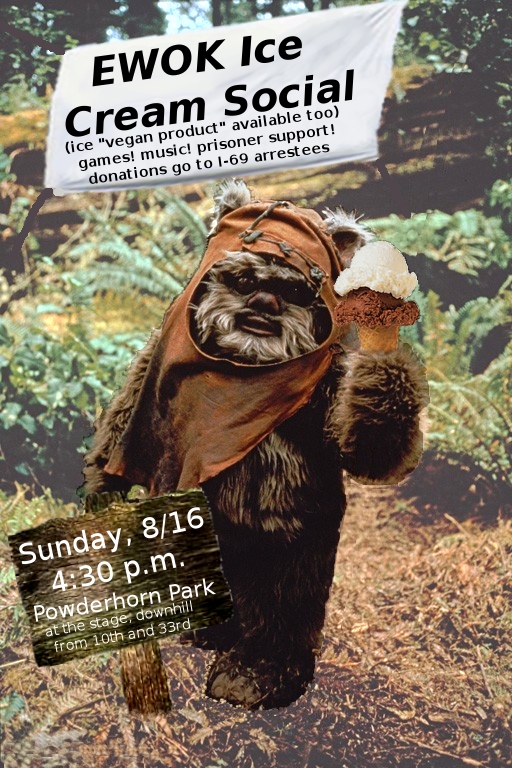 Feldman and DeMuth were founding members of Earth Warriors are OK! (EWOK), an activist group that offers support to animal rights and environmental activists facing criminal charges and prison sentences.  They met in 2005, when they were both in high school, and dated for three years, forming EWOK (which was then called Twin Cities Eco-Prisoner Support Committee) in December of 2006.

Tuesday will be Feldman’s second appearance before a grand jury in Davenport.  On October 15, Feldman said she was pulled by two FBI agents in a black SUV on her way to her parents’ house.  The agents delivered a subpoena ordering her to report to Davenport, Iowa to appear before a federal grand jury.  The subpoena gave no information about what she was to be questioned about.  Soon after, she heard from a former high school teacher that an FBI agent had issued a subpoena for her attendance records in 2004.

“It’s so random,” Feldman said.  “I was 15 in 2004.”  She did a Google search for communiqués (a method of communication often used in activist organizing) in Iowa around 2004, and she concluded that she might be questioned about a Animal Liberation Front (ALF) action in which 401 laboratory animals were freed from the University of Iowa.  When she spoke to a defense attorney before her first grand jury appearance, he had independently concluded that she would be questioned about the ALF action.  Feldman denies any involvement with that event.

On October 17, when Feldman appeared before the grand jury the first time, she read a statement that said she would invoke the Fifth Amendment and refuse to testify.  In an interview, Feldmen said she learned about grand juries when she volunteered for Cold Snap Legal Collective, a support group for RNC arrestees.  She said grand juries are used to target activists, and that they are very secretive.  She worries that when she appears before the grand jury on November 17 she could be held in contempt of court for refusing to testify.  “They find loopholes to get around Fifth Amendment rights,” she said.

A couple weeks after Feldman returned home from Iowa, DeMuth was issued a subpoena to face the same grand jury in Iowa.  His subpoena also requires that he submit to fingerprints.

DeMuth, a graduate student in sociology at the University of Minnesota, said he believed Feldman and he were being targeted as part of federal law enforcement’s “Green Scare”  tactics.  “They [the FBI] don’t know about what’s going on with the underground organizations, so they go after the above ground groups,” he said.

Though EWOK is essentially a support network for activists facing criminal charges and prison sentences, DeMuth said that the feds may be “fishing” for information about individuals or groups that are part of underground organizations such as ALF.  DeMuth said that he worries the jury will press him to divulge information obtained in his research on eco movements such as Earth Liberation Front and Animal Liberation Front.  DeMuth said that if he was forced to break confidentiality agreements with subjects of his interviews, he would “really screwing myself over professionally.”

But DeMuth feels confident about his day in court.  “I feel really prepared,” he said. “The worse thing they could do is jail me.  No, the worst thing that could happen would be that I would give up on my beliefs.”  DeMuth then grinned.  “But that’s not going to happen, so I’m good.”

Feldman is a bit more tenuous.  She describes the whole process as surreal, and said:  “I don’t feel like I’m going to jail in a couple of days, but this could be my last time in Minneapolis for a while.”  She said she’s worried about her elderly grandmother who has Alzheimers .  Feldman is the 80-year-old woman’s caretaker.  “My grandma needs me to take care of her.  What will she do if I’m not here?”