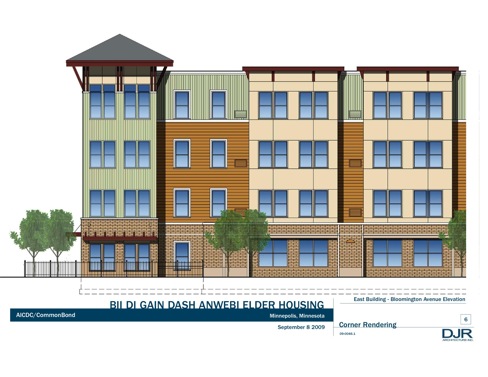 A street view of the East Building.

The American Indian Community Development Corporation, along with CommonBond Communities, was recently awarded $6.78 million from the Department of Housing and Urban Development for an Affordable Housing project in Minneapolis geared toward serving American Indian Elders.

The money comes from the Department of Housing and Urban Development’s (HUD) Section 202 Housing for the Elderly Program, according to Michael Goze, President and CEO of American Indian Community and Development Corporation (AICDC), who said that part of the awarded money will go toward rental subsidies. Goze said he hopes to break ground in the spring of 2011 but that plans for the projects completion have not been finalized.

Bii Di Gain Dash Anwebi, (Come in, Rest) will house 47-1 bedroom apartments designed for elders 62 years of age or older whose income does not exceed 50 percent of the metropolitan median household income, according to documents provided by Goze. Residents will be expected to pay 1/3 of their income for rent. 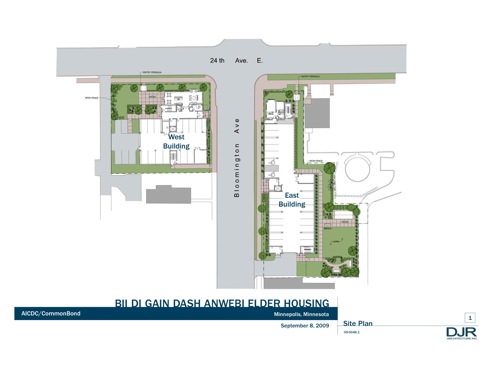 Overhead layout of where buildings will be built along 24th Street and Bloomington Avenue. The building located at the South West corner (on left) will have 18 units and the South East corner of 24th (on right) will have 29 units.

The housing complex will be located at Bloomington Avenue and 24th Street in Minneapolis, and will consist of two buildings. The building located at the South East corner of 24th will have 29 units and the building at the South West corner will have 18 units. Each building will be four stories high and have ground level parking.
Resources in the facility will include computers, information and referral and community services. Health and wellness services will also be offered on the site. The facility will be open to everyone, but will be specifically marketed to the American Indian community. “HUD 202 grants usually have a sponsor of a particular interested group,” Goze said.

AICDC was formed in 1992 and is dedicated to providing culturally specific housing and supportive services in the Twin Cities metropolitan area, according to its website. They built their first housing project, Anishinabe Wakiagun (The People’s Home in the Ojibwe language) in 1993 and since then have developed other housing initiatives and community programs that serve the American Indian community.

Goze said that ever since he began working for AICDC two years ago he had wanted to develop an elder housing facility that would serve American Indian elders.  Minneapolis currently has no such facility, although St. Paul has the Elder Lodge which opened in 1990.

Hoping to apply for funding from HUD’s  Section 202 program, Goze approached the advisory council at Inter-Tribal Elder Services (ITES), a local nonprofit serving American Indian elders, to ask them for their support in seeking HUD funding.
Norby Blake, Executive Director at ITES, said that the advisory council had been talking a long time about housing for elders, as it would serve a need in the community.  “We want our elders to be comfortable at all levels,” she said.  “Because they have worked so hard and should have something to hold on to.”  Norby said in particular having affordable housing that is wheelchair accessible and close to other entities in the community was very important.   ITES passed a resolution and wrote a letter of support to HUD for the proposal, Norby said.

Goze said the rapidity of progress on the project, from initial meetings to a groundbreaking planned for next spring, is unprecedented.

Blake said that the Advisory council has been impressed with Goze’s hard work on moving the project forward, and also with his communication with the council, as he attends meetings and keeps ITES informed on all the progress of the project. “We are just so appreciative and so excited about the whole thing,” Blake said.

ITES’s role in the project, according to Blake, will be to help American Indian elders get situated in the housing unit (through outreach and referral).  ITES will also continue to support AICDC as the project moves forward. Blake hopes that when the project is completed, ITES might move their office location from Christ Lutheran Church in South Minneapolis where they currently lease, to the housing complex itself, although that has not been finalized.  “If there were a space available we would rent there,” she said.
In Goze’s initial conversations with HUD, the HUD staff suggested that AICDC partner with a development firm that has a good track record for developing affordable housing.  After interviewing several different firms, AICDC partnered with CommonBond Communities, who had several successful projects developing and managing HUD 202 housing.  “It’s been a very good partnership throughout the process,” Goze said.

Besides funding from HUD, the project has received support from the City of Minneapolis, the Neighborhood Renewal Program, and East Phillips and Midtown Phillips neighborhoods.  Goze said that AICDC has received encouragement from Senators Klobuchar and Franken, as well as congressman Keith Ellington.  “The support as come all the way from the community level to the top,” Goze said.