At first, Jonathan Douglas was overwhelmed by the idea of a filmmaker documenting his life — his struggles with school, housing and adjusting to a new family.

After a year and a half of filming, Douglas said he and Minneapolis filmmaker Melissa Koch felt like brother and sister.

“It felt like a big relief to talk to somebody about my life,” Douglas said, “and to be able to tell the world about who I am and what I am about.”

The 20-year-old is the subject of a documentary called “The Infamous T” about his experience living with queer host parents through the local Avenues for Homeless Youth GLBT Host Home Program.

The program sets up lesbian, gay, bisexual and transgender youth between the ages of 16 and 21 with safe homes and support.

Douglas came out to his mother and siblings when he was 16 years old. He said his relationship with them was rocky at first, but now they’re close again.

He moved around constantly from homeless shelters to various apartments with his family since coming to Minneapolis from Louisiana in 2006.

“I never wanted to leave my family,” Douglas said. “But I realized that I needed to spread my wings.”

When he was 18, Douglas moved in with University of Minnesota associate professor Alex Iantaffi, his partner Michael Wright and their 7-year-old daughter through the host home program.

“It was a little terrifying at first,” Douglas said. “But we ended up becoming a family.”

The 30-minute documentary shows an 18-year-old Douglas balancing school, fitting in with his host family and struggling with being away from his mother and siblings.

Koch named the documentary she produced and directed after the three-person dance crew Douglas is a part of.

“At first we wasn’t even a dance group. We were dancing for the hell of it,” Douglas said. “Before you knew it, we started practicing and coming up with different routines.”

The Infamous T has performed in many venues throughout the city, including the University campus. 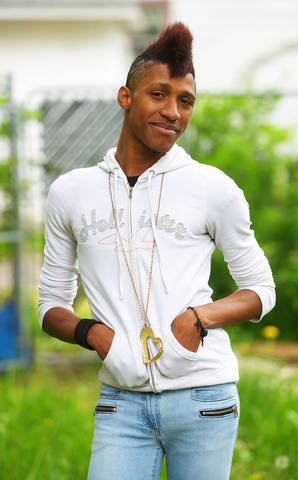 ‘A beautiful and painful illustration’

Koch initially wanted to make the documentary about chosen queer families — families created by circumstance — when she came across the program and Douglas, who was living with five other people in a one-bedroom apartment at the time.

Douglas said Koch spent a lot of time making sure he was comfortable with her filming him and asking him personal questions.

“As a filmmaker, to be given that kind of access is a huge gift,” Koch said, adding that she connected with Douglas and his friends and family.

The film won the audience awards for best short film twice after showing a sneak preview at the Minneapolis St. Paul International Film Festival in April and the Out Twin Cities Film Festival last Thursday.

After Thursday’s screening at the St. Anthony Main Theatre, Koch, Iantaffi, Douglas and others in the film participated in a Q-and-A session, where audience members had more questions than time allowed.

“The audience reaction has been phenomenal,” Koch said. “People really love the film and Jonathan and his story,”

Koch, Douglas and others from the film will travel to San Francisco for the world premiere of the finalized documentary at the Frameline International LGBT Film Festival in mid-June.

Rocki Simoes, the GLBT Host Home Program’s manager, said she plans to use the documentary while she trains future hosts who are willing to bring homeless youth into their homes.

“I think ‘The Infamous T’ is a beautiful and painful illustration of all the complexities that lead a young person to experience homelessness,” Simoes said.

Like Douglas’s experience, most LGBT youth in the program are people of color and most hosts are white, Simoes said, which is why hosts get training in white privilege and race.

“I think in some ways this documentary shows all of it in a way that I can’t just talk about as a trainer,” Simoes said. “It’s much more intimate, and it’s all there.”

At right: Local filmmaker Melissa Koch recently made a documentary titled The Infamous T, which focuses on an LGBT-identified teenager named Jonathan who experienced homophobia and homelessness during his high school years. Jonathan later conquered ambivalence after attending a new charter school and receiving support from a LGBT host family. (Photo by Jaak Jensen)

After almost two years of dinners, family trips and school events with his host family, Douglas said he has learned responsibility, structure and maturity.

“I knew it would be a new adventure,” Iantaffi said. “None of us are going to get everything right all the time, and that’s OK.”

School was often a troubling experience for Douglas.

Douglas was bullied for acting effeminate and “sounding like a girl” in middle school, where he got into fights and was eventually expelled.

He transferred between Minneapolis high schools until he found the Minnesota Internship Center’s Safe Circle, which accepts LGBT students.

“Finally, I found a class that actually fit me,” Douglas said. “So I could actually be myself.”

He said most of his classmates came from a rough background, which is how they were able to relate to each other.

He graduated from the school in January and will attend Minneapolis Community and Technical College this fall.

“They pushed me to do stuff, which is good,” Douglas said. “Some people, you know, they just need a little push.”

He plans to move into his own apartment by July.

“I’m a little afraid to wake up to myself and live alone, but I’m ready,” Douglas said. “After I graduate from MCTC, then I can really shoot for the dreams that I want.”