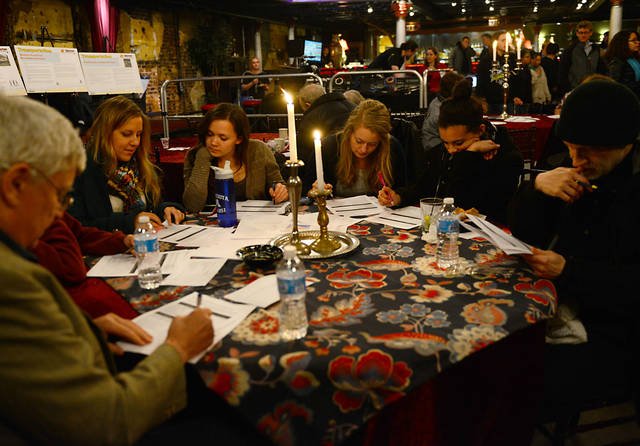 Attendees of the small area plan meeting discuss the possible futures of Dinkytown on Monday night at Varsity Theater. The meeting had a record number of attendees with over 120 people participating in the discussion. (Photo by Juliet Farmer)

The unprecedented city planning for Dinkytown is nearing an end, but some stakeholders are concerned about the plan’s current direction.

Neighborhood residents flocked to the Varsity Theater on Monday for the third and final community forum on Dinkytown’s small-area plan.

The city presented the most current version of the plan, renamed the Dinkytown USA Business District Plan, to the approximately 120 people in attendance.

A 10-minute documentary showed aesthetic shots of the area overlaid with interviews of business employees, students and city staff giving their opinions on the state of Dinkytown.

Principal City Planner Haila Maze said Monday’s 104-page form of the plan was a “completed draft” but not the final version. She said the city will add the community’s most recent feedback and flesh out the report into a finished draft.

Some of those in attendance expressed concern about the plan’s power at the government level as well as its call for historic preservation.

Blarney Pub and Grill owner Mike Mulrooney said he isn’t sure how seriously the city will take the community members’ recommendations.

This draft of the plan is a study of the area, concluding with suggestions for the city to consider. Mulrooney said that’s not strong enough.

“This is stuff that we absolutely have to have,” he said. “It can’t just be something that we consider. I don’t like leaving it open-ended, because anything can be considered.”

Mulrooney said City Council members are smart people who know what they’re doing, and he hopes they take the plan seriously. He said working with city leaders rather than against them will benefit the area.

Maze said the earliest the document will reach the City Council is January 2014.

By that time, Councilman-elect Jacob Frey will likely be in office for Ward 3, which includes the Dinkytown area. Frey attended Monday’s meeting and said he followed the plan even before being elected.

Once the city adopts the plan, Frey said, it will give him leverage in implementing residents’ vision for the neighborhood.

“It’s less about me and more about them,” he said. “Legally, [small-area plans] don’t hold any significance, but politically, they can hold quite a bit.”

In its current form, the plan says the area should pursue a listing on the National Register of Historic Places. Dinkytown could be a local conservation district, which would require guidelines for design in the area.

The city hired DJR Architecture, Inc., to prepare a preliminary report on whether Dinkytown would be eligible for historic designation.

DJR owner Dean Dovolis said the area is worth preserving and the community should move forward as soon as possible so the neighborhood’s character “doesn’t get scrubbed out by redevelopment.”

Knowing how the Minneapolis Heritage Preservation Commission has considered other local districts, Dovolis said, he thinks it would approve a local historic designation for Dinkytown.

A DJR report said developers could find loopholes in the designation that would allow further construction.

Many area property owners recently formed an informal group to weigh in on policy affecting the neighborhood, mainly because the plan calls for exploring heritage preservation, which they oppose.

A strict form of historic designation could cause significant financial harm to property owners, said Gary Eidson, who owns multiple Dinkytown properties, including the building that houses Five Guys.

“We think of historical designations as a reduction in property value,” he said.

Dinkytown Business Association President Skott Johnson said the DBA is leaning toward opposing historic designation. If the area had the designation, he said, the smallest building alterations would result in mounds of paperwork for the historic committee to approve.

“Simple things aren’t easy anymore — even changing a door,” Johnson said. “It’s an eye-opening experience what you have to go through.”

Maze said the plan doesn’t mandate that the area be preserved — rather, it sets it up for the next step.

To continue, any entity — be it a business or organization — would need to pursue historic designation, Maze said.

Both business owners and landowners said the wrong type of preservation could be too restrictive for the area.

Mulrooney said the entire community should agree on the plan, including the sometimes-overlooked property owners.

“I think it’s important to get their viewpoint in here, too,” he said. “They own the property; many of us [business owners] don’t.”