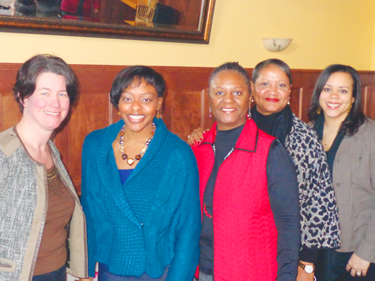 Minneapolis Civil Rights Director Velma Korbel pledged recently that her department will have a “distinct presence” in addressing issues of employment equity and monitoring construction hiring goals in the city. She also said, however, that the department is still not in a position to specify how many African Americans have found work on publicly funded construction projects.

“The [Minneapolis] City Council was very clear that they needed someone riding herd on the work that happens” in the city, said Korbel recently to a small group of city residents March 22 in South Minneapolis at an Early Mornings with [City Council Member] Elizabeth [Glidden] event. “One of the main things we are working on right now is the NFL stadium,” she pointed out.

The Minnesota Vikings stadium workforce goals are 32 percent “minority” and six percent women. “Hopefully we will work on that project to make sure that women and minorities are included,” added Korbel.

However, the MSR in previous years has published stories on the inability to report Black inclusion on city stadium projects because the supplied information from contractors and Korbel’s department did not specify any worker breakdown by ethnicity. [See, for example, reprint of ‘City confirms ballpark ‘minority’ hiring goals met.’]

When asked if her department will provide workforce numbers by ethnicity on the football stadium project, Korbel stated that federal guidelines don’t require anything besides “minority” and “women.”

“It’s a shameful thing to say, but in this state and in this region, women and minorities rarely get work on public projects unless goals are set,” she responded. “Majority companies do not put minorities and women on their contracts unless they are forced to do that.

“We talk about [hiring] goals that are set on large projects [such as] the NFL stadium and the Target Center renovation. The goals are set consistent to what the federal law says,” continued Korbel.

To a follow-up question on why her office can’t design a separate workforce data-gathering system by ethnicity, Korbel said, “We could, but…if you start going outside the lines, I think what we would end up [confronting] is the risk of not having [specially designed inclusion programs for Blacks, people of color and women] at all. We are very careful that we are following those guidelines to a ‘T.’ We are very careful not to rock the boat, or there won’t be any participation.”

When Korbel again was asked why specific hiring goals for Blacks are not in place, specifics that would prohibit city Blacks from being discriminated against or City requirements that force companies to hire them, “We have to be intentional about it,” she replied. Asked why companies that are found discriminating are not publicly disclosed, Korbel said it was disclosed when she worked at the State level, “but we haven’t gotten to that place yet in the City of Minneapolis.”

“But that one thing we have been talking about doing, because we believe and the Civil Rights Ordinance gives [us] the authority to do this, [is communicating that] if you don’t want your name to be publicized as a discriminator, then don’t discriminate.

“I’ve got great people on my team,” said Korbel of Toni Newborn and Karen Francois, who are working on investigating discrimination cases and employment equity issues respectively. “I’m probably the easiest civil rights director to get a hold of — I answer my own phone,” she proclaimed.

Newborn says the City’s Complaint Investigations Division (CID) in 2012 closed 132 cases — 76 were race discrimination complaints, and 20 percent of the cases were closed through mediation. She also is working on a three-step community outreach plan, including “setting up shop to talk to an investigator” at community organizations.

Francois added that her employment equity office “is a newly formed division” that came about after a 2012 Economic Policy Institute report found the area has the worst Black unemployment among U.S. cities. She also is working on a “racial equity in employment tool kit” for all City departments.

“[It’s] not only helping us to reflect internally, but [also] how institutional racism can be addressed by merely asking a set of questions about any policy decision or any budget decision that’s being made in the City to help determine the impact on communities of color. We are hoping to roll that out in the first quarter of 2014,” Francois predicted.

Korbel said her department this year “is really focusing” on City purchasing. “It started about a year ago to really taking a look at the money the City spends for its own benefit, and how that money is also spent with minorities and women,” she explained.

“We are a relatively small department,” concluded Korbel, who was hired nearly three years ago. “We really enforce all Minneapolis civil rights procedures, and make sure that people who live here, work here can look for jobs here…without being harassed and discriminated against.”