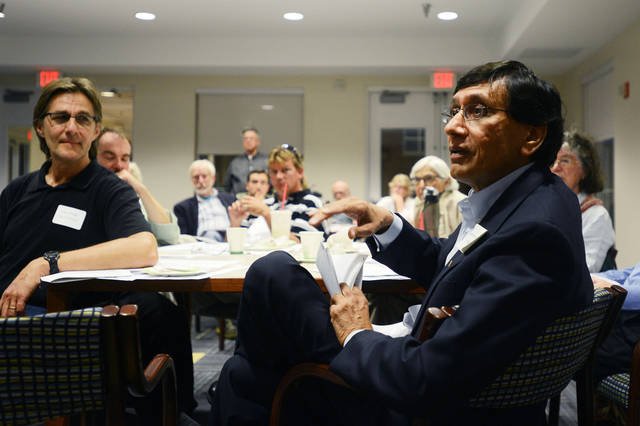 Ashraf (AJ) Siddiqui of the West Bank Commission Coalition asks a question at a land use training workshop at the Argyle House on Tuesday. The University District Alliance and Marcy-Holmes Neighborhood Association co-hosted an event to educate community members about building and city development. (Photo by Chelsea Gortmaker)

Emma Weiss remembers a different landscape in neighborhoods surrounding the University of Minnesota.

Chain-link fences and construction company signs now line streets where familiar shops and businesses stood two years ago when she was an undergraduate.

As the neighborhood has changed, community members have expressed concern. The city is now helping residents to understand what action they can take.

Approximately 40 community and neighborhood leaders attended a land use training session Tuesday, hosted by the Marcy-Holmes Neighborhood Association and the University District Alliance.

Minneapolis city planners Haila Maze and Jason Wittenberg explained a number of planning terms, like the differences between a variance and a conditional use permit, while fielding questions about zoning codes and site plan reviews.

“The city is growing at an incredible rate right now, and particularly around the University,” Wittenberg said.

The next community training will take place Oct. 29 and focus on “engaging with developers.”

Since Weiss’ graduation, many new buildings have sprouted up around the University, and more are on the way. Weiss, now a graduate student, said she attended the training because she doesn’t quite understand how the whole development process works and wanted to learn more.

“This is just the facts of how things work,” he said. “This is not a plan to stop things from happening; this is a meeting to manage them.”

Developers are buying up land to capitalize on a housing gap, which Maze said widened after the city loosened the approval process during the recession. With a fruitful market in place, a bombardment of student housing has taken the community off guard, and it’s trying to catch up.

“Ideally, this would have happened some time ago, but everybody was running fast to keep up with … development,” Tucker said. “[There’s] no time like the present to improve the ability of neighborhoods to assess projects that come before them.”

Much of the information session centered on developers and their relationship with the city, which approves their projects and the neighborhoods, where they build. Maze said the city receives emails from bewildered citizens wondering how the process works.

“Some people think we can regulate everything. Some people say, ‘Oh, you let the developers do whatever they want.’ I like to think it’s somewhere in between,” Maze said.

Tucker said community members have a tendency to voice objections on issues the city can’t control. The city can’t tell people not to park on the street in front of someone’s house, for instance, unless it’s in city code, he said.

“But there are things that are up for discussion,” Tucker said. “[This training will] be emphasizing where you can have some effect and where your arguments will make some sense to the decision-makers.”

Tucker, who is also the president of the city’s planning commission, said specific facts and data are welcome at hearings, but personal attacks aimed at private builders are not.

“Don’t come to us and say, ‘I don’t like the developer, he’s no good,’” Tucker said. “That’s not an argument. We don’t want to hear that; we want to hear about the project.”

Weiss was the only University student at the free session Tuesday. She said she lived in Marcy-Holmes previously and she’s concerned about the area’s well-being.

“I’m not sure how well it was advertised to the student population, but I would like to see more of them here,” Weiss said.